July 30 - A Legacy of Marching for Justice

August 06, 2015
Students worked feverishly during the final days in preparation for the march.  The wooden frame had been transformed into a paper mache military plane.  Tanks and other replica military vehicles were surrounded by students dressed in military gear.  The purpose:  giving honor to the university students who were killed in a massacre on July 30, 1975.

The students at the University of El Salvador in San Salvador retell the story which they have heard from survivors of the horrific event.  Forty years ago, university students marched to protest repressive military actions which had taken place at the national university in Santa Ana.  As the student march reached 25th Street, the military arrived with tanks and other vehicles.  Tear gas was fired into the student group, and shots were fired.  The tanks rolled over the wounded, pushing the student marchers onto an overpass where they were surrounded by military vehicles on both sides.  Students scrambled to escape, many jumping over the side of the bridge, becoming wounded from the fall.  To this day, the exact number of dead or disappeared students is unknown because the military authorities removed the bodies and cleaned the street with soap and water before allowing access to anyone.  Some say 20 or 23 students were killed.

Students from our sister church are leaders at the university.  They are proud of the work they are doing now to work for justice and bring peace to their home communities.  They are eager to share the work which they are doing and to honor the students who built a legacy of working for justice at the national university.  "Share these photos!" they said.  "Tell the story."  Here are a few of their photos from the July 30, 2015 march. 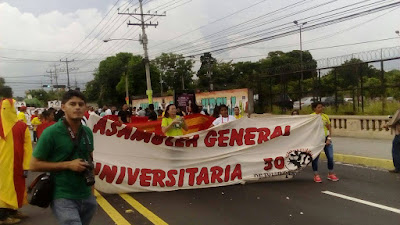 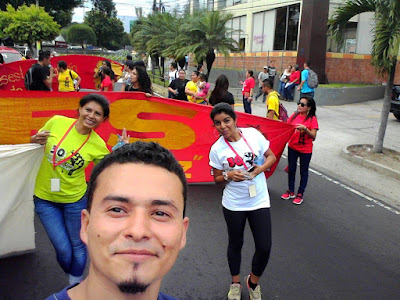 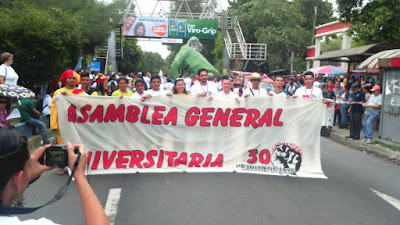 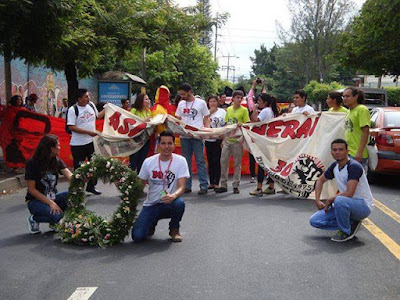 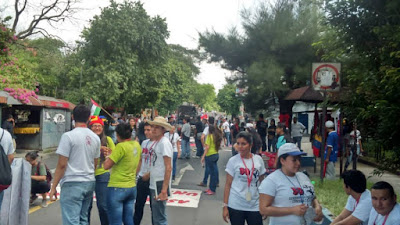