November 07, 2016
A few days ago, we held tiny sea turtles in our hands.  They were only one hour old.  We were taught how to pick them up, gently grasping them by the shell, between thumb and forefinger so their little flippers were free to wiggle through the air. 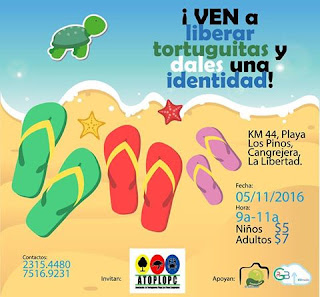 Once we arrived, we were greeted by our guide, Francisco, and were seated in plastic chairs under a palm-frond canopy.  First we would receive the charla (educational discussion) and then we would help some new baby turtles to make their first journey to the sea.

Francisco gave a passionate and detailed charla, and we really learned a lot!  We asked Francisco how he got started in this work to save the sea turtles, and he remembered a time when he was 11 or 12 years old.  Francisco's grandfather was a tortuguero (a turtle and egg hunter).  Grandfather, father and young boy Francisco came down to the beach one night to dig up some eggs.  On that night, Francisco saw the mothers digging their nests and laying their eggs.  He had never seen that before, and he realized that each little egg was a future turtle.  From then on, Francisco wanted to help the turtles.  He told us that while he did not graduate with any degree, his experience and multiple training events over the years have helped him to learn about all aspects of sea turtle life in El Salvador.

We could feel the love and respect Francisco has for the turtles.  I took just a few notes during his charla:


The banner posted under the palm frond canopy included photos of each of the 4 species found in El Salvador, along with details about their physiology and nesting habits.  Beyond what the poster says, and beyond what one might find on the internet, Francisco shared details from his years of experience.  Maybe these little facts are not super-exciting to your the person sitting at the computer reading this story, but if you have ever had a pet turtle, if you have ever held a baby turtle, if you have ever loved stories about turtles, or if you are an especially ecologically-minded person, then these details are for you:
We took photos.  We cheered them on.  We worried for the ones which were swished away by a big wave.  We were ready to scare off the giant predator birds which were fishing just off shore.

This was a great experience.  I had no idea that El Salvador was a nesting site for four different species of sea turtles.  There is something about holding one of these little guys in your hand, and helping him to take his first little waddles, and cheering him on as the waves come crashing in that makes you really care about these creatures which perhaps you have only seen in picture books or at an aquarium.

After we said good-bye to Francisco, and gave one more parting glance in the direction of the babies swimming out to sea, we headed over to the fishing pier in La Libertad.  As we relaxed with some fresh fruit frozens, a little boy came by to sell us some cashews.  We told him we had already bought some from a little girl (truth), and then he quietly patted the bottom of his backpack.  "I have turtle eggs in here, do you want those?"

Digging and selling sea turtle eggs is illegal.  All of these species of sea turtles are protected.  Clearly, there is more work to be done.