November 14, 2016
"What is the story of the screaming bride who clenches her dead baby?" we asked.


The legend may have originated in Mexico, but it is told throughout El Salvador and other Latin American countries.  Like many Salvadoran tales, this one was probably created, adapted or propagated by missionaries and priests in order to teach the native peoples a moral and societal lesson...

There once was a beautiful peasant girl who lived in the countryside near a large hacienda.  When she was old enough, she took a job at the hacienda and attracted the attention of a young man.  He was the son of the owner of the hacienda and was an educated and handsome man.  He and the girl fell in love and together they conceived a child.  Of course the girl wanted to marry her beloved, but he could not tell his parents of the affair.  The girl tried to conceal her pregnancy, but eventually her condition could not be hidden under her apron.  She was fired from her job and left on her own. 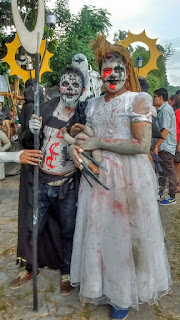 In time, the peasant girl gave birth to her baby.  She dreamed that she and her beloved and their child could be a family.  That dream was shattered when the young man married a Spanish woman of his own class and heritage.  Completely distraught, the girl went down to the flooded river and threw her child into the water.  The child was carried away by the current and drowned.  Horrified with what she had done, the young woman threw herself into the raging water, moaning and screaming after her child.

When the young man learned of the fate of his former love and his child, he could hardly live with himself.  In the dark of the night, he haunted by the moans and the screams of the young woman.  To this day, on dark nights when the waters run high, you can hear La Llorona crying for her dead child.

The majority of Las Lloronas at the fiesta were teen boys.  It really was quite impressive to see the great effort put into the costumes and the floats and the acting at this event.  What a great outlet for fun and creativity and connection with the local legends and history. 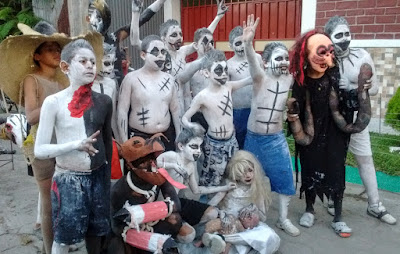 Part of the expectation for this cultural celebration is that each young person dressed in costume needs to ACT as the character that he or she is portraying throughout the entirety of the pageant and parade.  Community judges give awards to the most convincing actors.  In a time and place when youth are subject to so many dangers, I believe it is especially important that they have safe times and spaces in which they can be a little wild and goofy and let their Llorona hair down.


Making a Living on the Day of the Dead

Off the Beaten Path: Tonaca