Antonio received his miracle healing on a leg that was dead, a leg that was to be amputated, a leg that only God could heal, a leg that Antonio named his "miracle leg," a leg that lifted Antonio up out of his wheelchair and walked him to church, a leg that carried Antonio throughout his town of El Paisnal and beyond so he could testify that God is real and God heals.

Two years later, Antonio was once again in a wheelchair.   As we recognized him from a distance, we were disappointed to see that he was not walking.  Years of uncontrolled diabetes was taking his sight, and had claimed one of his feet.  We came to him with greetings and hugs, and he lit up, saying, "Look, the miracle leg still lives!"  The lost limb was not the one which God had healed, but the other.   Antonio had come to the Mission of Healing to continue the work that God gave to him, to proclaim that the miracle leg was alive.

Some time later, Antonio's body could no longer sustain his miracle leg, and he died.  As his casket traveled by pick-up through the town, people from all around El Paisnal and well beyond walked in procession.  Hundreds of people:  Lutherans, Catholics, adults, children, all those who had listened to Antonio's testimony and were transformed by it.

Again, some time later, Antonio's family invited us to come to their home for a meal.  His widow gave us a small wooden memorial with Antonio's photograph.  "God gave Antonio a special mission," she said, "and he took it very seriously.  For more than two years he gave testimony to the healing power of God.  The crowd of people at his funeral is evidence of God's work through Antonio.  Antonio lives."

A few years have passed.  Antonio's story lives on in the video he asked us to make and in the stories people share.

Back in the United States, a generous donor provides a large quantity of high quality shoes, designed specially for persons with diabetes, to our local church.  On our annual Shoe Day, people in need of shoes to protect their feet come to receive free shoes.  Many of the people suffer from diabetes.  Many live outdoors or in struggling circumstances.  At the end of our last Shoe Day, we bundled up the extra shoes.  These shoes traveled to El Salvador. 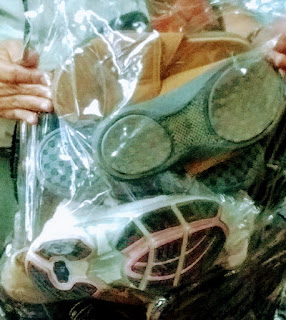 Yesterday, these shoes were placed into the hands of Antonio's pastor, in honor and memory of Antonio.  "Antonio lives," said the pastor, smiling and crying.  Antonio lives in all of the people who heard his testimony, but more than that, Antonio lives in all of the people who he helped during the war.  This is a part of Antonio's legacy, which we did not know until yesterday.  During El Salvador's civil war, Antonio worked with this pastor to file refugee papers so those in danger of being kidnapped or murdered or arrested for their work could flee to safety.  "Whenever I see one of those that we helped walking down the streets of El Paisnal, I say to myself, 'Antonio lives.'"

To have known Antonio for a short time, to have heard the story of his work during the war, to have witnessed his faithful response to God's healing and call to witness, to have eaten at his family's table and to be able to share Antonio's life and legacy with others is a true blessing.  May Antonio continue to live within those who knew him, who loved him, who have life because of him, who are transformed by his story, and who walk where he walked in shoes shared in his name.