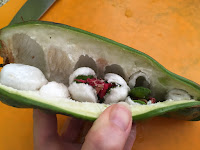 "How are the little trees, Papa?"

He smiles a big, wide, smile, his eyes squinting with delight.  "They are this high," he says, gesturing with his hand about 3 feet from the ground.  "You gave me one, two, three, four, five paterna seeds, and I collected a few more and now there are nine trees.  Some day there will be a whole field of trees.  The people walk along and pick the fruit and eat it."  After all, that is how I acquired the seeds.  Out in a country field, a friend picked a paterna fruit.  I cracked open the pod and ate the white fluffy flesh, and saved the seeds.  They were already sprouting a bit when I gave them to the Grandfather.

He is a retired pastor, but in his retirement was given a large piece of land out in the countryside.  He has spent the last several years developing a small congregation there, and planting trees on the land.  He has built a "country house." That is what he calls it.  Maybe it is made of adobe.  It has a roof and walls, but he says he needs to build la banca (which could be the sleeping platform or a bench) and a place to bathe.  "I have potable water," he says, "and with the light of the sun, I have everything I need."

He loves this place in the countryside.  It is where he was born.

He tells me he is going to paint a mural.  "I already have a little drawing of it," he tells me.  "When I was 8 years old, there were two giant nance trees by the side of the path. (Nances are small, greenish yellow fruits - sometimes sweet and sometimes sour.)  One morning, at about 5:30 AM, I went out to gather the nances because it was their time and they were falling from the trees.  And what did I encounter on that morning at 5:30 or 6:00 AM, a great group of gatos de monte (wildcats), congregating below the trees and eating the nances.  With one burst from my slingshot the wildcats dispersed, and I went and gathered up all the nances.  I took them to the market and I sold them, and I got 20 centavos!!"

"This is the picture I have in my head:  a boy below the two nance trees, fighting off the gatos de monte.  This is the mural I want to paint."

"Papa, I would like to know this place," I say.

"Siii, hija," he said, "the road out there is beautiful."  And the Grandfather tells me how to get to this special place.

"I will die in this place," the Grandfather says.  "It is good for one to die in the place in which he was born."

The Grandfather wants to put a name on this place:  "Lutheran Church Center for the Arts."  The first work of art is a field full of trees.  The second will be a mural, with a picture of a boy fighting the wildcats.