In my US home city, we talk about strengthening the safety of our city, about growing our city economically and ecologically, about building relationships among people in this way:  block by block, street by street.  This strategy is not unique to the US.  In El Salvador too, people practice this idea of tackling big problems bit by bit with small successes.  "Our phrase we like to use," said our pastor, "is sí se puede."

This weekend, we participated in an event which could best be described as a block party and it was much more than a small success.  It was fun!

Off the main road, behind the shopping center, there is a little neighborhood beside a little street which connects other neighborhoods within a city that is anecdotally and statistically unsafe.  Within this little neighborhood, families are rooted.  They built small homes in the 1960's.  They survived the war.  Generations multiplied.  Children grew and left and returned.  Elders share stories.  The children and grandchildren of the elders recently formed an association with an idea to reclaim the little street and to develop a peaceful place along its path where generations could meet and sit on benches beneath the trees.

The group organized itself well and is open to all who wish to contribute.  They chose the name:  Estación Turisticó Noé Canjura which embraces the history of the street as the "route to the station"  (the old railway station is at the end of the road) and the history of their city as the birthplace of artist Noé Canjura.  The committee did all the formal work and began organizing the community to realize their dream of a peaceful place, a historic place, a place for local tourism. 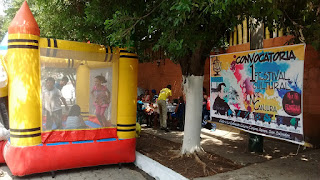 For visitors to El Salvador, Apopa is place where you turn off the bypass out of San Salvador to head up the highway to the north.  Apopa is the place with crazy bus traffic.  Apopa is the place where you meet people at the Puma gas station.  The city struggles with violence and territorial divisions.  Corruption infiltrated the local government to such a level that the mayor and his cronies were arrested and removed from office.  Apopa is home to the famous mastodon remains.  It is a city which has experienced tremendous growth and development over the past 50 years, transitioning from a small city surrounded by forest and mountains to a congested urban environment along the highway connecting with San Salvador.

The Facebook page also featured a little video of a train - a way for older folks and children to ride up and down the historic street.  Truthfully, we had doubts about the fun of riding the train, but this little train was seriously one of the highlights of our day!  Yes, we rode more than once!  The train was loaned to the neighborhood by the city of Guazapa, and it carried us up a steep hill to the nearby school, through the dusty schoolyard and back down again.  All along the way the neighbors came out to wave and take pictures.  As the day went on, people caught the train to ride down to the festivities.  We heard that on Sunday, the train actually went through the parking lot of the shopping center to promote the event and to bring people. 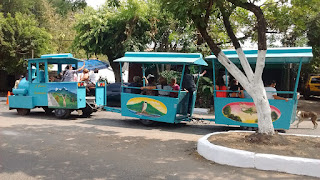 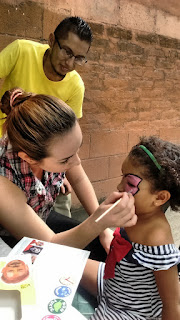 In the spirit of an art festival, local artisans were invited to share their gifts (which included a demonstration of the psychological benefits of aquaria) and to sell their artworks and handicrafts.  A neighbor with ample space hosted catered foods in a mini-restaurant, complete with white tablecloths, shade bamboo and a fountain.  (The story of how this land was divided for homes and got the name "Colonia Canjura" is too long for this post - but it is not surprising that it does involve The Grandfather)   We enjoyed a delicious lunch and a rest in the shade. 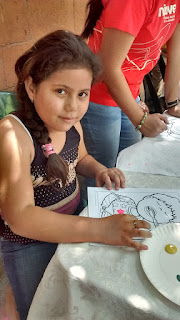 Although we did not stay for the evening featured events, we heard that the featured drama was well-done and enjoyed by everyone.  It was a story about a family in which the youngest sister was disrespected and treated badly by her siblings and her parents - a story from the indigenous people of long ago which the director re-worked to include modern elements.  The audience participated in encouraging the young girl in the story to value herself and to take her right place in the world. 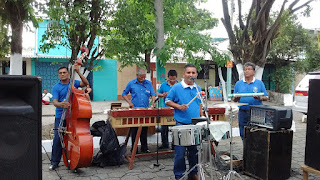 It will be fun to see how the community continues to develop this project, and if next February will bring another block party.  If so, we would definitely go again!