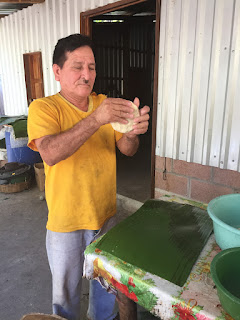 One day we rode across the lake to visit a place which holds many stories for the Lutheran Church.  After serving as a refuge for frightened and fleeing families, this well-hidden place rested.  Pablo and his friend, Rubén, made a home in the abandoned shelters, watching over the land.  They planted and they gathered.  For seventeen years they took good care to preserve and to encourage the natural beauty of this place. 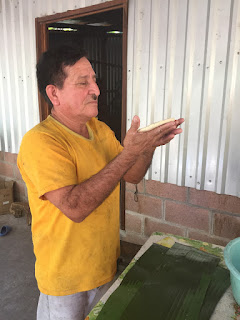 The Lutheran Church is now in a time of reflection.  Time has healed some of the wounds of war among the people, enough so that they are needing and wanting to share their stories.  The land beside the lake holds some of these stories and has the potential to be a place of healing, telling, listening and learning.  This land also has the potential to produce fruits and vegetables, coffee and herbs, which could help sustain the church.  A new guest house has been constructed from selected trees which accompanied the people when they took shelter beneath their branches.  These same trees now provide a place where people can rest and live for a while as neighbors with Pablo and Rubén.

And so, one day with a little group who came to see the new guest house, we rode across the lake and arrived to find Pablo making breakfast.  He was deftly spinning the masa in his hand, creating a perfectly round tortilla which he then placed on a rectangular piece of banana leaf.  "This is our breakfast," he said.  It's not unusual for people in the countryside to eat twice a day, with breakfast happening in the mid-morning after several hours of chores.  "A woman showed me how to make tortillas bien suavecitas (nicely soft)," Pablo continued.  "We like them this way." 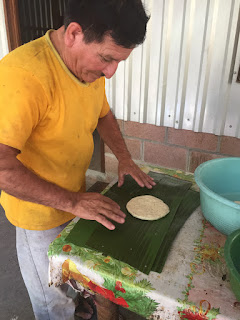 We asked Pablo to teach us how to make nicely soft tortillas, and if it was OK to take photos.  "Of course!" said Pablo.  We watched as Pablo carefully folded one side of the leaf, then folded a triangle over and over until the tortilla was encased in a tight, square package.  He placed each tortilla package into a big pot.  The packages were covered with water, and the pot was placed over the fire.  While we hiked uphill to see the view of the lake, the tortillas simmered inside their little packages.

We shared stories and songs beneath the giant avocado trees.
When it was time for us to leave, Pablo handed a pile of tortilla packages to our pastor, so we could all try the soft tortillas.  This, along with some enormous avocados which suddenly fell from the tree, was an extremely generous and appreciated gift.

Every night, Pablo and Ruben play their guitars and sing praises to God for one hour before they go to sleep.  Their faith and devotion to God, to their little piece of creation and to their neighbors is an inspiration to all who meet them and is imbedded within each bite of nicely soft tortilla. 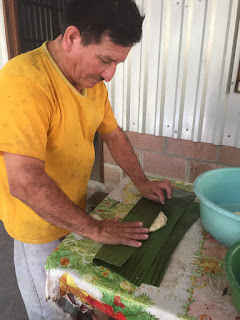 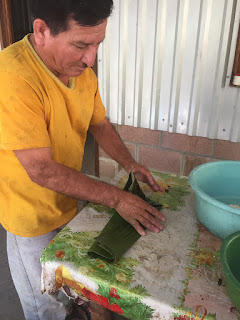 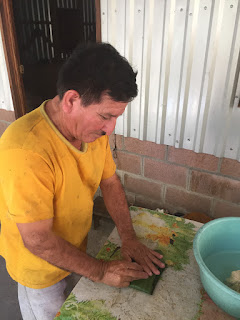 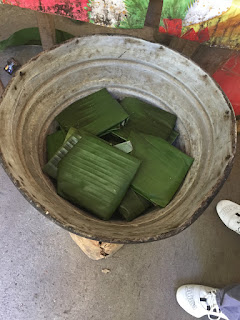 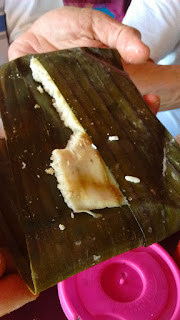