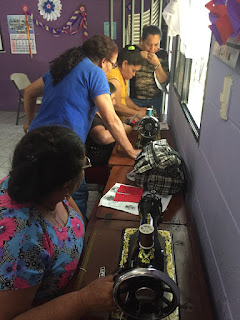 One day, a little boy accompanied his mother to a meeting.  She gathered with friends to learn about a new sewing project.  He accompanied because he was too young to stay home alone.  The meeting took place in the Casa de Mujeres (Women's House - like a community center for women in the region) outside of a small town.  Inside and out, the walls of the house were painted in beautiful shades of purple.

The little boy felt comfortable in the house.  While the women studied the patterns and the sample Days for Girls washable feminine hygiene kits, the little boy ate his breakfast and did homework in a small notebook.  He was in second grade. 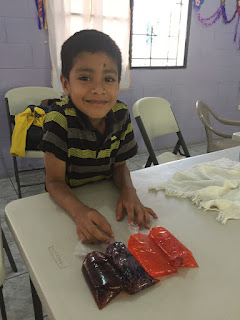 The women were focused on their project.  The little boy was bored.  He started to create his own fun.  He grabbed a few colorful streamers off of the wall - remnants from the Day of the Woman celebration a few days earlier.  The streamers became flying dragons with long flowing tails and mouths breathing fire.  "Stop running around," someone said.  The mother agreed that was enough.

The little boy borrowed a ruler and measured the streamers.  After a while he disappeared.  He was busy for a long time.

"Want to see what I made?" he asked. He unwrapped a small white towel (which formerly held his breakfast) to reveal four, small, clear, knotted bags.   "Which one would you like?  This one looks like jocote," he said, pointing to the light colored one.  "This one looks like black raspberry and this one has the tint of wine.  I will charge $1 for the wine because it is the darkest, and also for the berry.  Fiifty cents for the lighter ones." 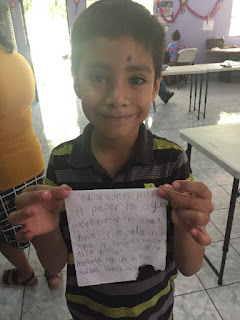 The little boy pretended to market his products.  "Bags of tinta (ink or paint), one dollar," he sang out.  "Do you think I could trick my friends?" he asked.  "This one looks like jello and I could say it is.  Then my friend would taste it and say 'yuck!' That might not be too funny."

"This boy is tremendous," one lady remarked.  She smiled.  She meant "bothersome" or maybe "too energetic."  True, he did yank down a few streamers.

"Yes, his creativity is tremendous," the visitor suggested.  It seemed quite incredible to the visitor that this little boy knew how to make water color paint from crepe paper streamers.  The boy was busy writing.

"In case you want to know how to make paints from paper, I wrote the process down for you," the little boy told the visitor.  He presented the visitor with instructions, clearly written in pencil on a white napkin:  Indications for paper in water.  Pass 1 meter in clean water and leave it in the water and after, move it [around] until you get the color [you want] and measure it into clear bags.  With the instructions, the boy included a meter of red and a meter of blue. 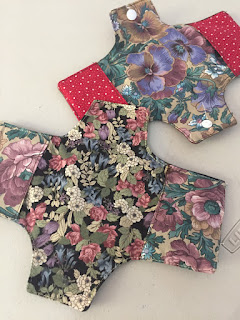 "You can use one color alone or mix them together," he said.  "That's how you get the wine color."

By the end of the morning, the women had learned how to sew the pieces of the Days for Girls kits, and were making plans for future sewing days.  The little boy changed his shirt and was ready for school.  Four small bags of paint were safely wrapped in a small white towel and tucked into the bottom of his backpack.  A white napkin and a few streamers were tucked into the visitor's purse.