Off the Beaten Path: Peace and Reconciliation Plaza

January 10, 2018
It might seem a little strange to describe a plaza  with a bright aqua 12-meter high statue located beside a major highway as "off the beaten path," but one year after its inauguration, the Monument to Peace and Reconciliation is still a bit of a hidden treasure for tourists and Salvadorans alike. 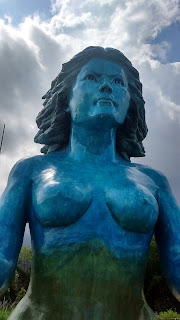 Prior to its dedication, Salvadoran opinions on the monument were mixed, and even the artist who came up with the concept design was not exactly happy with the final installation.  During the construction phase, as the bright aqua face of a woman with hair flowing in an imagined breeze peered over the silver construction fence, everyone's curiosity certainly was piqued.  Her completed figure appears as if she is emerging from the ground, and she still sparks curiosity among those who have seen her from the highway shining bright turquoise blue under sun by day and beneath brightly colored lights by night. 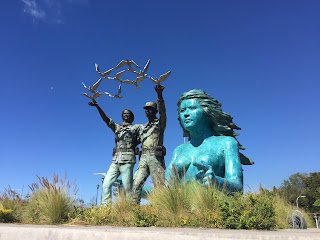 The monument is located at the exit from Boulevard Monseñor Romero onto Jerusalem Avenue in Antiguo Cuscatlán.  There are parking places right at the edge of the highway.  A beautifully landscaped path leads from the parking areas up to a tiered plaza.  At the first level, a long, narrow plaque contains the signatures of those who signed the 1992 Peace Accords, including representatives of the government and the FMLN, and UN General Secretary Boutros Boutros-Ghali. 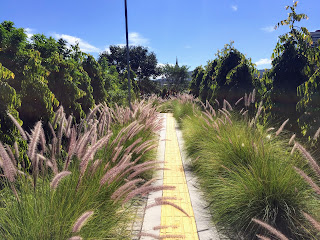 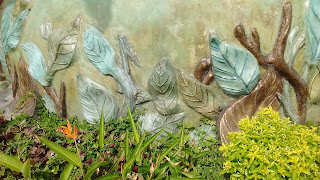 Steps lead up to the next level which features bronze statues of a female guerrilla fighter and a male soldier walking arm in arm, striding forward toward peace. Their exterior arms are raised as they release a flock of bright aluminum doves.  Behind them, towers the torso of a woman.  She is unclothed except for the leaves vines near her waist, which blend with the live plants that surround her.  Her name is Civis, a Latin word which means citizen. She represents the Salvadoran people, connected to the earth and the sea.  On her right hand she wears a ring, showing her commitment to peace.  Her left index finger points the way to a peaceful future. 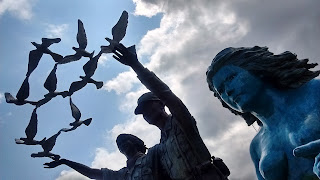 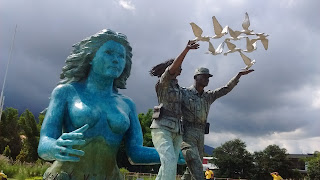 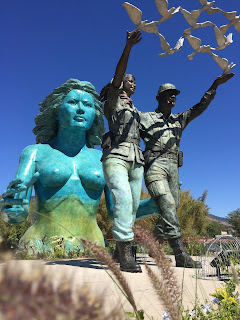 The upper tier of the plaza features a mural entitled The Footprints of the Jaguar.  The mural weaves together figures of Salvadoran history and Mayan symbols.  A helpful key identifies each image. 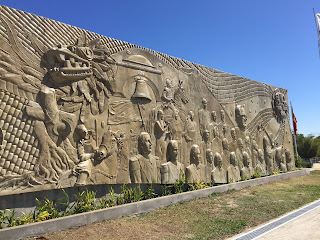 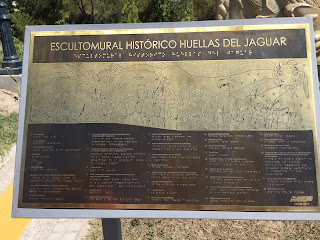 I have visited the site a few times during the past year, with small groups of North Americans and with Salvadorans.  The general consensus is that it is a beautiful, impactful, and educational monument.  I was recently there with a young Salvadoran woman who will soon graduate with a degree in teaching.  "I think all the youth should come here," she said.  "They don't know the reason that this monument exists.  They don't know the story behind the Peace Accords."

The message of the monument is that the past informs the future.  To live in peace we must learn from what has been, reconcile with one another, and walk together toward what will be. 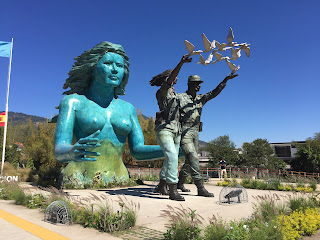 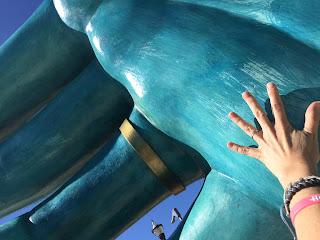 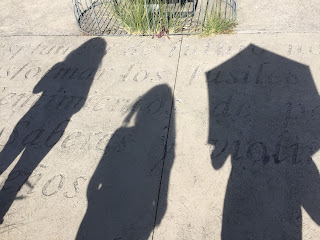