January 16, 2018
On January 16, 1992, under the supervision of the United Nations, representatives of the Salvadoran government and the FMLN forces came together and signed the Peace Accords, ending the 12-year civil conflict.

On January 14, 2018, a small congregation gathered for worship on a day dedicated to remembering the peace-work of the past and calling for the young and the old to be "artisans of peace" in the present.

The congregation and the community long for peace.  Gang boundaries run through the community and orders restrict residents from walking to church, visiting neighbors, and getting together with family who live on "the other side."  In the 1980's, members of this community lived and fought in the mountains, raised their families in hiding, traveled to the city when food ran out, worked, were politically active, and lost their sense of home.  After the Peace Accords were signed, those with weapons laid them down.  Political action replaced the action of the firing pin.  Their struggle for justice continued.  They came from different places and settled together on land which was given to them as a result of the peace agreement, but for which they still do not have legal titles. They struggled to unify themselves as a community.

The gangs moved in shortly after the community formed and took advantage of small divisions and dire poverty.  The community has suffered grave losses.  Young people and older people have been murdered.  Times of stress come and go.  The path to peace is elusive, but the struggle to find it and build it continues.  On Sunday, four war veterans crossed the line.  They gave testimony during worship.  It took guts to rise up against injustice a generation ago.  It took guts to walk across a community on a Sunday morning.

Before the scripture readings, prior to the preaching, the pastor handed each person a wooden medallion.  "God has put it in the heart of our sister to create a symbol of peace today.  Each one of us will add our own medallion to the work, and all together it will be...a tree of peace.  Whether you draw a picture or write some words... you can think about it.  Hold the medallion and don't do anything right away.  Meditate. The word of God and the preaching will speak to you." 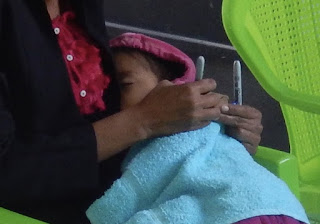 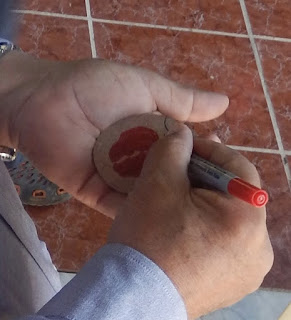 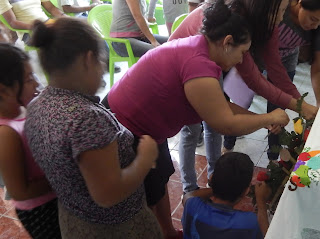 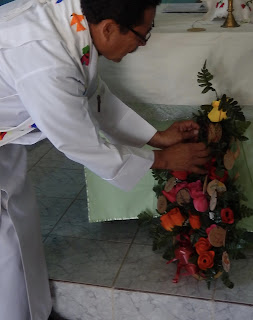 Following worship and the testimony, the people in the church created their medallions.  It was silent.  Because the Christmas tree had been put away, the people hung their medallions on a tiny tree at the base of the altar.  Now the Peace Tree stands as testimony to the hopes the dreams and the commitment of the people to be artisans of peace. 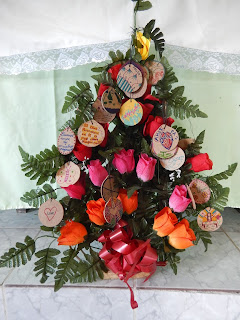 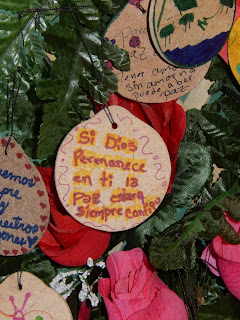 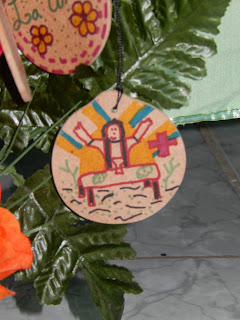 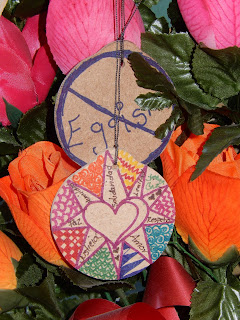 Author's Notes:  One day, a woman brought a bunch of craft stuff to my office.  In one of the dusty boxes, I found a zipper bag labeled "65 wood ornaments."  I stuck it in a perpetual "take to El Salvador" bag, noting that 65 of anything crafty has potential for a fun group activity.  Last week we accompanied our Salvadoran pastor on some home visits.  As we met with a few of the community's historic families, the pastor suggested Sunday might be a good time to honor the signing of the Peace Accords and to focus on peace.  I offered to come up with a project (picture my husband giving me an eye-roll at this moment).  As we drove home, I remembered the wood ornaments, and the idea of a Peace Tree popped into my head.  First, I want to thank God for small inspirations.  Second, I thank God for an open-minded pastor who can take a tiny idea and make it into a beautiful experience.  Third, I want to thank whoever donated those wooden ornaments.