Let's all Go to the Banquet 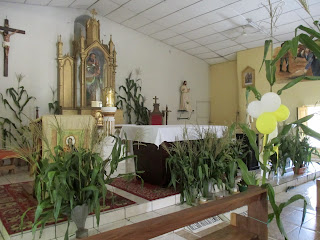 If you hang out in the Lutheran Church or the Catholic Church, especially if you have a relationship with folks in El Salvador, you are probably familiar with the song, "Vamos Todos al Banquete" or its English translation usually entitled "Let Us Go Now to the Banquet."  Composed by Guillermo Cuéllar as part of the Salvadoran Folk Mass, the song has a catchy tune and welcoming message.  The inspiration and theme of the song were derived from the sermons of Padre Rutilio Grande.  In El Salvador, we probably sing this song once a week at one church event or another.

It's one of those songs that I can only sing in Spanish, because that is how I first learned to sing it. The English translation fits pretty well with the melody, but like any translation of lyrics or poetry,  it is a little stilted and some of subtle meanings are lost.

We sang "Vamos Todos al Banquete" on Monday, during Communion.  There were a lot of people in church, so we made through the cycle of verses a few times.  I was daydreaming a bit, and a conversation from a few years back came to mind:  I was walking with our Salvadoran pastor to an event at a local soccer field.  A group of guys walked by carrying brightly colored plastic stools.   "You should have brought your taburete," he said.

"Oh...like the song."  I realized up until that moment that I had no idea that a taburete was a little stool.

Singing the song during Communion and remembering this soccer-field conversation got me thinking about a writing up a contextual translation of this very favorite and popular song.  My attempt at that follows.  Each verse is written in Spanish side by side with the traditional English translation, followed by my idea of a literal translation with some context.

Let's all go to the banquet, to the table of creation.  Each one with his little stool has a spot and a mission.  The taburete is a small stool which the farmers carry with them, along with their machetes and tecomates (gourd) canteens.  The stool is typically with a string or small rope slung over the shoulder.  Everyone, including the humble farmer, has a place at the table and a mission in the church.

Today I get up very early; the community is already waiting for me.  I am joyful climbing up the hill.  I go in search of your friendship.  Cuesta  is a Salvadoran word literally means "costs."  When Salvadorans climb a steep hill and are short of breath or very hot, they say "cuesta" - that cost me!  So even though it is taxing to walk up the hill to worship, we are joyful because the community is waiting and we will find friends.

God invites all of the poor, by faith, to this common table where there are no hoarders and no one lacks something to go with their tortilla.  "Con que" literally means "with that" and refers to the simple things that Salvadorans eat with their tortillas, such as a bit of salt or cheese.  At the Lord's table, there are no wealthy people eating more than their share, and the poor have more than just plain tortillas.

God commands us to make a table of brotherhood from this world, working and fighting together, sharing the property.

God's banquet is ready, let's grab our stools and go!

Here is a link to a music video. 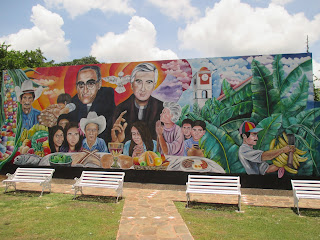