The Day of the Magi Kings

January 08, 2019
On the twelfth day of Christmas, all across the globe, Christians celebrate the first day of Epiphany.  Epiphany means revelation.  The story of God revealing little Jesus as the King of Kings to the world outside of land of Bethlehem is recorded in the Bible, in the Book of Matthew.  We are told that magi from the east interpreted the appearance of a new star in the sky as a sign of the birth of a king.  Following the star, the magi eventually end up at a house, where Mary is with the little child Jesus.  The foreign visitors bow down to worship the child and present gifts of gold, frankincense and myrrh.  Theologians reflect on the meaning of this revelation -Jesus who was born in humble circumstances is identified as the King of the Jews, sent not only for the salvation of the chosen people of Israel, but for all the world beyond.

In a mix of theological symbolism and legend, "magi" became three "wise men" named Melchior, Caspar and Balthazar, who rode on a horse, a camel and an elephant for 12 days through the desert, following a star.  They represented Europe, Arabia and Africa with gifts of gold (for a king), frankincense (representing the divine) and myrrh (foretelling Jesus' death).  Throughout Latin America, the Feast of Epiphany is celebrated as the Day of the Magi Kings.  In many cultures, Epiphany is a time for special foods, parades, sports events and gifts for children.  In El Salvador, the celebration is a little bit more simple...unless it is an election year.

I have been to worship in our Lutheran Church in El Salvador on more than one Epiphany occasion.  Little children have processed wearing crowns.  There is always a thoughtful sermon.  Usually there are some songs about light shining around the world.

This year, the Lutheran Church was one of the sponsors for an event at the community soccer field.  Other local leaders were identified as sponsors.  It seemed the Day of the Magi Kings would be a day for a divided community to come together.  We gathered up food bags, piñatas, and toys and headed for the field.

Gang boundaries govern where local families can and cannot walk.  We walked to the soccer field, and there were no soldiers in sight.

The field is best described as a big patch of fine, powdery, gray dust.  We walk around little puffs of dirt as a woman sweeps the last bits of trash across the field and into a small pile.  Everyone heads for the shade.  Faces from the past surround a new generation of little ones who bounce balls on a giant parachute.  I have not seen some of these dear, old friends for 10 or 12 years.  It's like a miracle.

Children play with the parachutes.  Adults do too.  Youth and old ladies stand under the trees, chatting.  We gather the sights in with our eyes and our cameras, because children whacking at piñatas is always a cute photo op and an adventure in safety.  Little numbers are given out to everyone in preparation for a series of raffles of baskets and bags of food.  A young man who I have known since he was a little guy somehow did not get a number.  "Take mine," I say, telling him I always win.  He is one of the first ones to win a bag of food. 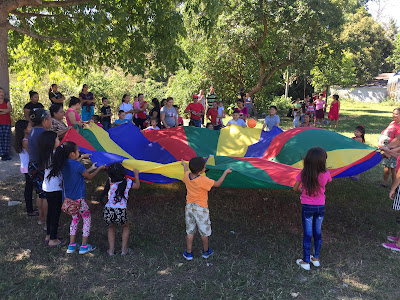 The piñatas, the food baskets and the toys (which will be given out at the end of the event) were donated by the FMLN.  The Presidential election is one month away, and campaigns are in full swing.  Some adults leave the event as a local party leader's political speech encourages votes for Hugo, the FMLN candidate.  Some leave as soon as they see FMLN red.  A few people are wearing t-shirts with "Hugo" written across the back.  Others wear plain red.  The woman who was sweeping up the trash is a local ARENA leader.  She leaves before the first piñata swings in the breeze. 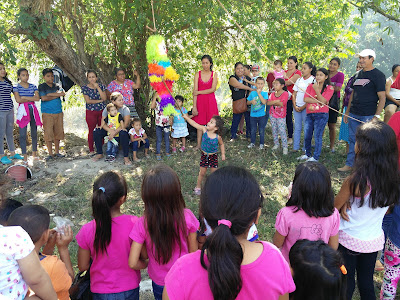 A community like this one cannot afford to hold an event with games and toys and raffles without the support from outside organizations.  The Lutheran Church in this town has always supported community events, since the church facilitated the establishment of the community in the first place.  The political parties are eager, especially before elections, to add their sponsorship too.  This creates an uncomfortable mix of hoped-for unity, some actual unity, and an appearance of the church aligning with one political perspective.  The Day of the Magi Kings celebration was fun for the kids.  It was fun for families.  It did bring people together who have not been with one another for long stretches of time.  It surely also propagated some feelings of deception and division. 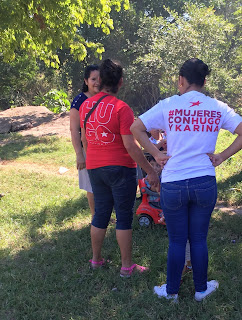 Political division is not unique to this community, nor to El Salvador.  In my own neighborhood in the US, my church, which is not a church with many economic resources, hosts a block event and invites sponsors.  Political candidates have come.  We have hosted candidate forums.  It is often the case that one political entity is represented and another is not.  It does not mean that our church is partisan, but is a reflection that the church and the Gospel lived out in community are in part political and have political implications.  Helping to establish a community of refugees following the civil war in El Salvador was a Gospel-act, a humanitarian act, and also a political act.

The magi followed a star as curious astrologers who seemed to have some knowledge of scripture.  They met with the king - the political leader of the land they entered on their quest, and they met the King of Kings.  The revelation or epiphany that occurred for them during that encounter with Jesus transformed them, and they knelt down to worship the holy child.  A dream led them to disobey the orders of the leader of the land, to withhold information from him, and to sneak back to their homelands.  When the king of the land is afraid of losing power, he murders children, forcing the King of Kings and his earthly parents have to flee and seek asylum in a foreign land.

The twelfth day of Christmas with its story of mysterious astrologers who have become known as Magi Kings, bearing gifts and witnessing a revelation opens up a season in the church year which is simply called, Epiphany.  After the processions with crowns, the striking of piñatas and the sharing of gifts, we will continue to ask:  What is God revealing to us?