Look up there.  Do you see where it is brown? That used to be forest.  Coffee trees and forest.  As the farms below were taken for [sugar] cane, the farmers needed to plant their corn further up the mountain.  As the water is depleted in the valley, the whole zone is drier.  Trees die.  Trees are cut down.  The forest disappears.  If we don't take care of the aquifers, if we don't take care of the forests, there will be disasters.

At 11:30 PM on Thursday, October 30th, families living near a wadi named Terraplén in the municipality of Nejapa were awakened by a thundering sound and shaking like an earthquake.  A landslide of rock, mud and vegetation was pushed down the gully by a great force of water - the result of torrential rains over the San Salvador volcano.  The slide left a path of destruction about 4 km in length, rushing over homes and families as they slept, and eventually making its way to the highway.  It is reported that 10 people have died, and 7 people were rescued after being buried in the mud.  60 families lost everything.

The city of Nejapa sits just north of the base of the San Salvador volcano, close to Apopa.  The municipality is home to Fe y Esperanza, a congregation of Salvadoran Lutheran Church.  Pastor Abelina wrote us a note on Saturday to let us know that the landslide caused damages close to the church communities.  She said the families have such mixed feelings of gratitude that their community was spared, but grief for their near neighbors.  Salvadoran Lutheran Church youth have already organized a collection campaign to help the impacted families with basic needs.

Over the years, Fe y Esperanza and Nejapa have been at the heart of the Mission of Healing in El Salvador.  The strong working relationship which we now have with the Salvadoran public health clinic system is in large part due to the time we have spent learning from Dr. Chiquillo and her team at the Unidad de Salud in Nejapa and their dedication in working side by side with us.  The families impacted by this disaster were surely known and cared for by this dedicated team.

In one of Friday's televised news reports, a man who had lost his mother-in-law and child in the mud slide spoke about living near the quebrada (wadi or ravine).  "Families have lived here for years," he said.

I heard that same phrase from Dr. Chiquillo a while back, as we walked along a dry ravine near the San Antonio River which runs near Nejapa.  The doctor told us we could only walk that path if it were not raining.  We paused at each home to check on pregnant women, to talk with elders, and to give vaccines.  The ground was muddy.  One grandmother told us the water had recently come up into her home, just inside the door so only her floor got wet.  Dr. Chiquillo said, "These families have lived here for years.  People live in risky locations when they have no where else to go.  Generally, the poorest families live in the riskiest locations.  That's why we walk here."

On Friday, less than 24 hours after the landslide, Pastor Santiago gave an interview on a local streaming network.  Listen to a bit of the interview.  Even if you cannot understand Spanish, you can sense the frustration which permeates Pastor Santiago's pleas for those in government to pay attention to science and to enforce the environmental laws which exist to mitigate the risks of future catastrophic events.  Pastor Santiago recalls previous mudslides which impacted Nejapa and Mejicanos.  He shares dire predictions for the impact of mudslides on the south and southeast sides of the volcano which would impact areas of high population density in Santa Tecla, Ciudad Merliot and San Salvador.

Balancing the protection of the natural environment with business development and residential sustainability in a small, densely populated country which is prone to all types of natural disasters is the most challenging of challenges. As I was looking through some photos of our walks with the Unidad de Salud in Nejapa, I came across one photo which illustrates well the specific challenges in the Nejapa area. 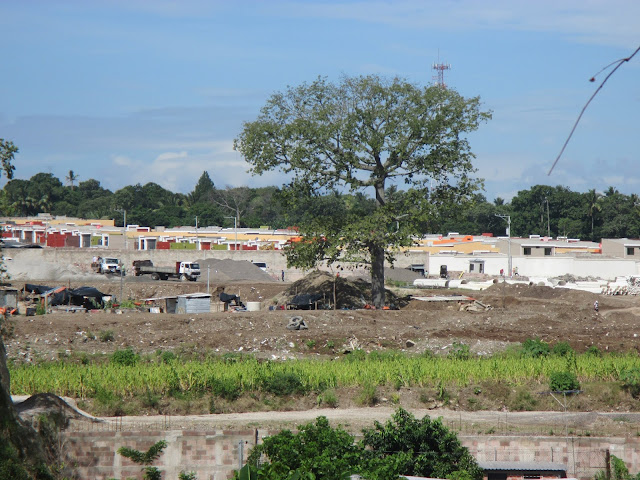 I took this photo from the back yard of a humble home, one in a line of humble homes perched along a dirt path on the edge of a hill near the San Salvador volcano.  Because Nejapa has a good source for ground water, several very large factories have been built within the municipality.  The construction of commercial centers and truck depots followed.  This photo shows the completion of a housing development which was built on land that was previously farmed.

This type of large-scale development changes the topography of the land and replaces trees and vegetation with pavement, concrete buildings and barrier walls.  In the past, rain which fell on the volcano ran down predictable pathways into ravines and rivers and was absorbed into the aquifer in the valley below.  Where is the water going to go as it comes into the portion of the valley shown in this photograph?  What happens to the homes which have been isolated by barricades of soil and concrete walls?  What happens to the homes below where I am standing and to the dirt hill on which I am standing as water rushes up against the concrete wall below?

Bishop Gómez sent out a letter to the international partnerships on Friday.  He has called on us to accompany the church in prayer and concern for those impacted by the mudslide in Nejapa.  As people of faith we will do this, and we believe prayer has positive impact in our world.

Disasters happen.  As Pastor Santiago likes to say, storms were created by God to rain, just as volcanoes were created to erupt and the earth was created to tremble.  As part of that creation, we have been called to be caretakers. If we do not respect creation, use the intelligence which God gave us to prevent disasters and prepare for that which cannot be prevented, we are not fulfilling our calling to be good caretakers.

As we accompany the church in prayer, let us also accompany the church by being knowledgeable.  So often our first response to something like this mud slide is "how can we help?"  That is a very valid and genuine question, and the example set by the Salvadoran youth who are reaching out in concrete ways to help is a good one.  But just as importantly, in the wake of a disaster like this, we can ask "what should we learn?"  If we are connected with communities surrounding the San Salvador volcano, let's learn about the eco-systems there; let's learn about threats to the environment and about sustainable development efforts in the region; let's get ourselves ready to accompany the church in its strong advocacy work to prevent and mitigate the impacts of disasters on communities which are the most vulnerable.