Let's Go for a Walk

We are fortunate. We can walk to work, but we don't have to. We have time to walk leisurely or as exercise. We live near places where it is safe to walk. We do not need to walk to find and carry water. We have shoes.

Walking in a place lets you hear the sounds, smell the smells, notice small things and feel the vibes.

Have I ever felt creepy vibes and needed to pick up my pace?  Well, sure, but that doesn't only happen in El Salvador. As is true anywhere in the world, if you are a stranger exploring an unfamiliar route, you procede with wisdom and advice from local friends.

On this fine Saturday morning, let's go for a walk. 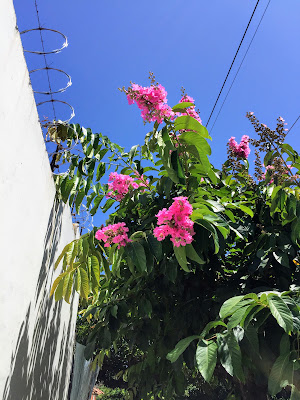 "Don't worry, I'll catch up."  I say that a lot.  Why? Because, sometimes a pink flower against the blue sombrero sky of El Salvador catches my eye. And razor wire. And power lines. You can learn a lot about El Salvador from one random photo. We walk along many walls.  Fear hides behind walls alongside the wisdom in building them.

Our destination today is a little park, without walls, on a nearby corner.  It was rehabilitated prior to the last local elections by the incumbent candidate for mayor of Antiguo Cuscatlán, and is named Parque Alejandría. Before the improvements were made, it was sort of an empty corner with a path looking down into a deep (really deep) ravine.  It gathered trash.

This little corner park is actually much larger than it appears from the street. Once inside, we can see the improved walkways, native plantings, picnic areas, play equipment for children, and shrubberies sculpted into animal shapes. 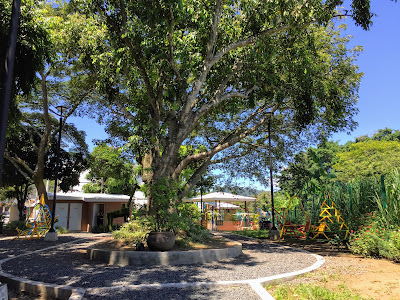 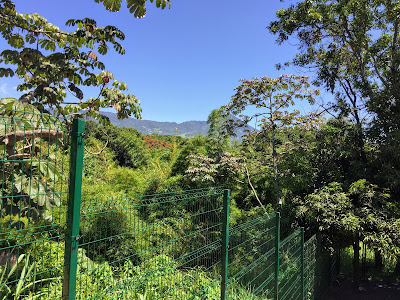 With just a little walk down a steep pathway, we can see that the view of the San Salvador volcano is amazing! The path suddenly ends (more about that later), so let's turn around and investigate more of the park. 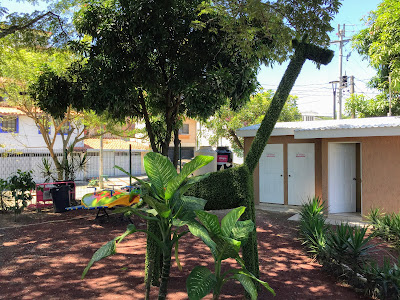 Of course we can chat with the security guy, check out the nice restrooms, and see some more fun things for kids.  Interestingly, we are the only ones here.  On our way out, let's check out the signs. This one lists the rules for the park.

Let's head back out onto the sidewalk and continue our walk downhill. Remember that path inside the park that suddenly came to an end? Well, maybe someday it will connect up with the rest of the park.  The older, more established part of the park is accessible through a gate a little ways downhill from the corner park.  Let's go in. 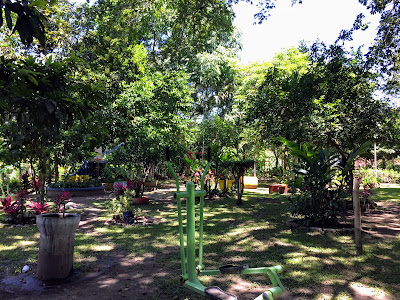 There are a few more people here - a guy cooling off in the water and a woman playing with her dog.  Let's check out the exercise equipment. Hey, we could get a pretty good workout here!

As we walk along the pathways, we notice these guys.  Who do you think they are?  My guess:  Don Quixote, Emperor Palpatine and Sir Gawain.  Let's research this after we get home. 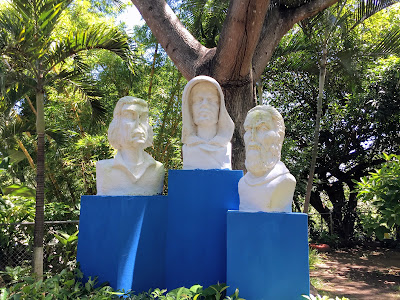 We can grab one more photo before we head out the gate and trek uphill. 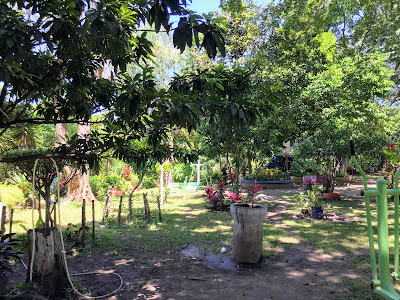 Don't worry, I will catch up, I just want to remember these trees! The smell of eucalyptus is enchanting. 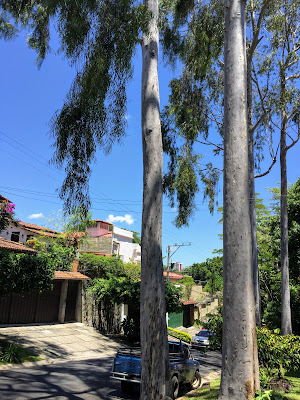 I know it's getting close to lunch time, but this flower is just so weird and beautiful. 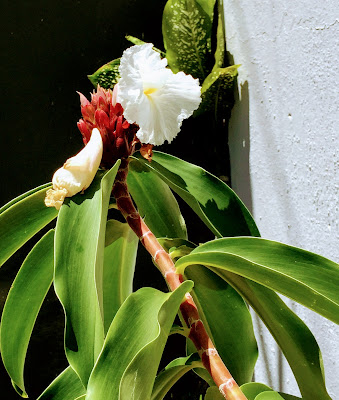 OK, I promise, this is the last photo stop.  Volcano, power lines obstructing the view, and trash NOT in the community trash bin.  Yup, that seems about right. 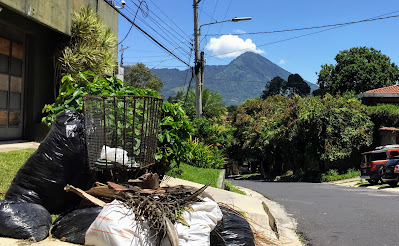 So now that we are home from our walk, we can do a little research about the three statues in the park.  It turns out that these three busts were originally located in the central plaza in downtown Antiguo Cuscatlán, and when that space was remodeled, the statues were moved to Alexandria Park.  The three men are:  Galileo, Copernicus and Einstein.

Thanks to a research document written by Mayra Alexandra Chica Argueta, Lidia Carolina López Cruz, and Fidel Moisés Santamaría Benavides from the University of El Salvador in San Salvador, I learned a little bit more about the history of the park.  Back when much of the land surrounding the center of Antiguo Cuscatlán consisted of coffee forest, the workers who came to pick the coffee used the space now occupied by the park as their camp. They hung their hammocks from the trees and rested there each night during the harvest season. Later, as the city grew and developed, this area became a wasteland and indeed was a place where people dumped their garbage.  Houseless people continued to rest here during the night.

The main park was constructed in the 1990's, and with the newly completed section on the corner, the park occupies about 20% of the total plot of land which was given to the city. While people are no longer allowed to hang their hammocks and sleep at the edge of this ravine, the addition of public restrooms, a source for water, and a safe place to rest and exercise during the day seem to be an honorable use of this space.