The Legend of the Flirty Parrot

October 10, 2021
We walked toward the edge of town. "What's the story about that old church?" I asked. The building looked nearly abandoned.
"That is the Iglesia Catolica El Calvario. They are working on the church, I think, but they still meet. This neighborhood is called El Calvario. When we walk to the edge of town, we say we are going to El Calvario . It's an expression we use because we say at the edge of every town, it is called El Calvario.  'We will meet you at Calvary' means we will meet you at the edge of town."
There is a story from this neighborhood of Tonacatepeque, El Calvario. Like many of the legends from Tonaca, this one is meant to cause the listeners to think about their behavior. Thanks to Sonia and the women's group in Tonaca as well as author José María Melgar Callejas for this story. 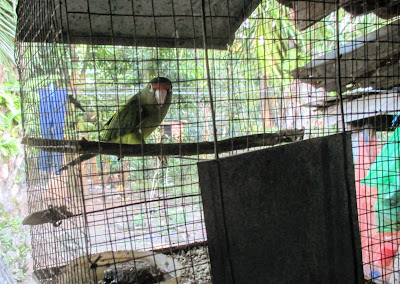 The Legend of the Flirty Parrot
In the outer corridor of a house in El Calvario, there was a bird cage, and inside the cage, there was a guest - a parrot which had been brought from a neighboring country where the forest is lush and the birds live freely. This parrot found himself caged by his owners, who had kept him for various years as their favorite pet.  During this time, the parrot had learned to repeat a number of words, much to the delight of the guests who visited the house.
The parrot would repeat, over and over:  "good morning, sir priest"; "good afternoon, sir priest"; and also phrases such as "my pretty love"; "I love you"; "cute old lady"; "give me a kiss"; "you are my favorite"; "what hair" and other more explicit expressions of love that the parrot had heard. The birdcage was hidden from view but was located near enough to the street so the parrot could hear everything which was said outside.
On a day like any other, there was a funeral for the town's priest.  The priest was very much appreciated for his work because had tended the people well, among them many distinguished leaders of the community.  The funeral walk from the church to the cemetery passed by the house where the parrot and his owners lived.  As the parrot sensed the presence of the procession, he repeated the collection of phrases he knew.  Those accompanying the funeral were surprised and disturbed by the disrespect shown by the owners of the house, who were speaking such disrespectful phrases as the priest was carried for burial.
The day following the burial, some of the townspeople came to talk to the owners of the house.  The owners offered an explanation. When the parrot heard the voices in the house, the parrot said, "What lovely hair, sir priest!"
The visitors left, saying among themselves, "You have to see to believe, and you have to hear to discover."
A little more about the church...
El Calvario church was built of wood, perhaps completed in 1893. On January 12-13 of each year, the members and community of El Calvario hold a festival in honor of "Jesus of the Rescue" in remembrance of Jesus' great sacrifice to save the people of God. In the 1930's and '40's some small reconstruction projects were done, but basically the church remained in tact for more than 100 years. The 1986 earthquake caused major damage and was followed by storms (including Hurricane Mitch) which caused severe water damage. The 2001 earthquakes made the roof structure unsafe. Major repairs were not undertaken until 2011, which is why for my early years in El Salvador the building appeared to be abandoned.  The neighborhood of El Calvario is very proud of their efforts to raise funds and restore the church by their own efforts. 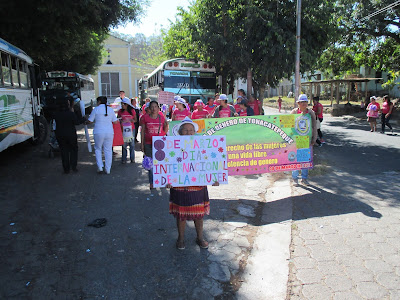 In March 2018, I participated with a group of women from Tonaca in a big parade and event in honor of Women's Month.  We gathered in the street and a little park area in front of El Calvario church and had a good hour and a half to chat, share stories and eat pupusas.  In the photo, you can see the neighborhood, the neighbors and the pale yellow facade of El Calvario Church.
Culture History Legends October Tonacatepeque Women