After coffee and lunch and a lovely walk through the gardens above Lake Coatepeque, we set out for our next vacation destination: the Tazumal archeological site.

Just west of the city of Santa Ana, the small city of Chalchuapa is currently home to about 75,000 people and has the distinction of having the longest period of continuous human habitation in El Salvador. The name, Chalchuapa, means "River of Jade" in the Nahuat language. GPS is helpful for finding the park entrance, or follow the signs and ask for help when you miss the turn.  Parking is on the street, and a local entrepreneur will gladly keep your vehicle safe for you, and be sure to give a nice tip.

The park is open on Tuesdays through Sundays from 9 am to 4 pm. The entrance fee is $5 for foreigners. If you have time or are a frequent visitor in El Salvador, a visit to the Guzman National Museum of Anthropology prior to do some background study prior to visiting one or more of the archeological excavation sites is helpful.

We started our Tazumal tour by walking through the museum and reading about artifacts unearthed during excavations of the pyramids. If you are into incense burners from the classical period, you will find them here (which makes sense since the excavations on the site of sacred worship spots and burial chambers). It actually is quite amazing to see painted clay vessels from 2000 years ago and to wonder about the people who made them and used them.

Just outside of the museum stands a large, carved stone which is protected by a little roof. Had I been leading a delegation, I would have reviewed my notes on Mayan, Toltec and Pipil cultures in western El Salvador, because (true confessions) the only deity I can ever really remember the details about is Xipe Totec. (Xipe Totec is the fertility/good harvest god which was re-dressed each year with fresh human skin from some unlucky soul, and usually English labels on replica statues of him translate his name as "our lord the flayed one" which is a rather memorable name, I think.) Anyway, feeling less than qualified to give an excellent tour of Tazumal to our friends, I encouraged my husband to walk over to the guys sitting under the trees and find us a guide.

This is how we met Carlos. Carlos is from Chalchuapa. He is knowledgeable, professional and passionate. Carlos is what made this visit to Tazumal a real treat. I regret not taking copious notes of the stories Carlos shared, but even without notes, his enthusiasm and love for this place helped much of what he said sink in. Here are a few of the things I remember...

The first people to move into this region were the Olmec (between 1200 and 1000 BCE). Ethnically, these are the people who were connected to those who migrated from Asia over the land bridge over what is now the Bering Strait. The Olmec culture is often described as "the mother" of the native people in the Americas. Evidence of the Olmec presence in Chalchuapa can be seen on the big, carved stone - yes, the stone which caught our attention outside of the museum. We had not noted (or remembered) that it has carvings on all four sides.  Three of the figures are wearing helmets and have facial characteristics like the giant Olmec head statues found in Mexico.  (Carlos was great at whipping out his cell phone to show us images from other archeological sites to help us understand historic connections.) These three human images carved into the Tazumal stone appear to be rulers.  The fourth figure is physically different from the others and carries a container, which likely indicates he was a messenger.  Perhaps the stone was carved to commemorate a meeting of great leaders. There are people today in El Salvador who still carry the DNA and the features of these ancient ancestors.

The visible pyramids stand on top of 11 or 12 older pyramid structures. The eruption of the Ilopango volcano in 431 CE left an identifiable layer of ash, which helps scientists date different layers. The Maya believed that at the end of the long calendar cycle, the universe was destroyed and then rebuilt. Periodically, their temples were leveled and new ones were built on top of the old sites. The sacred ground of the Tazumal pyramids holds burial chambers for the upper class (rulers) and ceremonial temples on top where the priests would make sacrifices to the gods. The cement restoration was added to protect excavated parts of the pyramids. The original building materials consist of clay bricks which erode under the elements.

Carlos was pretty impressed by the water management system which has channeled water away from the tombs and pyramids for 2000 years, and still works. The mortar used by those who built the stone staircases is so strong that scientists cannot really crack it, and the recipe for it remains a secret which is buried with the ancients. People of indigenous heritage and culture still come to this sacred place on a regular basis to conduct the candle ceremony and feel the energy in this place.  Carlos said he didn't really believe in the energy stuff until one time he was guiding a person who wanted to pause meditate.  After the man completed his meditation, Carlos said he felt an energy come from the man that was powerful. Truthfully, if you are the kind of person that senses energy in places, you will feel something here.

In 2011, my last visit to Tazumal, we were accompanied by children and mothers from our sister church community. It might be interesting to see what the kids, who are now grown, remember from their walk through ancient history.

For those who like maps, there is an image in the museum, which is named for Stanley Boggs, the archeologist responsible for excavating much of what can be seen at Tazumal. Boggs supervised excavation at many archeological sites in El Salvador. From the map you can see that in 1944, the area surrounding the pyramid site is labeled as different fincas (farms). The name Tazumal was the name of the finca at the time of its excavation. The land is now owned by the government. 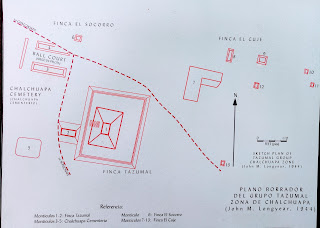 Additional photos and information can be found at the Tazumal Archeological Site website.

Next stop on our vacation tour: Ataco.

In case you missed it, the link at the beginning of this story will take you to the first episode of our recent Vacation in El Salvador:  Coffee Stop Above Lake Coatepeque.