A Place for Them

March 17, 2014
Before the sermon, the children are invited to head off to Sunday School (escuela biblica).  They file out of the sanctuary through a door in the chancel area.  Their teachers follow them.  Their room is tiny - a storage closet, really - about 5 feet by 8 feet.  Two tables and a bunch of little chairs hold about 12-15 children and 2 young adult teachers.  Soon the strains of their singing are competing with the pastor's preaching, and a mom closes the metal door with little bang.  Even though the door is closed, the worshipers can hear the children acting out the Bible Story, giggling while coloring, and eventually singing the "go-to-song when the sermon is running long."  That song is catchy, and sticks in your head even while you are concentrating on the sermon...era un crocodilo, un orangutan...

The congregation has been working for a long time to find a Sunday School plan that works.  Back in the old days, when the church was a little tin and bamboo structure, Sunday School was held on Sunday morning.  The altar was covered with a giant board and converted to a work table.  Thirty to sixty kids would scamper up the hill to listen, dramatize, color, sing and pray.  No one worried about the kids finding their way to and from the church.  More or less, the community was peaceful. 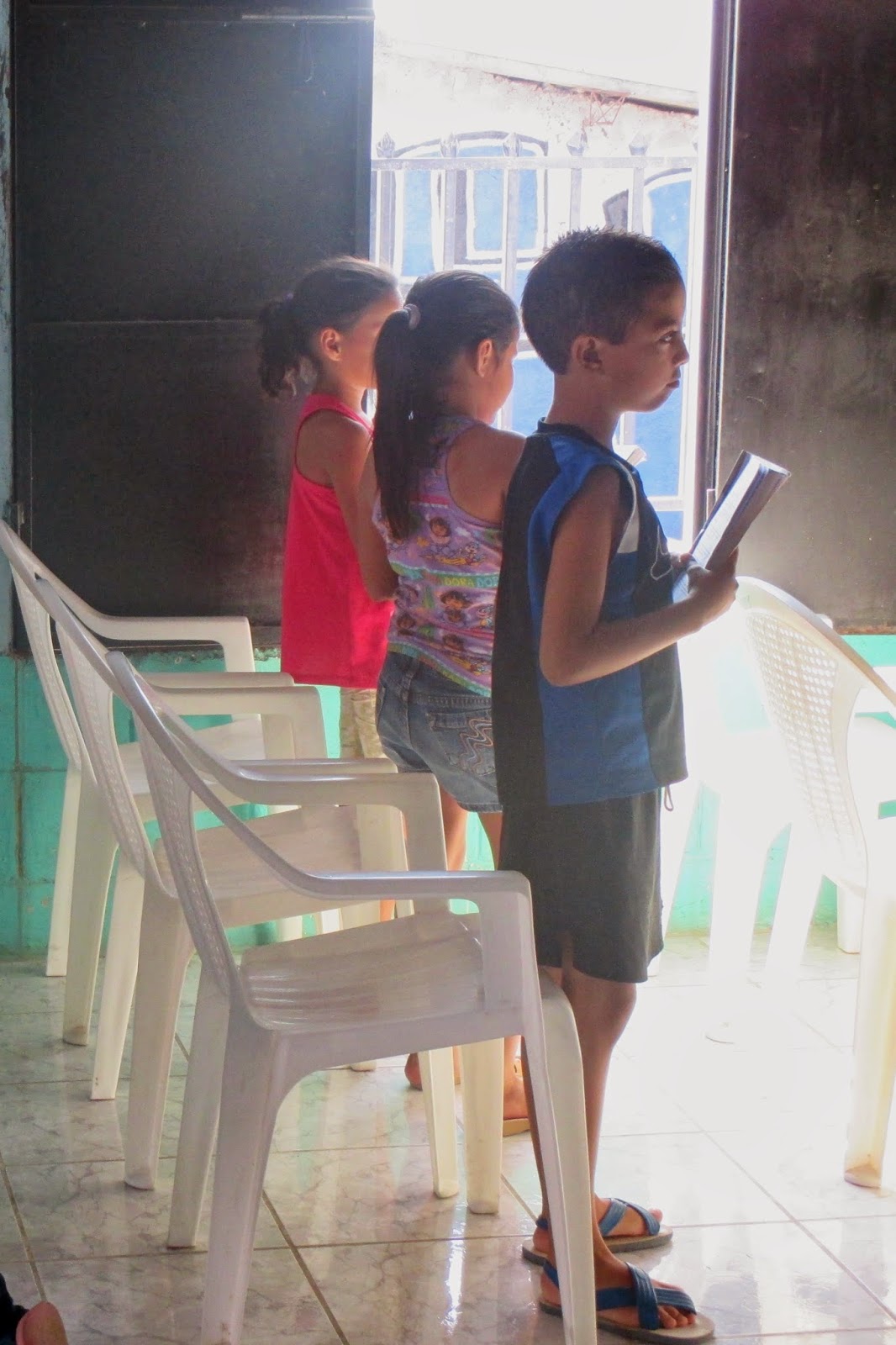 Then the gangs infiltrated the community.  Little by little the Sunday School grew smaller, eventually consisting of mostly the teachers' siblings and cousins, the children who live close to the church and a few other children of dedicated moms.  Worship was moved to early on Sunday morning (better for those who work on Sundays), and Sunday School was simultaneously held in the teachers' home near the church.  After a young father was pulled from the home and murdered, no parents really wanted their children to attend Sunday School there.

"Sunday School" then became "Bible School" and was held in the church on Saturday mornings.  The young teachers were accompanied by the pastor or other adult leaders in the church. Eventually the situation grew more dangerous, and a few times teen gang members came into the class to color. Other times they milled around outside.  Sometimes the soldiers were there instead. Parents became uncomfortable, and the Bible School closed.

The desire to pass the faith on to the next generation is strong, and new energy now surrounds the desire to create an education time and space for the congregation's children.  The goal is to have Sunday School class overlap worship so that parents and children can be together for part of the time.  For now, the few children in the little space are happy, learning, and singing, close to their parents.  The dream is to enclose an area next to the church to create a bigger space.  Maybe some day, that dream will come true.
Education Faith Kids Worship