March 13, 2014
As the Supreme Election Tribunal announced the victory for Salvador Sánchez Cerén of the FMLN, the ARENA party continues to argue that there was election fraud.  During our observation time in three different locations, we did not observe fraud.  There were a few voters turned away for not having the proper identity document.  There were a few disputes over marked ballots, but the voting table personnel came to reasonable conclusions.  As the final outcome continues to unfold, I will continue to share the photos and stories from our observation experience...

As voting began at our first observation site, the flow of voters was slow and steady.  "I think we will have fewer voters than in the first round."  We heard this phrase frequently.  It was very fun for us to begin our day in a place where friends from our sister church community were working, watching and voting.  The young people were especially proud when they tracked us down to say, "I voted!"

One of our friends was a table president.  Before she opened the box to unpack the ballots and all the equipment for the day, she led her team in a prayer, asking  God to watch over the whole process and that it be peaceful and honest.  In another room, the table team and vigilantes talked with each other about setting aside their partisan differences for the day and working as a team.  They made a pact with each other to work together for the good of the whole.  It was really a beautiful moment.  There were a large number of police officers at the site, which made sense due to the heavy level of gang activity which occurs there.  We saw one guy get frisked, and people entered by one gate and exited by another.  The officers were overall smiling and friendly, and did a good job helping the older people step up through the gate to enter. We did not spend our whole day at this site, so we don't know if the prayers and agreements rained peace and tranquility over the entire process, but while we were there, we enjoyed the experience and it seemed like the voters and workers did too.

At 9 am we left our first site, and passed by another site so one of our observer team members could vote.  Then we headed up to a voting location which was near the Cuscatlan stadium.  During the drive, I took a few photos... 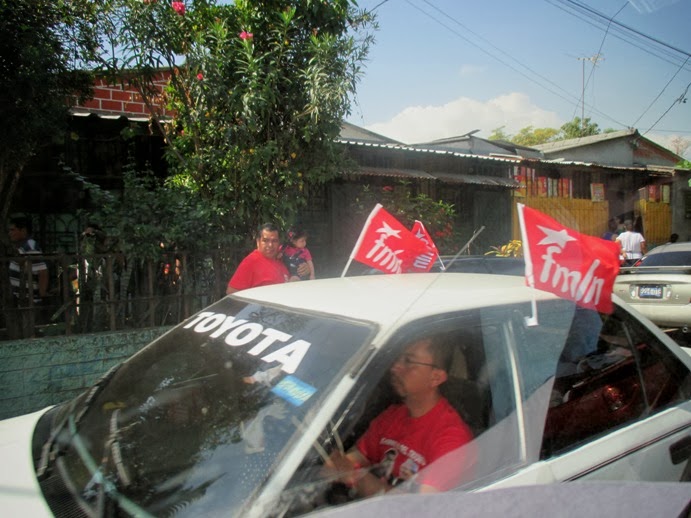 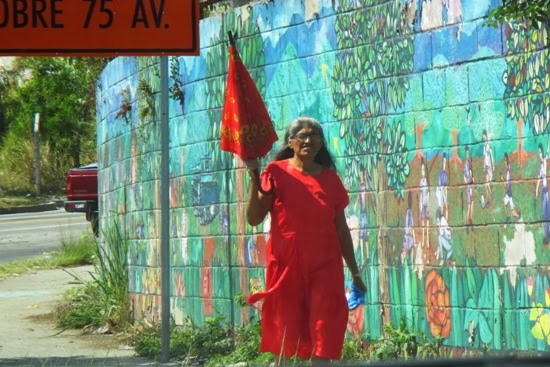 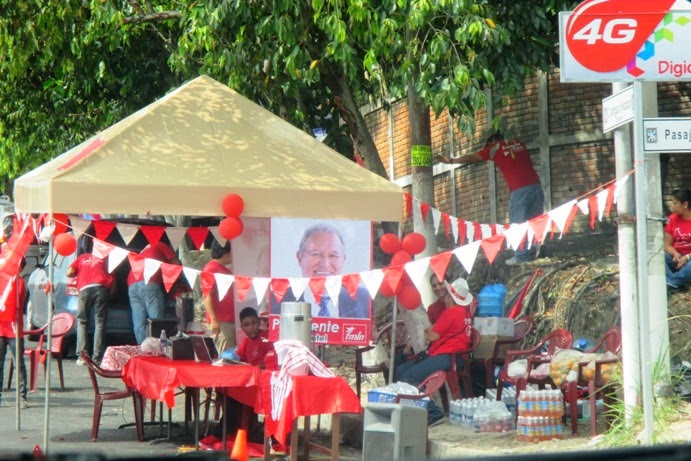 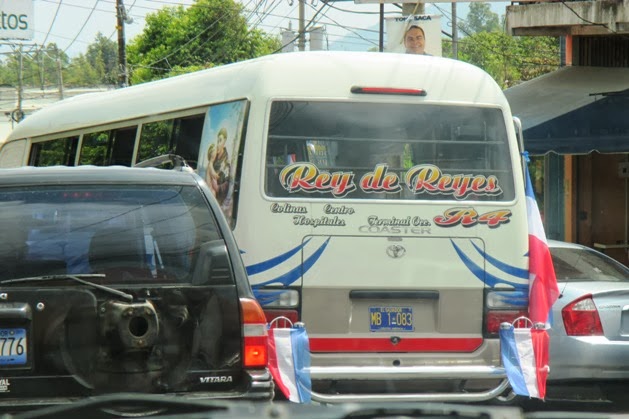 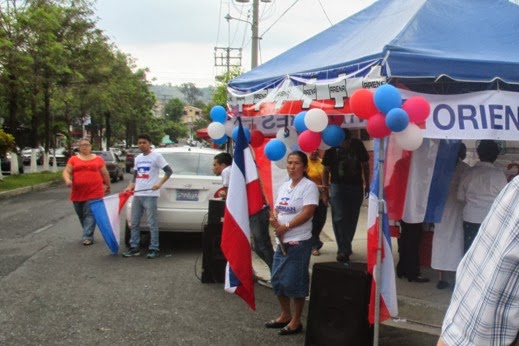 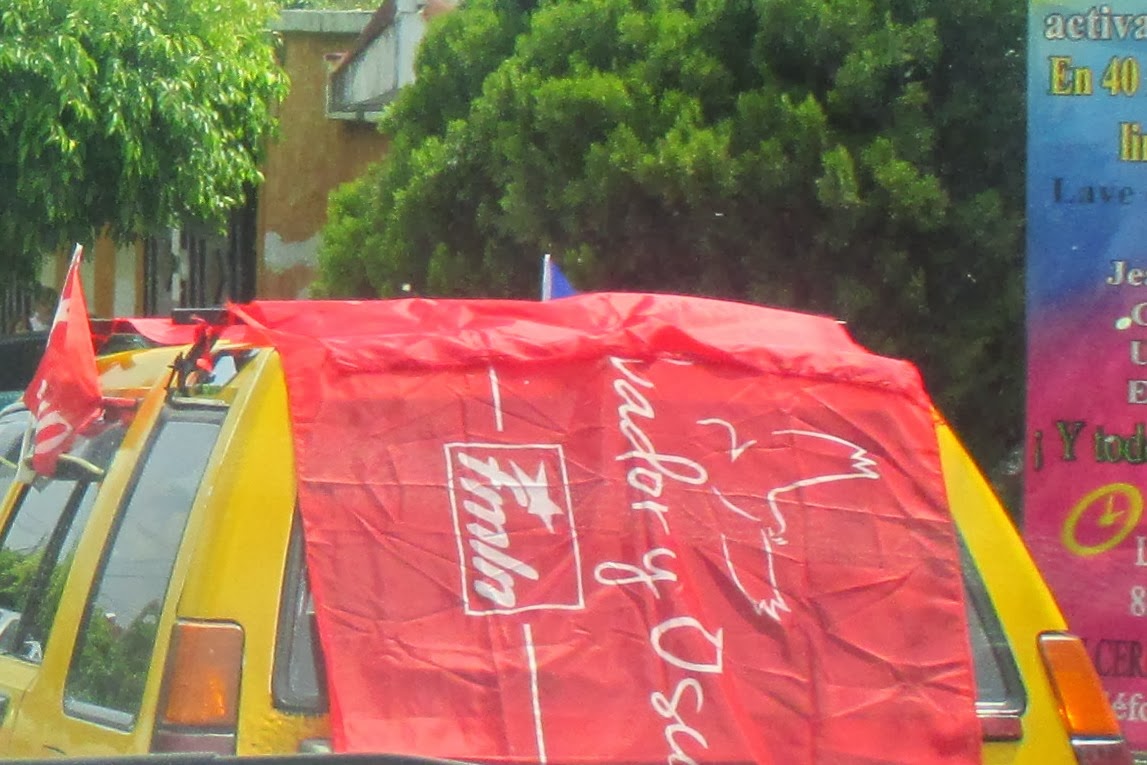 One thing we did notice throughout our travels on election day, was that the ARENA party had a huge busing operation to help people get to the polls.  Someone told us that the owner of a bus company had made a last minute arrangement with ARENA to provide transportation.  At one point we saw a line of more than 20 buses with ARENA flags.  The FMLN also had their operations for getting out the vote, though they tended to be more in the line of trucks crammed with people in the back waving flags, pick-up trucks and taxis.

The voting site up past the stadium was small but crowded.  The voting tables were set up under small canopy tents and there were a lot of people milling around, taking photos and gathering with family.  The atmosphere was very different from the earlier site.  There were some pretty amazing political party outfits which I wish I would have captured in photos - think super-model tight clothes with glitter, spikey shoes and shiny cowboy hats.  It was a little more difficult to observe in this location because not all of the vigilantes were wearing vests, the space was very tight and the table teams worked very quickly.  It is different when the workers and voters are not necessarily neighbors.  It seemed like the vigilantes were keeping a close eye on the process and we did not observe anything of great concern. 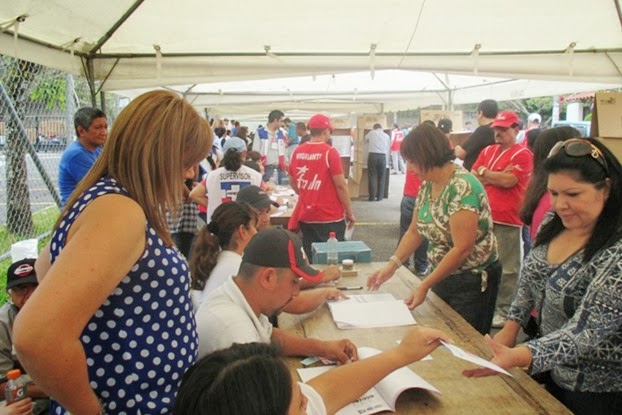 We stayed at the urban site until lunch, and then grabbed some Pollo Campero before heading south to our last site of the day.
Current Events