Chik scares people.  "Our bodies have no memory of this disease, so we cannot fight it."  It runs through family members in rapid succession.  Data indicates that the majority of victims are teens and young adults.  Parents are frightened to see their energetic youth suddenly stricken by fever, severe headache, joint pain and a red, itchy rash.  For some, the joint pain is so severe that victims cannot walk or stand, and pain seems to linger in the wrists after the other symptoms have passed.  For some, rehydration with IV fluids is needed.

Clinics are inundated with cases of Chik.  Doctors are seeing four times the number of patients usually seen in a day.  Pregnant women, people with chronic illnesses and high-risk patients are hospitalized.  Treatment consists of taking acetaminophen for the pain and drinking lots and lots of fluids, especially Suero.  For some, complications occur when patients take ibuprofen or other pain reliever and damage is done to the patents' kidneys.  For some, joint pain can be permanent.  For most, the disease lasts a miserable seven days, and then the patient is fully recovered.

Chik is spread by the same type of mosquito (called zancudo) which spreads Dengue.  Zancudos are day-biters.  An infected person receives a bite; the zancudo bites another person and shares the virus with that person.   While Chik is scary, Dengue can be deadly.  The ramped-up efforts by health departments, clinics and mayors' offices to fight Chik are efforts which should be (and often are) used to fight Dengue. 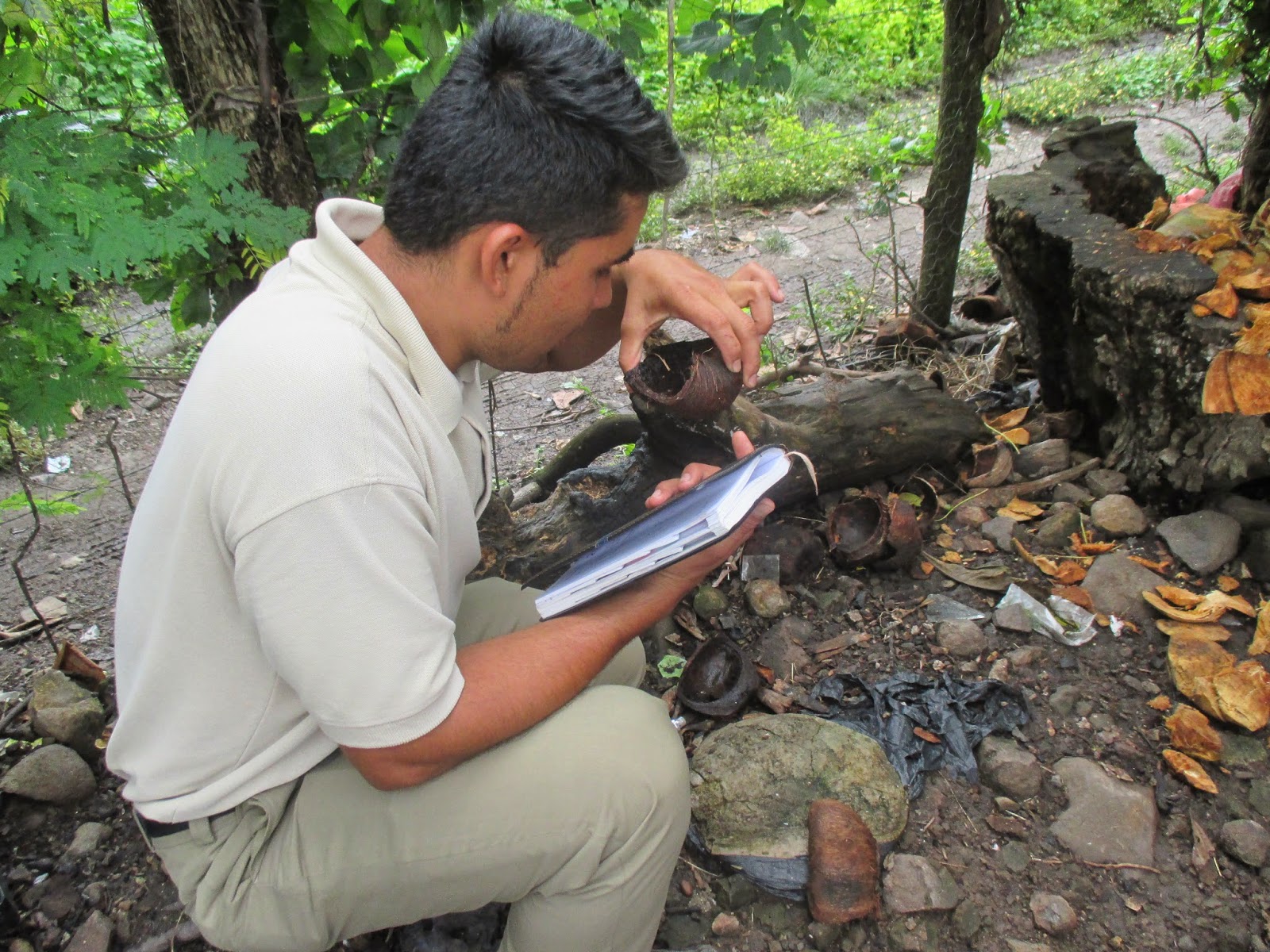 The best defense is to eliminate the habitat for zancudo larvae or to eliminate the larvae once they hatch.  Larvae develop in clean water, like the water kept in pilas (the big cement sinks used to store wash water) and barrels for drinking.  Barrels must be kept covered.  Pilas must be scrubbed periodically and outfitted with a little bag of premethrin or be a home for a couple of tilapia which eat the larvae.  Zancudos also like to lay eggs in places where rain water collects, which means every bottle, cup, plastic bag, plant container, or depression in a rock, must be searched for larvae.  In neighborhoods where there is no trash collection, this is an overwhelming task. 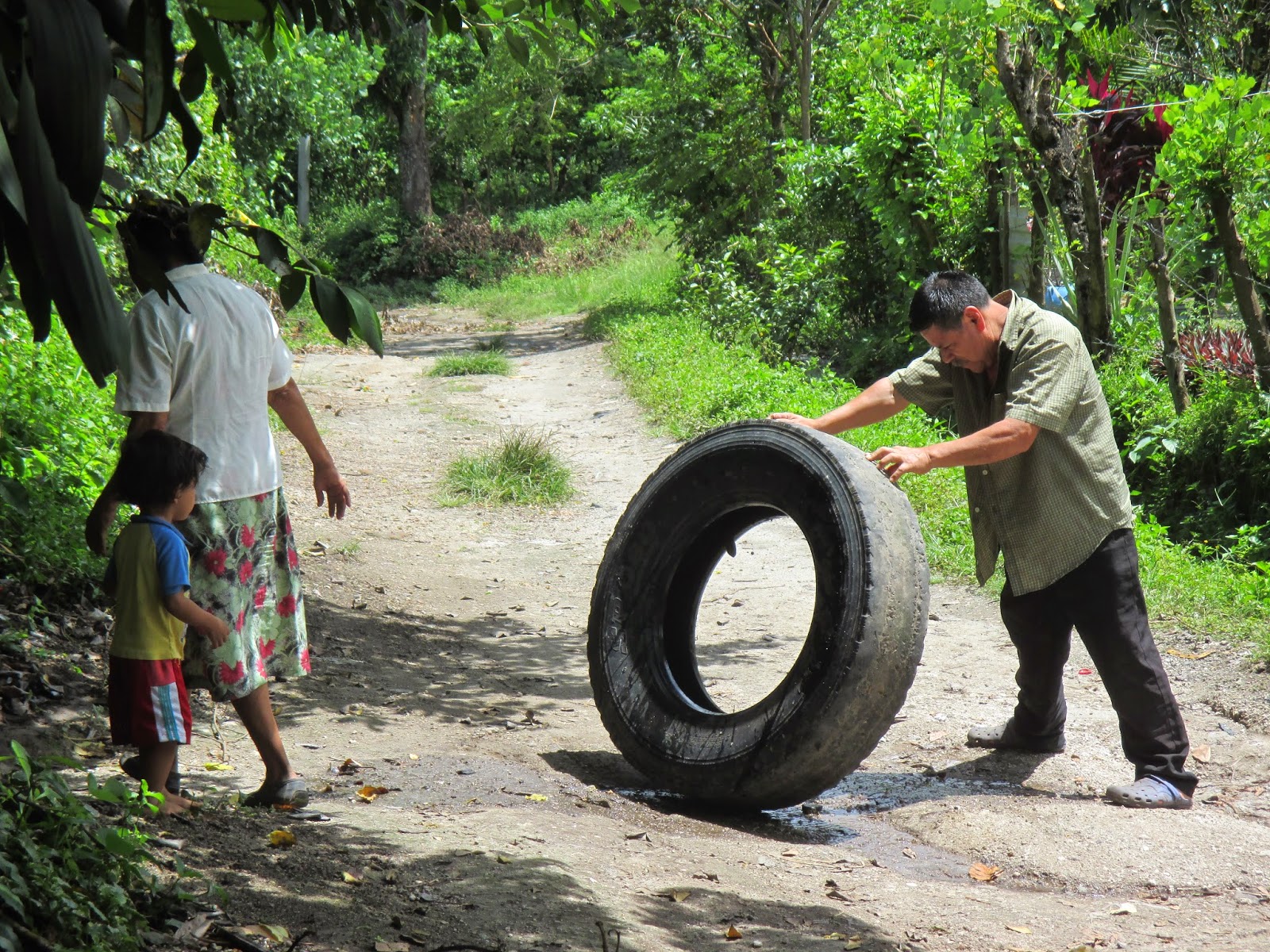 After walking all over El Salvador with health promoters on larvae-patrol, my friend and I became obsessed with looking for larvae.  When we visited homes we found ourselves gazing into the pilas, and meandering about the yard flipping cups and containers upside down.  Sometimes we would find a duck on the premises which made our search easier:  ducks eat zancudo larvae.  With this rainy October being especially wet, the task was never-ending.  Old tires are especially popular locations for larvae.  "Bury them and fill them with dirt," is the standard instruction.  At a little celebration which was held for us at an elementary school, we decided to give have a charla (educational talk) about larvae, and we took the kids out on patrol through the school yard.  Sure enough, we found some swimming around in a pool of water in a plant container which had no holes in the bottom.  The teacher was horrified!  The next day she planned to fill all the holes in the big pile of volcanic boulders with dirt so larvae would not hatch in the holes.  Every now and then we would find a yard with a duck.  Since ducks eat zancudo larvae, we did not have to check the cups, bowls or containers on the ground.

When larvae patrol is not successful, and pupa develop into zancudos, officials bring out La Bomba.  Fumigation is a last resort in the minds of health officials.  The chemicals are expensive, cause allergic reactions in many people and are dangerous for people with asthma.  Bomba sprayers usually wear gas masks.  Big cans of gasoline are stored at the health clinics for running the bombas.  The general public asks for fumigation - they like it because it is easier than hunting for larvae and it does kill the zancudos.  To us, the bombas seemed much more scary than Chik.

As news travels around the world about one frightening disease or another, Salvadorans are mindful that the challenges of poor infrastructure and many people living in small spaces make the population susceptible to infections which run wild.  This is the root reason behind the fear and furor surrounding Chik.

My friend and I want to hold up the amazing efforts of the ECOs and Health Promoters (government and church promoters) throughout El Salvador who are working every day to educate families and mitigate the risks to the health of the Salvadoran people.  We also think every family should have a duck and a couple of tilapia.