January 19, 2016
On January 6th, the Day of the Magi Kings, celebrations are held across Latin America.  In El Salvador, these celebrations primarily happen in the Roman Catholic Church.  In the Lutheran Church, the day of Epiphany is celebrated on the Sunday after January 6th. 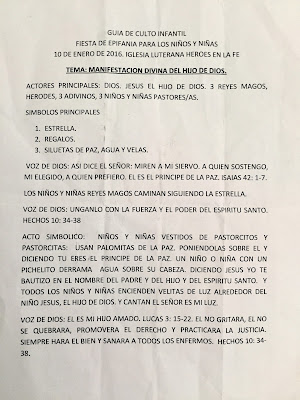 Pastor Santiago presented the plan for el domingo de los reyes magos (Magi Kings Sunday) to Sonia, Jocelyn and Evelyn on Friday.  He received a little scolding from Sonia because two days did not seem like enough time to get actors and costumes and everything organized for an Epiphany pageant, especially when a group of youth and adults from the US would be visiting.

If you read Spanish, you can read the plan in detail.  It calls for actors including God, Jesus, 3 Kings, Herod, and children as pastors.  Props include a star, gifts, water, candles and cut-outs of doves on sticks.  The general idea was for the child kings to follow the star, to look for the child Jesus, to present the gifts, and then, in the midst of a conversation about baptism, the child pastors would baptize the child Jesus.  At that point the doves would fly up and hover over Jesus.  Then all the children would light their little candles - in the same way that candles were lit at their own baptisms.

A bunch of little kids, holding lit candles, with cardboard doves on sticks seemed like a recipe for disaster.  Nevertheless, each team member took charge of an aspect of the plan.

Two days later...it was Sunday.  We arrived at the church to find little girls in fancy dresses.  Every girl and young lady received a "crown" made from white, fancy elastic with a little blue bow sewn to the front.  Clearly Sonia had initiated a bit of late-night sewing.  (And at this point, it is appropriate to give a shout out to the generous women of the sister churches in the US who donate their extra craft and sewing supplies to be used for events such as this!)  Children trickled in - all dressed up in their fancy attire.  A helper arrived with crowns, made from bulletin board border, and these were placed on the heads of men and boys alike. 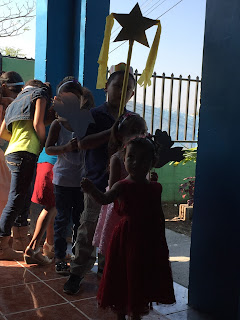 Soon it was time to sing, and all the little kings and queens with their crowns lined up at the door to follow the star.  The search for Jesus was accompanied by the Donkey Song, and the entourage arrived at the Christmas tree.  The gifts were presented and Pastor Santiago talked about Jesus' baptism.  Of course, in the biblical narrative we read that Jesus was an adult when he was baptized, so this was a symbolic baptism led by the guest pastor. He was given the precious baptism pitcher, a long-treasured gift from the community's sister church.  The children and the pastor baptized Jesus.  Then the doves fluttered up as the little kings and queens waved their sticks.  The star was placed upon the Christmas tree, and the doves landed in its branches.

The worship ended with each child receiving a gift bag with sweets, and of course, in their generosity, the children handed lollipops and chicle (gum) to their grown-up friends.  Youth and children paired up to paint white primer on the outside of the new Sunday School space.  All those little girls in fancy dresses, wearing their white crowns with little blue bows, grabbed brushes and painted with enthusiasm.  After washing up, the pizza bakery provided pizza for all.

The day did not go exactly as planned.  Yet it was a perfect day for the little kings and queens and all who visited.  Happy Epiphany!