January 14, 2016
"I talked to my mom and she is in the middle of something very difficult."

"Lisseth, she's our neighbor, her child died.  I think he was five years old.  And my mom said Lisseth was not in her right mind and wanted to sell her 2-month old baby to pay for the funeral for her son, but the community would not allow that to happen.  My mom is managing this by herself.  She's managing it," Kati said.

Kati was visiting the US with her pastor and a couple of other youth from the community.  I could see the stress of the situation on Kati's face.

A few weeks later, I was with Kati's mom in El Salvador.  "How's Lisseth?" I asked.

"She's coping. It is not easy.  But I need to tell you what happened.  It was very mysterious.  The little boy was not feeling too well, so he went for a check-up.  He has always had a heart problem and walked around with an apparatus in his heart.  He got a special little vest so that the lightning bolts would not affect the function of the apparatus.  I saw him running around outside after that and he seemed fine.  Then one day a little later, he didn't look too good.  It seemed like he was having trouble breathing.  So his mom took him to the doctor and they said he needed something fixed with the apparatus.  They put him under general anesthesia, and maybe that was a bad idea because of his breathing.  No one ever imagined that he would not wake up.  His mother expected him to wake up, and he never did. 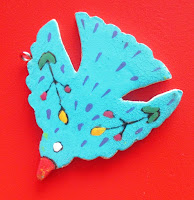 "I remembered that time when you were here and we had to bury Sylvia's baby, and we did it.  It gave me the capacity to take charge of this vigil. At the moment when we placed the little coffin on the altar, a dove flew inside the church and it perched up above the altar.  It was very mysterious.

I tell you, there was not a sad moment during the vigil.  The children sang.  All the children sang.  And they talked about their little friend and they never left him.  And up until the very moment of taking the body to be interred, the dove never moved from its place above the coffin.

It was very mysterious.  Some people think maybe that spot in the church is a place where doves like to sit, but no.  I tell you that it was something more than that."

The events occurred as written, but the names have been changed.