June 14, 2016
Balloons were going up as I arrived.  Three long tables were covered with striped cloths, and blue plastic resin chairs were set all around.  The welcome table had shiny blue ballon shaped like a baby carriage stating "It's a Boy" taped to a stick which also had a foam figure of a little boy taped to it, all stuck into a little basket with some yellow fru-fru.  The expectant mom arrived with party favors, and the hostesses got their game supplies together.

You might think it is a little funny that in El Salvador, a baby shower is called a "el baby shower" (just emphasize the SHOW-er over the ba-by).  The invitation for this shower went out by email to the mom's many church friends.  It was interesting to see the "reply all" responses that filled my inbox..."what a beautiful invitation" and "what a wonderful blessing."  Not a single person responded with a plan to attend or not to attend.

This is not the mom's first baby, and it seems pretty typical for family and friends to put together small baby showers for each new addition to the family.  It also seems pretty common to have women and men at these events, which are usually described as convivios (literally "living together" but in the sense of "let's all celebrate together as a community").

We sang a song as guests started to take their seats, and the new mom's mother arrived carrying a Super Selectos bag with some plastic bottles in it.  Wine.  Huh.  Middle of a Friday afternoon...why not?  I was a little skeptical of this home-brew hibiscus flower wine.  It's made by small cooperative connected to the Lutheran Church guest house, and my previous experience with it was a not-so-wonderful gulp of vinegar.  Fortunately the wine-makers seem to have perfected their technique, and the Baby Shower wine was pretty tasty.

Now that the wine was poured, it was time for games.  The first game was a baby word search.  Everyone was supposed to start at the same time so it was pretty funny to see pastors trying to cheat.  The top 3 winners each received a basket of candy. 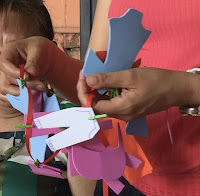 For the second game we were divided into 3 teams by tables.  Each group was given 2 sheets of fun foam and a couple of pair of scissors.  In the allotted time, the team had to cut out baby clothes shapes from the foam and clip them onto the clothesline (a piece of ribbon) with tiny clothespins.  At the end of the time, table 1 had more clothes than the other tables, so they won.  Table 3 shouted out, "That maquila (sweat shop) has a lot more workers, so that's why they won!"  Maybe this is not as funny in translation as it was in person, but everyone got a good laugh out of it and all the tables then got prizes.

For a treat, we were served ice cream (which they often call sorbete) or a different kind of ice cream called nieve (a Mexican style "ice cream" made with water and fresh fruits), with a "picnic" cookie (the cardboard wafer kind we all loved as kids).  In the meantime, a roll of toilet paper was passed around the table and each person broke off a chunk, estimated to be the size around the new mom's belly.  Her dad over-estimated her circumference by more than double, which was good cause for a lot of laughter!  As guests relaxed and as the mom opened gifts, a big bowl of candy was passed around the table.  If you are thinking that these refreshments had a common theme - you are right! Sugar on sugar on sugar. Oh, except for the wine.

The gifts were cute and mostly practical.  In El Salvador, Winnie the Pooh is a must-have on at least one nursery item for every newborn.  Different than in the US, babies in El Salvador are typically gifted with a tiny comforter trimmed with lace and a little pillow to match.  Most moms seem to use the pillow to block the baby from rolling off of a chair where the baby might be placed for a nap.  A hanging clothes organizer is also a must, usually very ruffly featuring Pooh or another cartoon character. 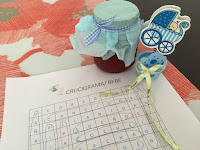 At the end of the party, each guest was given a little jar of home-made strawberry jelly (made by the new mom's sister) and a baby boy recuerdo (souvenir) with a little clothespin for clipping a picture on it...perhaps of the new baby.  As guests were leaving, all of the extra candy was given out, as well as a couple of extra bottles of wine.  One funny image that will be stuck in my head for a while is watching the new mom's mother pondering what to do with about an inch of wine in the bottom of one of the bottles.  She held it up, tipped her head, looked at it, shrugged, tipped the bottle up to her mouth and gulped it down.

The second baby shower of the week was a small family affair, and my husband and I were very honored to be invited as family.  The party was held in the garage space of a small home, and we arrived just as the sky decided to rumble and flash and dump down tremendous amounts of rain.  We held a 2-month old baby, visited with young people we have known since they were babies themselves, and shared lots and lots of hugs.  A few home-made decorations were taped onto the wall and a pink balloon made from marshmallows was placed in the middle of the table.  Family members arrived soaking wet with plastic bags carrying pupusas, plantains, beans, cream and juice.

Grandma and Grandpa, whose home was the site for the Baby Shower, arrived a little late.  They had been to the one-year anniversary vigil marking the death of a beloved sibling.  Grandma was super surprised to see the party - she is very forgetful and didn't remember there was going to be a convivio in her home.  She lives in the moment, and the joy on her face and the kisses she shared all around were precious.

The young couple is expecting their first baby - a little girl.  There were a few gifts shared after the meal - a little comforter and a pillow, a baby clothes organizer, a baby manicure set and some clothes.  A small gold box held a pair of tiny gold earrings.  Salvadoran baby girls have their ears pierced as infants.  Another gift bag held a tiny pair of red shoes and a small embroidered white cloth.  Traditionally, babies' belly buttons were covered because of a belief that babies "breathed" through their belly buttons and the covering was a way to keep out evil spirits.  Baby girls still often wear the white cloth tied around their tummies with the idea that it keeps their belly buttons from becoming "outies."  Pediatricians often gently remind new mothers that the best way to care for a new belly button is fresh air, but it is hard to go against the long-lived traditions of the grandmothers (which in my opinion often have merit in their mystery - though I am not sure about the white cloth). 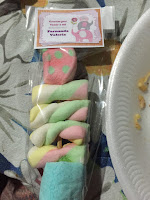 The expectant mother shared a little recuerdo with each of the guests - a marshmallow kabob (and the strawberry-shaped marshmallow was really delicious!).  The expectant dad is nervous.  He ate 3 kabobs.

Since my own daughter just had a little girl who is growing fast, I was able to share a few gently used gifts from her.  Everyone was very impressed with the muslin sleepy sack - a way to swaddle the baby during the first weeks without danger of blankets covering the baby's nose or mouth.  Safe sleep is not something Salvadorans talk about - whereas in the US, we are very focused on baby crib environment.

We took a lot of photos at both baby showers.  These family gatherings of 4 generations are precious, as is the celebration of welcoming new life, living together, in community.
Culture Fiestas food Relationships Women