Precious Water - A Hike to the Source 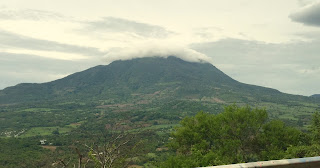 The people of this place live within their history as much as they live within their daily lives.  Beyond the highway, beyond the cobbled town streets, beyond the dirt road, they are isolated.  Atrocities during the war years left scars on their bodies, scars in their hearts and holes in their families.  They point to the places where women and children were massacred.  They sing their songs and they tell their stories.  This is a good thing.  This is a healing thing.  This is the work of the church in this place. 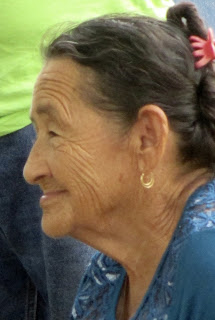 Little by little as family members were wounded in the struggle or and others were driven from their homes, the town was essentially abandoned.  Families sought refuge Fe y Esperanza, the Lutheran refugee camp Faith and Hope.  After the war, the old people returned home.  Some of the younger people went on to study or work in the city, and others joined their parents in tending the family farm plots.  The soil is fertilized by the milk cows that wander the fields where corn, beans and fruit trees produce abundantly.

The people never forgot the care which the Lutheran Church provided during painful times thirty years ago.  Now, through the work of the Commission of Historic Memory, the church has received the call from the people to build a little church here, along with a community center and a small memorial to the women and children who were killed in this place.  A small group of us accompanied the Bishop as he led the community in the first Lutheran worship the people have shared since they were refugees at Fe y Esperanza.  We celebrated Holy Communion with blessed water in a pink plastic cup, because no one could find any wine nor grape juice (nor even grape soda -- the Bishop was ready to be creative.)  The people celebrated, sharing the host and drinking the sacred water. 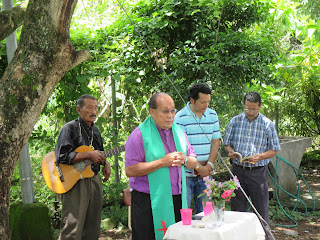 Earlier in the day, a group of us walked to the water source.  This is the place where the cows and humans alike go to drink.  This is the place where women have gathered for generations to wash their babies and their clothes.   The water source is a long walk from town, down, down, down to a grotto where agua dulce (sweet water) spills from the hillside.

The town's current water system works poorly.   There is no pressure and often no water at all.  The struggle to have reliable water piped to homes is echoed throughout El Salvador.  Thanks to improved coordination,  Habitat El Salvador is exploring the possibility of developing a new water system for this town, as well as for a few other rural Lutheran-Church-connected communities.  We walked to the source with a friend from Habitat to learn more about the quality of the water and the force of the flow.


We drove about 5 minutes out of town on a "road" (town consists of the school and a field and a scattering of homes alongside a small chunk of paved road).  Then we walked through a barbed wire fence and down a rocky, steep path.  "Watch out for the mine," said the pastor in front of me, pointing to a soggy pile of cow dung.  There were several mines amidst the rocks and roots and hanging vines.  The humidity was oppressive, but we appreciated the dense canopy which shielded our heads from the hot sun.  "This is the path that people take when they walk here," we were told.  I could not imagine walking down this path with a group of cows.

The water was cool and clear.  Years ago someone inserted a pipe into the rock so that the water from one of its exit points flows in a concentrated stream.  In other places along the rock wall, the water runs down the vertical face and collects in small pools.  In front of the pools ancient rock tablets, smoothed over years of use, give testimony to the generations of laundry beaten and scrubbed on their surfaces.  We drank, we felt the water, we walked in the oozy gravel and mud at the base of the pools.

"We came down the path for walkers, so let's go up the path that is used by people who ride a beast," someone suggested.  "That way you will get to know the route."  This seemed like a good idea because in my mind a person on horseback would probably use a slightly less rugged and steep trail than the one we experienced on the way down.  The first bit of the climb consisted of rocks, roots, mud and "mines."  It was an arduous climb and we used trees to help pull ourselves up.  Suddenly the trail opened up into bright sunlight and we were standing in a vast field filled with bean plants, butterfly weed and dotted with an occasional tree.  The soil was moist, black and fertile.  The grade was incredibly steep and we had to dig our shoes into the soil to make our own stairways to the top.  At one point the Habitat woman and I decided to plunk ourselves down in the dirt to catch our breath.  Apparently this was humorous and photo-worthy to the heartier Salvadorans among us.  In reality, I think everyone was a bit grateful for the rest.

The "beast path" was definitely shorter than the human path, and it did give us a chance to drink in the beauty of the hills and the valley and to feel what it might be like to farm on this very steep, steep land.  The friend from Habitat noted that there might be a way to permeate the ground at this higher level nearer to the town and to tap into the vein of water which gushes out below.

We finished our climb well moistened from perspiration and a little winded, but satisfied that we had been to the source.

Water - we forget to appreciate it until we do not have it.  We waste it until we have a limited amount of it.  Water - for washing, for bathing, for drinking, for blessing in a pink plastic cup - it is precious.