Off the Beaten Path: Climbing Up the Mountain with a Super Grandmother

October 03, 2016
On October 4, 2012, I wrote a story about a Grandmother.  After a little hiatus away from blogging (with my own grandchildren), today I realized it is October 4th once again.  In memory of the grandmothers who have gone before us and in honor of all of the super-grandmas who climb mountains, crawl around on the floor, bake yummy treats, tell inspirational stories and give fabulous hugs, I am writing today's blog story.  ¡¡Que viva las super abuelas!!

We wandered around the small town of Cinquera, then hopped into our micro-bus and, following the instructions from the town-folk, drove a little ways down the road to the roundabout with the giant ceiba tree.  With more than a little bit of skepticism, we hiked up a gravel and dirt road, hoping eventually to find a small rain forest in which we could do a little hiking and swimming.  We arrived at the Cinquera Ecological Park and were warmly greeted by our guide, Raquel.  The park has not been given any status or protection by the national government, but has been preserved by local citizens and scientists.

We were reminded that the people of Cinquera evacuated in 1980, leaving everything behind, including farm fields of corn, beans and vegetables which were cultivated to feed local families.  Throughout the war, the FMLN forces were strong in this region, and the fighting was intense.  The town was destroyed by bombs, and without cultivation, the fields were quickly overtaken by the natural forest.  The forest provided cover and resources for the guerrilla forces.  (Raquel pointed out that the engine from a downed helicopter on display in the Cinquera museum was evidence that the FMLN forces successfully fought against the military here.)

Today, the people of Cinquera, all of whom lost loved ones during the war, say that the only good thing to have come from the conflict is this forest.   Botanists from the botanical garden in San Salvador assist the locals in identifying the trees of this forest.  Each tree is counted and named, and a few very rare trees have been identified.  Trees known in Nicaragua and Guatemala (but no where else in El Salvador) have been found in this forest, their seeds brought in by bats and birds which migrate exclusively to this place. 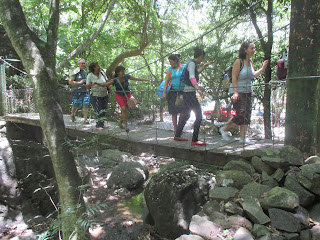 We walked to the swimming hole - a beautiful spring-fed pool accessible by a swinging bridge and a few rock-to-rock jumps over a stream.  A couple of people stayed to swim, and the rest of us followed the guide uphill about 20 minutes to the "blue pools."  These pools, made from natural rock and mortar (created with egg white) more than 150 years ago were used to process indigo into blue dye.  Our guide said, "Before the war, poor people wore white and wealthy people wore blue." (There are good examples of traditional clothing at the Museum of Word and Image in San Salvador.) The dye was created by fermenting the indigo plant in the first pool.  Rainwater collected in the pool via a gravity system.  Once fermented, the plant liquid was moved into the next pool by unplugging holes that exist between the two pools.  People then climbed into the pool and stomped on the fermented plants.  This process was repeated in a third pool.  The indigo was ready when it could be formed into a ball in one's hand.  The workers pressed the indigo into little cakes which were shipped throughout El Salvador and across the globe.

After the tutorial on indigo, our guide offered to take us up the mountain.  The less able among us walked back down to the swimming hole, and the braver ones decided to climb despite the heat and humidity.  We followed Raquel up a steep and narrow trail - the route to an old FMLN camp site.  Our first stop was a bunker near a large tree.  We paused here to catch our breath, drink water, and learn about the strategic shape and location of the bunker.  It was designed to hold 2 guerrilla fighters whose job it was to protect small bands of troops as they made their way back to camp with provisions and medicines.  The angle of the bunker drew fire away from the path.

The big tree was planted about 76 years ago.  There are only two trees of this type in the entire forest.  It began its life as a sprout on top of the oven of the Escobar family business.  The oven was used to cook crushed rocks and create a powdered, white paint that was used to paint houses and road markers.  When the sapling appeared someone in the business said, "Let's plant this tree here and it will serve a purpose some day."  During the war, this great tree saved many lives.  It's wide trunk protected guerrilla soldiers.  The trunk is marked with many bullet holes.

Not long ago, a nearby neighborhood petitioned the caretakers of the forest for permission to insert a pipe into a spring in order to bring water to the neighborhood.  Permission was granted, as long as no trees were harmed.  As digging occurred to lay the pipe, workers unearthed an olive green shirt, then a pair of short boots, and then a green bag like that which every guerrilla fighter carried.  Inside the bag were a change of clothes, a carpeta (small blanket), a rolled up hammock and a metal tin of toasted corn mixed with sugar.  If a fighter were without food, one spoonful of the corn and sugar would be used to "kill the hunger."  Nearby to the bag, the workers discovered human bones.  In this place, beside the bunker and near the big tree, an informal burial had been held for a fallen comrade.  "Sadly," Raquel reflected, "the trees of the forest are fertilized by the blood of those who fell here - guerrillas and military alike."  We sat on some benches and felt the presence of those who had lost their lives here, and those who had survived.  People of the corn.  People of the trees.

This was a serious moment, for those from the US walking in the legacy government-funded planes and bombs, for the Salvadoran youth and young adults walking with no war memories of their own but in the shadows of their parent soldiers or guerrillas or refugees, and for the grandmother walking in her story.  We sat for a while, before continuing our climb up the mountain...

the story of the climb up the mountain continues...