Off the Beaten Path: Climbing up the Mountain with Super Abuela (Part 2)

Yes, everyone including the grandmother said yes.

We climbed up and up to the Cocina Vietnamita (the little Vietnam kitchen) - an ingenious design of a kitchen built into the hillside, complete with tunnels lined with clay roof tiles that vented the smoke a long distance away from the cooking site.  This was done so that air reconnaissance could not detect the exact locations of the guerrilla cooking fires.

We continued our climb up to the former FMLN camp.  For a while, the teen boys carried my backpack and the other grandmother's purse.  Eventually they grabbed Super-Grandma under her arms and carried her up the steep, rocky grade so that her feet hovered just above the ground.  This was a very sweet act of kindness by the boys, and not a word was spoken as they scooped her up to fly.  We finally made it to a camp which is named after some kind of snake.  (I did not understand what the guide said as the name of the snake.)  Here the guide shared a story:   Two female guerrilla fighters had made their sleeping spot near to the entrance of the camp.  Huddled under their tarp they heard "hiss, hiss."

"Oh, it's just the boys harassing us," they thought.  They continued to read with a small light under their tarp. 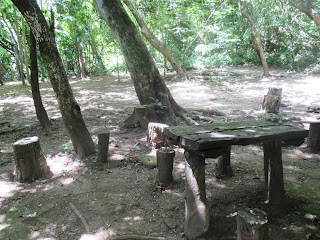 "Hiss, hiss," they heard a second time.  And then a third time!  They jumped up and saw the snake!  This same thing happened to two other women fighters in the camp.  No one knows why it only happened to the females, but the smart women realized that they should cut off the snake's head and save the venom sacks to make anti-venom.  Thus, this place is known as the snake camp.

The guide told us how the medics did surgery on flat bamboo slats that were lined up on a wooden frame.  The slats could be changed between patients to maintain a clean area.  The sterile table was close by, and a metal wire attached to a tree branch held the IV bag.  The field doctors did everything from stitches to amputations, and when it rained, the patient was protected by a tarp which was placed over the tree branch.  The surgical assistant held a small burning stick just above the place on the patient's body where the doctor was working so that no light could be seen by nearby soldiers. 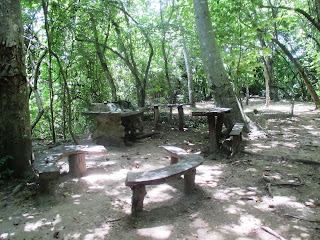 The sense of home was strong in this place.  We could feel the presence of young men and women who found their way here for healing and rest.  We could barely imagine receiving or giving medical treatment as the guide described. 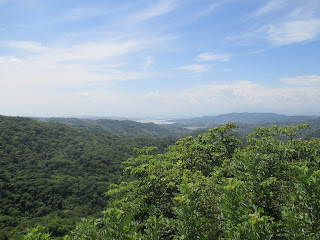 The revolutionaries who fought here, camped here, and survived here want to keep their strong sense of community and their unyielding fight for the human rights of oppressed and marginalized people alive.  I think that the work to preserve and grow this forest carries within it this desire of the community, to be alive again as a community knit together, to preserve the  deeply rooted values of the rebellion, and to grow together into a new and healthy life in this new time. 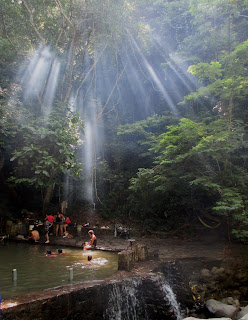 From the camp, we continued our journey upward.  Our chests were burning from the climb, but we made it all the way up to the look-out.  After climbing the final fight of stairs, we took in the amazing view, and then collapsed on the wooden platform to catch our collective breath. In this beautiful resting place, the super grandmother received her new name.  At age 67, she became La Abuela Mágica (The Magic Grandmother).  There is a famous Salvadoran soccer star who is known as El Mágico - so when the boys among us gave the grandmother the title "Mágica," it was quite a big compliment.

In all her humility, the Abuela Mágica looked at me and said, "No, the magic grandmothers."

We eventually mustered up the energy to make the climb back down the stairs, and down the mountain.  In no time at all we were back at the swimming hole where we found the rest of our delegation.  We had walked for 3 hours, and during the journey the grandmothers had become magic, though I think La Abuela Mágica has been magic for a long, long time.

On our walk back to the micro-bus, the Abuela Mágica laid down her walking stick - a straight branch which she had acquired in the forest.  She thanked her stick for accompanying her on her journey through the forest of Cinquera.