October 29, 2016
I put some thought into my outfit for the day.  Sensible black skirt, sensible black shoes, a white polo shirt with a big Luther Rose embroidered near the right shoulder, and a hand-made wooden cross hanging around my neck.  Just in case we were stopped at the entrance to the community, the clear Lutheran Church identity could be useful.

As we turned into the narrow dirt lane, with our windows rolled down, I waved.  A few people hanging out at the palm-frond-covered bus stop waved back.  A guy smiled.  "Good," we thought.  It was slow going because months of rain had washed away both sides of the road up to the paved area.  Our slow pace gave us the chance to call out "buenos días" to people standing outside their homes and the school.   It's important to let anyone controlling the streets know who you are, and to connect with friends who recognize you.  It's also just more fun to be those crazy, friendly, smiling Lutherans.
The paved area gave way to rocks.  The fine, gray soil flows away during the yearly rainy season, leaving behind a road of helter-skelter big rocks. We bumped along, turned into the open gate, and realized that although we were ten minutes late, we were just about the first to arrive.

Pastor Chemita had set up the tables and chairs in the church.  He is the coordinator for the Northern Micro-Region of the Salvadoran Lutheran Church.  Once a month, he convenes a meeting for all of the pastors and lay-leaders of the Lutheran churches in the region.  This day's theme:  The Reformation.  We stood outside the church chatting with Adelmo about the harvest.  A plague had killed all the pepper plants.  The tomato plants had mostly died too.  I asked if Adelmo's tomatoes ever got the powdery fungus disease (something my plants at home had this year).  He said that was exactly what his plants had; it kills the whole plant.  Pastor Chemita talked about the fruit trees in his community.  He knows a lot about different classes of medicine from the trees.  It is always amazing to me how much knowledge the Lutheran pastors and church-folk have about so many things!

A few more people arrived.  The others were late because the bus was super full.  Pastor Chemita said he prefers to ride in the back of a pickup truck whenever he can.  (This is an informal mode of transportation that is used in many rural communities.  A ride usually costs a dime.   "I like to talk to the people and hear about their concerns - their real concerns in their lives.  Then I can make my sermon and preach about the things that are relevant to them." 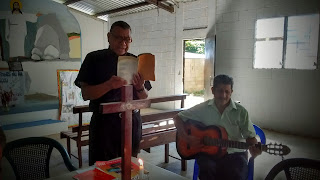 After a church van arrived with the majority of participants, we got started:  singing, praying,   and scripture reading.  The original plan was to watch a movie about the life and work of Martin Luther, in honor of The Reformation, but the woman with the movie and equipment did not show up.  So Pastor Chemita initiated Plan B.  We started by sharing our thoughts on the scripture:  Ephesians 2:19-22:

19 Consequently, you are no longer foreigners and strangers, but fellow citizens with God’s people and also members of his household, 20 built on the foundation of the apostles and prophets, with Christ Jesus himself as the chief cornerstone.21 In him the whole building is joined together and rises to become a holy temple in the Lord. 22 And in him you too are being built together to become a dwelling in which God lives by his Spirit.

Here are a few of the comments made by those gathered...

"We are none of us strangers who live on this spinning disc surrounded by air.  We are one family.  The difference between us is the way in which we receive the grace of God."

"The important thing is we gather together and whatever we build, we center it on Christ.  Then it is big enough for all; there is room for all."

"Returned people [deported from the US], or foreigners alike, as the called church, WE are called to love them.  We are called to defend life - abundant life.  Last night I received a call to talk with the police regarding a youth who was captured.  This is our life, the pastor life, to come to the defense of those who are innocent."

We shared a review of the life and theology of Martin Luther.  Pastor Chemita asked us to think about the Reformation and what it means to be a prophetic church.  He raised up the example of the first prophet mentioned in the Bible:  Miriam.  Miriam gave a prophecy about God's power of protection for God's people.  Her song was sung in "harmony" which means that the people were in "one accord with her."  Pastor Chemita pointed out that not too many churches talk about Miriam as the first prophet, because she was a woman.  Luther preached about the priesthood of all believers - this concept that God's work is equally in all and done by all was reborn in the Reformation.  Katie Luther is an example - she was out spreading the faith while her husband was holed-up writing all the time.  The women pastors around the table chuckled at this.

At some point in the morning, we broke for our refrigerio or snack - small, pre-packaged quesadilla (a sweet dessert cake) and coffee.  We resumed our discussion about the Reformation, and people were invited to share their ideas about how we experience the Reformation today...

"God sent the Mission of Healing to El Paisnal as a prophetic mission of prevention.  The doctor at the clinic tells me that the people who used to demand medicine now ask for explanations about their problems and want to learn.  In reality, the people would have called for her to be fired had this transformation in their culture not taken place because there are not enough medications for everyone to be taking pills all the time for everything.  God sent the prophetic voice of prevention told at this mission."

"We have learned that we need to respect each person as a prophet because God is using each one of us.  This is the priesthood of all believers that Luther talked about."

"How do we know if the social works that we are doing are pleasing to God?  Luther says, 'Read the 10 Commandments.' We are working on that, studying the Catechism."

"We are not obligated to anyone, but must serve anyone.  Luther taught us to focus on loving our neighbor."

"With or without money, the Reformation continues via our faith and our confession.  The Word of God is from the beginning and will exist until the end, and we, as holy people, need to work with all of our enthusiasm and faith."

"Luther said, 'Laughter is healthy' so this is why pastors should tell funny stories at the start of their sermons."  Well, I wondered where that tradition had started.  Good job, Martin Luther.

The study concluded and Pastor Martina brought out the raffle item.  Everyone who could paid 25 cents for a number.  All of the names and numbers were written on a big piece of paper and taped up onto a door, and then little number papers were put into Adelmo's straw hat.  Numbers were drawn one by one, and with great laughter and anticipation people cheered and names were eliminated until finally the last number was drawn, and that was the winner.  My husband is very lucky at these raffles, and so walked away with a new aluminum pot and coffee mug with red hearts on it, all bundled up in clear cellophane and tied with a yellow ribbon.

Of course the final activity was to share announcements.  This is an important part of the meeting because not everyone has reliable cell service or money to pay for cell service or access to the internet.  The pastors shared information about all of the upcoming workshops and community events.  Training sessions will be held for representatives from each congregation who will learn how to use social media, web sites, and communication tools to better share and promote ministry events.  Pastors were invited to a conversation about how to better accompany victims of domestic abuse.  Church health promoters will meet next week to continue their training.

We shared a closing prayer.  Lunch was delayed, so Pastor Abelina served up small plates of hot, boiled yucca with lime and salt.  Yum!  Quite a long while later, we were each served a plate of chicken, rice, salad and tortillas.  It was substantial and delicious.

As we left the community, we waved to the women and youth standing outside their homes and in front of the school, calling out buenas tardes along the way.  Some of the people waved back.  Some just gave us a look that seemed to say, "there go those crazy, friendly, smiling Lutherans."