In small towns and municipalities, Independence Day celebrations are led by school administrators, teachers and band directors.  Parades and fiestas pop up throughout the month, but the big day is September 15th.  Streets are blocked off, big stages with giant speakers are set up in front of mayor's offices, Ministry of Education officials prepare their speeches, and little children practice the pledge to the flag. 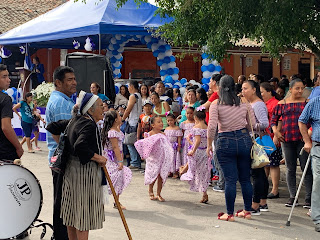 This year, I marched with our community family circle (like a preschool for parents and kids from age 0 to 4).  The littlest marchers in Salvadoran Independence Day parades dress is costumes that reflect their future career choices.  They walk beside their moms or dads, and usually end up being carried for a good portion of the parade.  The creativity and stamina of the parents is impressive.  By the end of the parade, the little ones and parents were ready for a slice of pizza, a cold drink and a nap.

Here are a few photos of the tiny marchers:

For a brief story from a year ago...
Happy Independence Day
Culture Holidays Kids Photography