September 23, 2019
One day before, the church was dedicated and recognized as Resurrection Lutheran Cathedral - a new name for a new building for an historic church. August 5th was a day of celebrations and ordinations.  On this day, August 6th, the church continued tradition of honoring the anniversary of the consecration of Bishop Medardo Gómez as Bishop of the Salvadoran Lutheran Church with a march through the streets of San Salvador.  The street in front of Resurrection was barricaded, a stage had been erected, white canopies stood ready to shade hundreds of guests seated in hundreds of white plastic chairs, papel picado fluttered in the breeze, and vendors stood ready to sell snow cones and homemade frozen things on sticks.  As the sun rose high in the sky, about a thousand hot and sweaty marchers, wearing pastoral regalia, community t-shirts, floppy hats and tennis shoes, and carrying banners, umbrellas, sleepy toddlers and cardboard crosses on sticks, made their way into the assembly square. 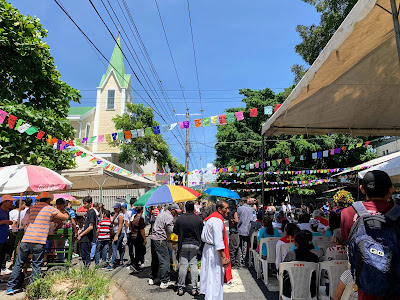 Once the banners were laid out in front of the stage, folks hurried to get in line for the bathroom or to find a chair in the shade.  The bathroom line at the Lutheran Clinic offered a 45 minute wait.  Little children crawled into Resurrection pews to take naps.  By the time I arrived in the square, the chairs were full and distinguished guests began to speak.  I actually don't mind the freedom of sitting on a curb or standing in a little slice of shade beside the Lutheran Clinic.  Being stuck in a chair limits my chance to say hi to friends who I might only see this one time during the year. 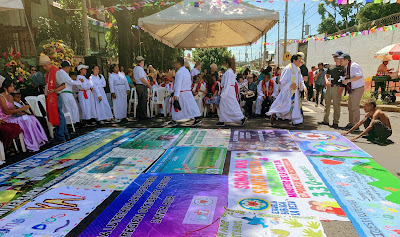 Saying hi to friends is how I ended up by the snow cone vendor.  A pastor friend was purchasing a snow cone.  It was not for herself, but for a man whose home corner had been taken over by a giant party of Lutherans.  The man had no hat  The man had no shirt.  He settled himself in the middle of the intersection where the banners were being laid and was slowly being pushed aside.  Maybe he was talking to himself.  Maybe he was talking to God.  He was in the middle of things.  "Could you encourage him to move?" someone had asked the pastor.  This pastor is kind, generous, and has a gift for gently speaking with people who are not quite in their right minds.  Surely the man was thirsty.  She guided him toward the snow cones and bought him a treat.

"We need to find him a shirt," she said.  She said she had a few people looking for one.

"I think I know a guy," I said.  I thought about the guy who used to sell us Diet Pepsi.

By chance, for a number of years we used to have the Mission of Healing in the Lutheran Clinic, which is across the corner from Resurrection.  Two in our group drink Diet Pepsi, and the guy who runs the little store right next to the clinic always stocked a few cans of Diet Pepsi for that one week of the year.  It occurred to me that anyone kind enough to go to the trouble of remembering to stock Diet Pepsi one week each year would surely sell me a t-shirt.  I hoped he had one.

I walked over to the store.  After saying hi to the store-keeper's wife, I asked her if she had any t-shirts or any shirt at all that I could buy.  "No, no shirts," she said.

Just then her husband appeared.  I explained the whole story to him, about the man and my pastor friend and the need for a shirt.  I pointed out my tall, blonde friend on the other side of the intersection.  He told his wife to go into his closet.  He thought he had a blue t-shirt in there.  In a few seconds the wife appeared with the shirt. He handed it to me through the bars of the store window.  "It's not new," he apologized, "but it still has some good life in it."

"Wow, you got a shirt!" my friend said with a hint of joyful surprise.  I told her I had asked the storekeeper.  She took the shirt and gently dressed the man while I held his snow cone.  The man held his hands to the heavens, and gave praise and thanks to God.  I walked back to the store to thank the storekeeper again, and to let him know how much joy the gift of the blue shirt brought to his neighbor.

"May I give you a blessing?" the storekeeper asked.  He showed me a book that he was reading.  It was an old book he had bought for a quarter and was a theological work about the ancient mystics.  He told me he was a man of great faith.  We had never really talked about our faith before - just pleasantries and Diet Pepsi.  I stood close and the storekeeper stuck his hands out between the bars and put them on my head.  He gave me a blessing.  Speaking and understanding spiritual tongues is not my gift, so I did not comprehend a word of what was said, but the energy was real.  I thanked him and shared good-byes, through the bars, with his family.

I turned to my husband, who had come over during the blessing.  I felt a little overwhelmed.  I looked down at my shirt.  I was wearing two shirts, because our Salvadoran community had given me a special shirt before the parade began hours earlier.  "I could have given the man this shirt," I said.

"No," said my husband, "that would have hurt the feelings of the community."  That is what I had thought too. Still, I was wearing two shirts. 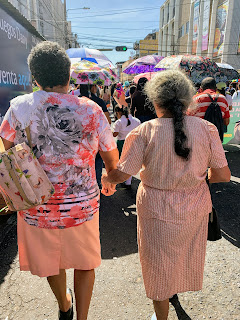 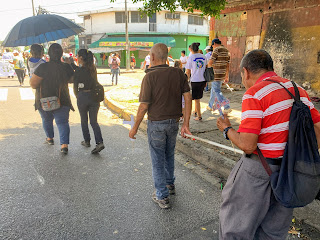 "We should love our neighbor," said the storekeeper.