Return to the Valley of the Angel

September 16, 2019
More than five months ago, activists from the Salvadoran Lutheran Church were instrumental in creating a demonstration along the Calle de Oro which carries traffic from the north of San Salvador to Apopa.  The highway runs through the Valley of the Angel, where a proposed housing and commercial development threatens the land which replenishes El Salvador's largest aquifer and the source of potable water for the municipalities of Apopa, Nejapa and Quezaltepeque. 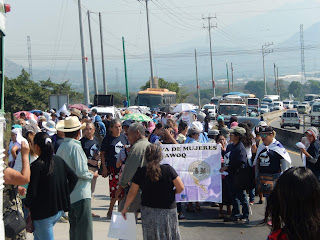 In El Salvador, the ecumenical movement to protest the development in the Valley of the Angel has grown. Sunday morning announcements in the churches invite the faithful to participate in civic  action, demanding governmental intervention on behalf of the people who have a human right to access clean drinking water. 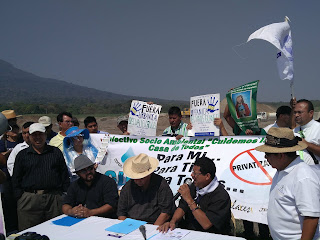 From the very first verse of the Bible in Genesis, we encounter the biggest example of caring for creation that God gives to us.  In the seven days of creation, we encounter the communal house of God:  water, land, plants, sky.  These were created in five days.  Later the man and the woman were created.  This shows us what God wants.  God said all humans should have dignified lives, with all that is needed to live as sons and daughters of the Creator - clean air, clean water, a garden, a healthy environment.

The mission of the church is to proclaim the good news which is God's plan for abundant life.  This mission is not complete if we do not denounce the sins which go against God's plan.  When we hear the clamor of the people - the cry of desperation, when we look in the face of sadness and see the pain of suffering people, when we hear and when we see communities that are powerless, when the people think that all is lost and that history will repeat itself, when the people believe that only those with money will get what they want, the people clamor and cry and call for help.  The church, in the name of God, commands us to listen and to walk with the people.

In the community, there are many churches, full of people who are faithful believers in God.  When the community is at risk, we churches have to make a big decision.  As the Lutheran Church, the people in El Salvador have known us for many years.  The Salvadoran Lutheran Church is always at the side of demanding justice.  We are always firm stating that which the Bible says, that the people - the community - will have peace only if first there is justice.  This is why we moved into the work of being light in the Valley of the Angel.

The Valley of the Angel project is big and we are a tiny country.  There is only water in a few places, and there are only a few places where we have mountains and forests to recharge the aquifer.  As a pastor, I have to remember the words of Genesis, that God first prepared the garden so his sons and daughters would have light, shade, water and rest.  God did not make money, industry, riches, and consumerism the priority.  We have to say 'NO' to this project which will make little islands of luxury with security fences that people leave and drive in their cars to the grand capitals to work.  Meanwhile, the people who have lived in the heart of this fertile land for 50 or 100 or more years will be pushed outside the fences to live in extreme poverty, struggling for each day of life.

The law of this country is weak.  Institutions are weak.  Local government doesn't resist  economic temptation and falls into being accomplices to corruption by large and international businesses.  The law says that local governments exist to care for their people, but here in our country, these principles of caring for local people by caring for local resources  were lost many years ago.  Therefore, the church has this mission:  to accompany the poor and to talk to those in power.  The church has to GO. 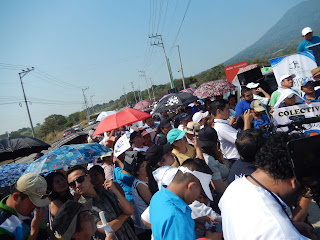 In my notes, I underlined the statement The church has to GO.  How many times have we who are church folk been in meetings or workshops when someone has lamented, "But how do we get more people to come to church?"  The church has to go.  That statement can be interpreted in some pretty challenging ways.  Pastor Santiago always gives me something to think about.

Also in my notes from the conversation with Pastor Santiago (well, really it was more like a monologue), I wrote this personal observation:  Walk in faith, know your science and know your facts.  While the focus of Pastor Santiago's words for this story was on faithful and scriptural motivation for taking social action, data and analysis from a wide range of studies and surveys was peppered into the conversation and is part of every action the church takes with the government.  You cannot speak with those in power if you have not done your homework.


Pastor Santiago concluded his remarks with this:

We have never had a zone [of the country] change from being an industrial zone back to the 'monte' (wild spaces, forest, mountains).  After the cultivation of sugar cane came the change to the soil.  It can't go back.  But the utopia - the cry of Mother Nature is to go back.  To go back from cement to cane to coffee to forest.  Industry cannot imagine this, but the church can.