When someone says 'Soyapango' what comes to mind?  Violence? Violence due to gangs?  Commerce?  Factories?  Probably not an ecological park.  We are working to break the stereotype and bring another identity to Soyapango.

When we suggested to our long-time friend and driver that we go to Parque Chantecuán, he was a little bit skeptical.  The Mission of Healing post-team had spent the morning visiting the public clinics in Nejapa and Guazapa, and we were hoping to do a little something fun for the early afternoon.  I had found an article about the park online and was actually able to find it on Google maps.  The trick was figuring out which road actually has access to the park.  The article said to take the "old road to Tonacatepeque." Our driver was not the only one who was skeptical.  This is familiar territory and we are aware of the groups that control the area.  We collectively decided to give it a try, and after carefully figuring out our route, we headed to Tonaca.

Our driver verified with a couple of people on the edge of town that the unmarked dirt road we chose was the way to Chantecuán.  We went through a couple of small neighborhoods whose names I recognized from previous conversations with women from the region.  Just a few minutes outside of town, the roadside foliage gave way to reveal an amazing view of the Las Cañas river valley.  We crossed a bridge over the river. 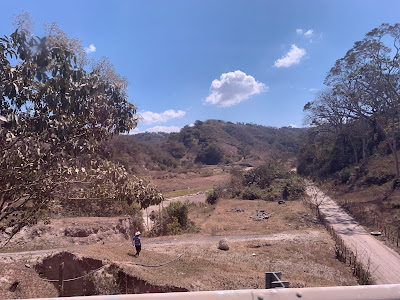 As we made our way through the valley, around the curves and back up again, we wondered if we really would find the park.  Blue barrels hugged the side of the road while children waited, watching for the water truck.  One of the big challenges in this area is the lack of a reliable water system.  The people only have water once or twice a month, so they have to pay for trucks to come in and fill up their blue water barrels.  We passed a little school and just at the edge of a neighborhood, we arrived at the park entrance. 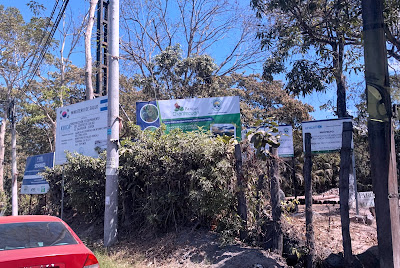 Parque or Finca (Park or Farm) Chantecuán is a development project orchestrated by the mayor's office of the municipality of Soyapango.  The Nahuat word "chantecuán" means cave of the caldron or wild beasts.  We drove in, noticed the heavy military presence, and found a spot to park.  It is a very informal, peaceful and rustic place.  We were the only visitors that we could see, but there were lots of workers busy with construction and landscaping projects.  We had to find someone to ask if there was an entry fee, a place to eat, tours, etc.  All are welcome and the only fee is $1 per person if you want to do the "extreme sports canopy tour" (zip line).


We learned that the place to begin is at the ranchón, a two story thatch multi-purpose space with nearby bathrooms and the park office.  We grabbed some lunch at the one little food stand (the chicken, rice and HUGE country-style tortillas were very good) and carried it up to the second floor of the ranchón to eat.

Since we did not have hiking boots or walking sticks with us, we ended up using our vehicle for touring the main road.  We got out and explored a few of the paths along the way, accompanied the entire time by a very knowledgable and passionate guide.  The park is a reclaimed site and sits on top of an old open-pit garbage dump.  At our first lookout spot, I looked over the edge and could see shoes, chunks of concrete and other trash peaking out from the hillside.

Along the main park road, the staff have built small features from reclaimed wood.  The idea is to create a park that is welcoming, where families can walk through the trees, appreciate the birds, and have picnics.  There are several species of trees that are in danger of extinction which are being preserved and the park is a favorite spot for the torogoz (El Salvador's national bird).  Beneath the taller trees, park workers have planted more than 75,000 coffee trees.  The coffee which is grown on the property is used by the mayor's office for their daily coffee consumption and for special events.


At one point we arrived at the place where the "easy path" meets up again with the road.  Our guide paused to tell us a story.  Hopefully I understood it correctly:  There is a belief that a young girl, who is very pale, appears at noon in this spot.  She only appears to those who have no children.  Well, who knows what is true.  But I have a university friend who came here.  One day she encountered a little girl in the park on the road.  She asked her, "Where are your parents?" and the little girl said they were up at the ranchón.  So my friend took the girl's hand and they walked uphill to the ranchón.  "Where are your parents?" my friend asked again, and the girl said that they were inside.  My friend let go of the girl's hand and went forward to look.  When she looked down at her side, the girl was gone.  So who knows!

We visited a colony of beehives which were set back in the woods.  We had to walk very quietly and very slowly.  The honey produced by the bees is given to Benjamin Bloom children's hospital, where it is used to treat burn patients.  (The honey has natural antibiotic properties which help prevent infection.)

At the end of our tour we returned to the ranchón where we were invited into the office.  We were served coffee (grown on site) in traditional clay bowls.  We tasted the honeycomb.  We examined artifacts which were left behind by the Indigenous people (there are stories of a great battle which happened in this valley) which includes pottery pieces and spear points made of obsidian.  There are also artifacts which were found in a tatú on site - a dugout used by FMLN fighters during the war.

The staff were so incredibly kind and dedicated to their work.  They gave us 2 bags of coffee as gifts, saying that the coffee they produce is not for sale but is for the people to enjoy.

The quote which appears at the start of this story is the part of our office conversation which impacted me the most.  Throughout El Salvador, there are young people who have struggled to grow up in neighborhoods which are challenged by the impact of poverty, violence and lack of opportunity. Whether they are deserved or not, many neighborhoods have a bad reputation or stigma attached to them.  Projects like Finca Chantecuán bring positive energy to a community.  Hopefully this park will continue to grow and develop into the ecological preservation and recreational site which the young people who work there see in their dreams.

Note:  This park is especially designed for youth groups that might enjoy extreme sports like mountain biking, difficult climbs with ropes, and zip-lining.  It is also a great spot for walking and learning about the local flora and fauna.  Access from Soyapango is a little easier than from Tonaca if you are coming from San Salvador.