Why Are You Here? The Fight Continues to Save the Valley of the Angel


The actions this morning were not our first acts of accompaniment with the Salvadoran Lutheran Church in this valley. In a nutshell, the aquifer in the Valley of the Angel is being depleted by industry, the people who live in and around the valley barely have any water flowing to their homes as it is, the soil in the valley is nutritionally depleted and filled with chemicals from decades of sugar cane production, and a wealthy family bought up enormous parcels of the land from the cane production company.  This family, the Dueñas family, has been busy privatizing water sources, and pushing its development plans through the government.  The prospect of drilling new wells to serve 8000 new residences and of paving huge swaths of the valley place the watershed and the aquifer at great peril.  The citizens of Apopa and Nejapa, the entire region north of San Salvador, are at risk of a future without access to water. 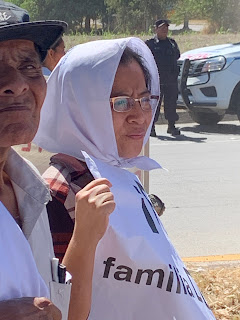 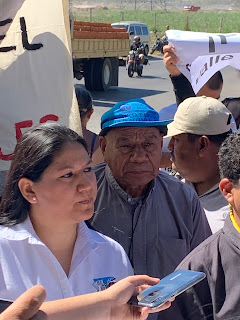 This morning I decided to walk up to random people and ask a question:  Why are you here?

Grandmothers made up the majority of the citizen protesters.  They held signs calling for the real estate developers (the Dueñas family) to get out of their valley.

"Drip, drip, drip.  That is how our water runs now, if it runs at all.  Can you imagine what the future will be if they build all that development?  No water.  Our children will have no water."

I walked through the center of the traffic circle.  Small vendors had parked their little trailers in the shade and hastily set up tables and benches.  My mom used to say, "Make hay while the sun shines."  Salvadoran entrepreneurs are really good at showing up in places where they can make a little income.  Some sales were made but no one really sat down to eat.  The people were committed to holding their signs up and receiving the occasional beep beep of support from a passing truck. 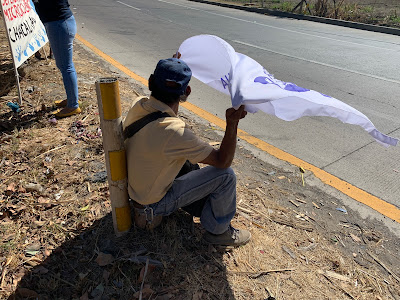 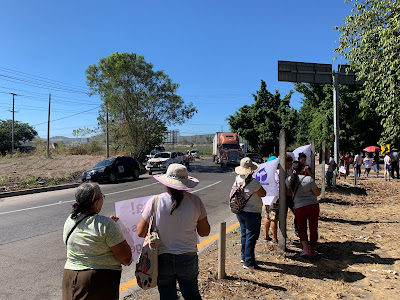 From time to time someone led chants calling out the alert.

"May I take your picture?" I asked a man who had wrapped himself in a Foro del Agua flag.  He struck a pose.  The faces, the words, the actions of the people were those of serious, well-informed, dedicated citizens who are fighting for the lives of their families.  Families cannot live without water.  Families cannot afford to purchase bottled or trucked-in water to wash their clothes, bathe themselves, cook and drink. 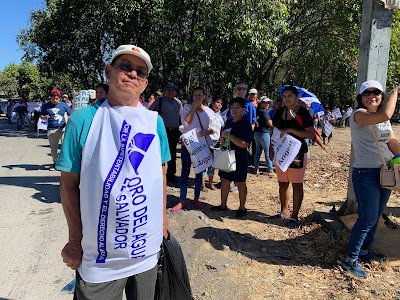 I walked among the people, reading their signs, shaking their hands, asking, "Why are you here?"

"We are defending the trees, fighting the destruction of the trees."


"The trees give us life.  They literally give us oxygen."


"The trees are a protection for the aquifer.  They hold the moisture, the water is replenished.  Without the trees, the aquifer will dry up." 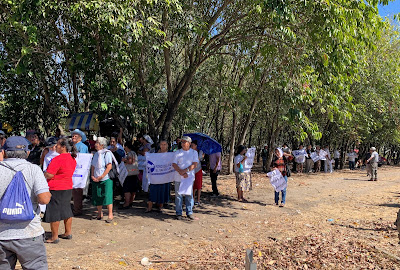 At 10:00 AM the leaders gathered everyone together for a press conference.  A few people pushed toward the front and held their cell phones up to record the statements.  There were no TV cameras.  Later we heard an excellent report on the UCA radio station and saw an online video, so we knew they had been there.  Getting the word out to the media can be a challenge.

"The Ministry of the Environment cannot remain deaf to the cries of the people.  The people have spoken through more than 4500 letters delivered to the government.  The people are speaking here with their feet and with their voices. " 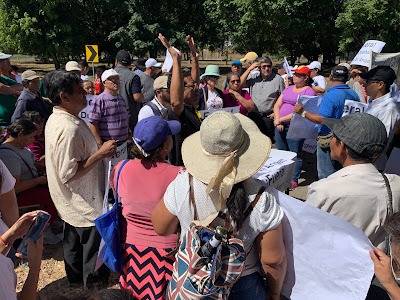 Pastor Santiago read the list of 4 demands.  They include asking the Dueñas family to stop pressuring public authorities and using economic interests to do so, calling the president of ANDA (the water system) to explain to the legislature why they gave authority to the Dueñas family to control a large quantity of public water, calling the Ministry of Environment and Natural Resources to give a public response to the 4500 letters written by concerned citizens, and that the Constitutional Chamber act with haste in ruling on the demands which were presented on October 4, 2019 because in the interim, irreversible damage is being done in the valley. 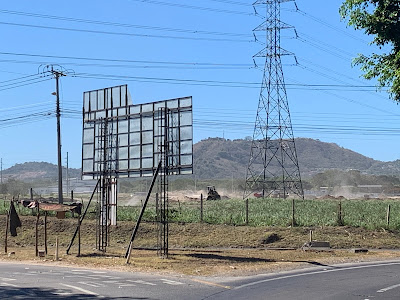 Throughout the first hour of the event, big earth-moving machines were working at a distance across the road.  One leader grabbed my arm and pulled me to the edge of the traffic circle and asked me to hold my phone up high and take pictures.  Another leader later explained that the development project on this sight is not part of the Dueñas family's massive residential and commercial development.  The leader told me that this plot is owned by someone else, but the permission granted by the mayor's office and government entities to build (perhaps a warehouse) here is a power play and a slap in the face to the citizens. 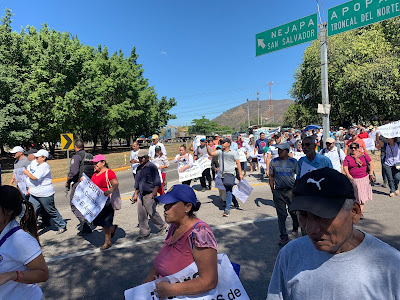 After the press conference, a quiet movement occurred among the people to organize a walk to where the earth-moving machines were working.  The leaders organized police accompaniment, and the protest went on the move.  Traffic was halted, the group crossed two branches of the highway that emanate from the traffic circle, walked into the cane field and approached the embankment adjacent to the work site. 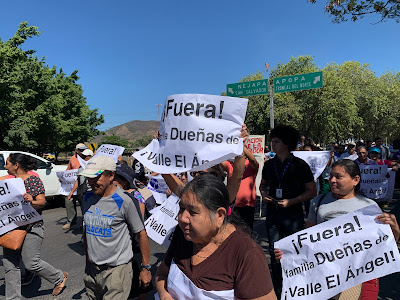 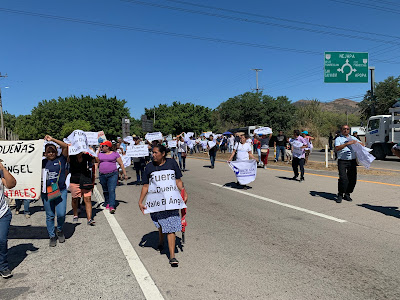 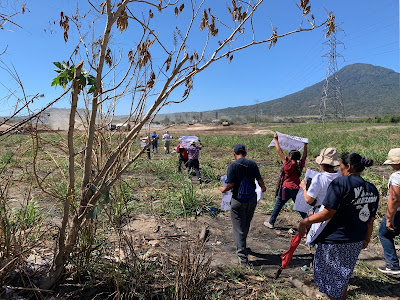 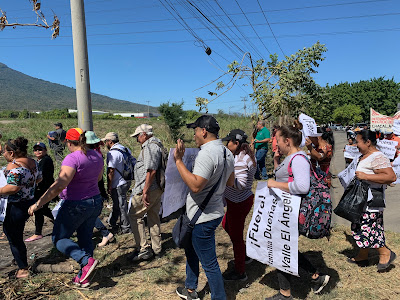 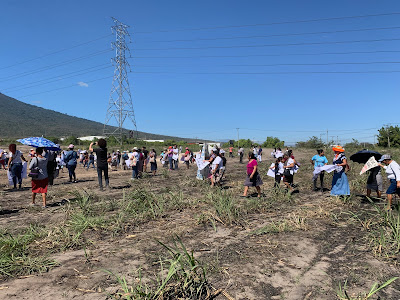 The ground rumbled under our feet.  The dusty soil mixed with ashes covered our shoes and our cameras.  The people formed a line, facing the trucks, holding their signs high, making a statement.  At one point, a few in the crowd became frightened as the sheepsfoot roller came toward them, which they perceived as an aggressive gesture. A few of them dropped their signs.  People shook their heads, lamenting what was happening in their valley.  It was the lament of generations, of sadness for Mother Earth and what we have done to her.  Pastor Santiago gave a few interviews at the edge of the work site. 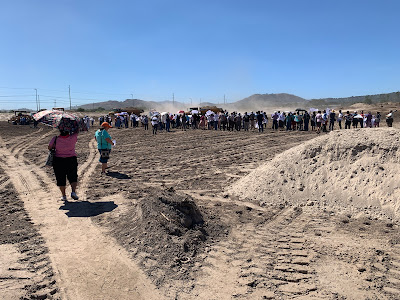 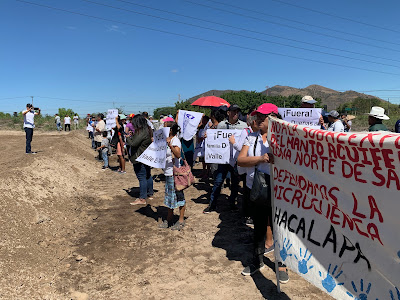 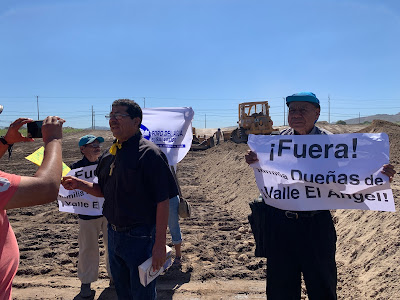 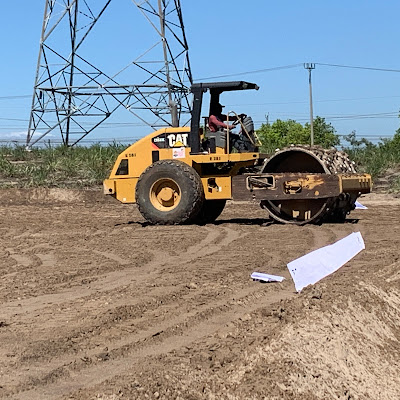 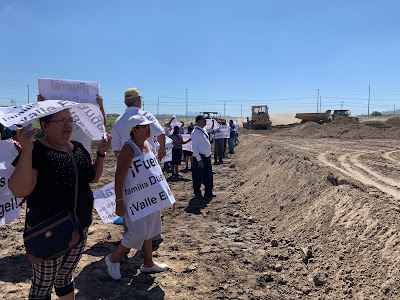 After protesting on the site for about 20 minutes, the crowd dispersed.  We made our way back across the field, and the police watched out for us as we walked across the roads back to the buses, the pick-ups and the cars that had brought us to the Valley of the Angel.  Later I learned that the Catholic parishes in Nejapa and Quezaltepeque had organized transportation.  Later I learned that the leaders were a little bit surprised at the quantity of everyday people who had organized themselves and committed themselves to participating in the event.

An old man asked me a question, "Do you always accompany the church here?"  I said that I often do.  "I thought so.  I have seen you.  Thank you.  You are beside us defending the water.  You are helping to get the word out.  You can get it out further, out there."  He gestured with his hands.  Then he took my hand in both of his, and shook it, looking up at me with a big smile.  I can still feel the firm grip of his thick hands, the hands of a farmer, a farmer with crinkly eyes and a smile full of heart.

Why am I here?  The old farmer asks the question.

Hope.  In accompaniment there is hope.  That is why I am here.