March 08, 2020
One of the medical professionals places a rectangular, clear plastic tub filled with a pinkish orange liquid on the edge of the stage.  Pregnant women pace in circles groaning and clutching their bellies, waiting their turns. One is very young, very frightened.  Another reluctantly takes her position on the stretcher.  Suddenly, a doctor dunks a baby doll into the liquid and tosses it to the nurse, who tosses another doll to the doctor and the two of them play this juggling game of dunk, toss, dunk toss.  The pregnant women are groaning.  The woman on the stretcher wakes up after a c-section, alone and afraid.  Where is her baby?  Dunk, toss, dunk toss.

The audience does not know whether to laugh or to be horrified.  Both are appropriate responses as
the violent experience of childbirth for poor women in El Salvador is interpreted by the actresses of  La Cachada Teatro.


This is one scene from the play, "Si vos no hubieras nacido" (If you had not been born),  directed by Elgy Larreynaga.  The play is made up of scenes from the lives of five women who sell goods in the streets around the central market in San Salvador.  Much of the play focuses on the way in which sexual education, customs and violence are passed on through generations of Salvadoran women.   In 2019, a documentary film, "Cachada:  The Opportunity" (written and directed by Marlén Viñayo)  was released, which reveals much about the personal lives of the members of La Cachada theatrical troupe and provides a detailed history of how and why the group was formed.  (I saw the documentary in October at the Milwaukee Film Festival, and highly recommend it - especially for anyone who has connections of partnership in El Salvador.)

We saw "Si vos no hubieras nacido" on a sunny, January afternoon in the amphitheater in Parque Cuscatlán.  It was free.  As the crowd gathered, sounds recorded inside a womb filled the space.  On the La Cachada website, a description of the play states, "from the time we were in the womb, we heard calls, cries, sales in the streets, buses."   One of the women straps a big cloth doll to her side, another on her hip, a smaller one on her shoulders and carries a baby in her arms, balancing a huge stack of toilet paper on her head, calling out to any that might want to buy.  The women huddle together, each with an arm extended upward grasping an invisible bar, bouncing up and down as if riding the bus.  Some call out what they have for sale.  The women help each other stay balanced over the bumps.  The scenes that are played out on the stage were written by the women, lived by the women.  They are scenes which play out every day in the center of San Salvador.

After seeing the play, I decided to send a message to La Cachada Teatro's Facebook page.  I asked about the name "La Cachada" and how it was chosen.  I am not sure who in the group answers the messages, but it was really prompt and kind:  "...when we decided to mount this adventure to make a theater company, we said we needed a name, and we started a brainstorm.  What was clear was that the name would take into account our roots and our origin.  There were various proposals:  theater of the basket, the sellers, and La Cachada theater.  We decided on La Cachada because that word represents an opportunity to obtain something.  In the markets, it is a word that is used for a product that has a cheaper price.  In the theater we had our transformation, and a forum in which to also transform our society.  The theater was the Cachada of our lives, this opportunity to deconstruct learnings and construct something new."

Like the dunk and toss scene, there is another scene in the play which has stuck in my heart:  the quinceañera dance.  The actresses are little girls again, playing, going to school, struggling with absentee fathers and angry mothers.  The little girls play beauty pageant, they twirl, they dance.  Eventually one turns 15, and she dances the quinceañera waltz (the music EVERY Salvadoran recognizes).  She is waltzing, and gradually peels off her pink princess dress.  The music changes.  She changes.  Suddenly everything is sexy and even through she is only 15, she is pressured into a relationship.  In the course of a waltz, this little girl is suddenly a woman and in the next moment, she is pregnant.  The audience is quiet.  We have all been there - to the quinceañera party when after the waltz, the birthday girl changes into a short little dress, and the music is loud and sexy.  Even young children are out on the floor, dancing sexy. 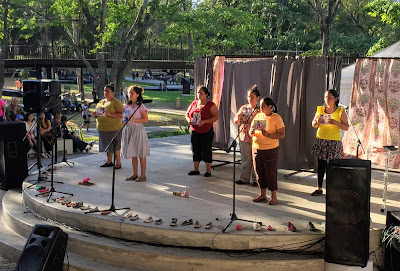 After the play, there was a talk-back session.  The actresses held up photos of themselves.  They told a little bit about their lives, what they have discovered about themselves, about their mothers, about their grandmothers.

Audience members asked some questions, and made some comments.  There was a young male doctor in the crowd.  As he took the microphone, he choked back tears.  He is a medical professional.  He is also a husband, and a father.  That scene of the pregnant women being treated as if they were cogs in a machine that was pushing out babies really got to him.  Dads are not allowed in the delivery rooms.  Is this how it is for the women?  Is this how his colleagues are?

And that is the point of the work of la Cachada Teatro - to get to you.

The sun dipped low in the sky.  The crowd dispersed into the park.  I wandered over to the cast to thank them as they were picking up their props, taking down the set, pausing to take selfies with people.  I thanked the director for her work.  She gave me a big hug. 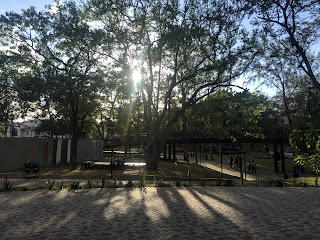 Today is International Women's Day.  I decided to take a peek at the La Cachada Teatro Facebook page to see what they posted.