I remember when I was a little girl.  Padre Rutilio would come here to visit - to this very house.  He was very kind.  He would play with us.  He would even play soccer in the field.  He came here often.

We were in the hills outside of Guazapa at a small Lutheran Church which had been built alongside a home.  This was a site for one of the 2020 Mission of Healing Family Health Fairs, and during my teaching charla, a local woman was very eager to share her memories with me.  I was giving a nutrition charla, and perhaps because we were talking about the blessing of the tortilla on the Salvadoran table, she was reminded of Padre Rutilio Grande.  She remembered thats he talked about being welcome at the table and that he would never turn down an opportunity to share a humble meal in a home in the community.  As she talked about Padre Rutilio, the middle-aged woman's face lit up with the joy of a little girl.  Clearly Father Rutilio was someone who was very special. 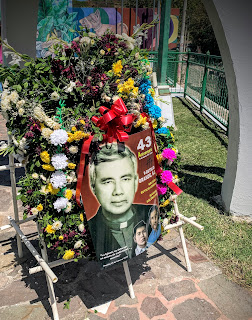 Rutilio Grande was born in El Paisnal in 1928 and joined the Jesuit order at age 17.  He was a teacher at the seminary and became the parish priest in Aguilares in 1972.  He worked with the local people as priest and community organizer, holding up the value of education and encouraging the people to fight for land reform.  His sermons antagonized those in power.  On March 12, 1977, as Father Rutilio Grande was driving on the road to El Paisnal from Aguilares, a death squad sprayed his vehicle with machine gun fire.  Father Rutilio was killed instantly, along with a 15-year-old boy named Nelson Rutilio and a 72 year-old man, Manuel. 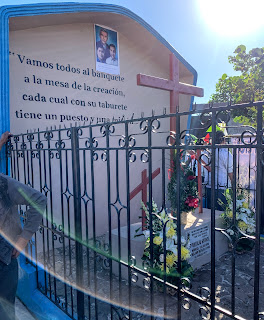 On February 21, 2020, Pope Francis approved a statement declaring Father Rutilio, Nelson Rutilio and Manuel as martyrs for the Catholic faith.

On March 12, 2020, pilgrims from the local parishes in Aguilares and El Paisnal gathered with faithful pilgrims from across El Salvador and beyond, to honor the memory of Father Rutilio and to walk in hope of his pending beatification. 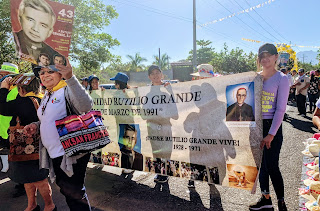 Outside of El Paisnal, there is a small community which bears the name Rutilio Grande.  It was formed as a resettlement community in 1991, just before the Peace Accords which ended the Salvadoran Civil War were signed.  Lutheran Churches in Milwaukee, Wisconsin accompanied the people of Rutilio Grande as they returned to El Salvador from a refugee camp in Nicaragua.  That accompaniment continues today.  This explains why a little group of Lutherans from Milwaukee can sometimes be found among the pilgrims during the annual March 12th pilgrimage. 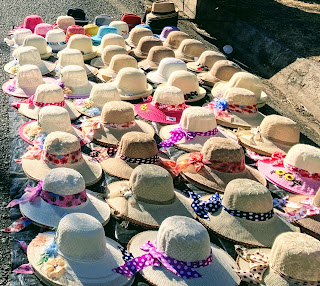 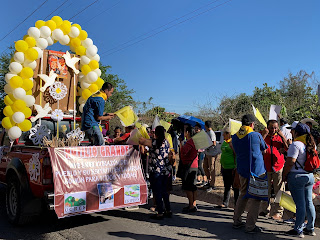 We joined the small crowd which had already gathered at Las Tres Cruces (The Three Crosses) in the early morning sun.  Vendors with sun hats, t-shirts, pupusas and coffee were lined up at the edge of the road.  Chartered school buses, micros, trucks and cars arrived in a slow but steady stream, kicking up dust as they parked nearby.  Youth from El Paisnal handed out white and yellow tissue paper flags, yellow bandanas and posters featuring the faces of the three innocents who were gunned down in this very place 43 years ago.  A small choir of nuns sang hymns next to the Three Crosses monument.  Recorded music played from the back of a decorated pick-up truck.  Every so often I would hear, "Leeeeeeeeeenda!" and a friend would run up to share greetings and a hug.  The meet and greet part of the pilgrimage is the part which really is the most fun. 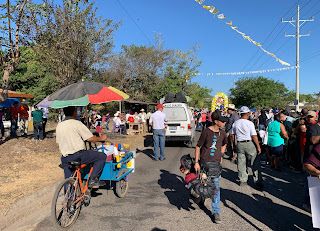 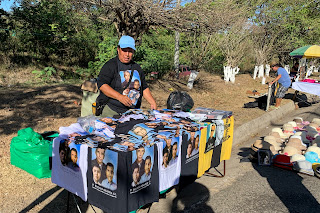 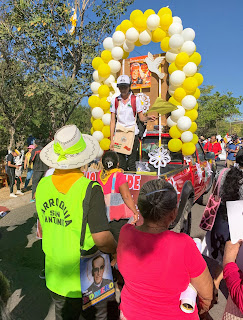 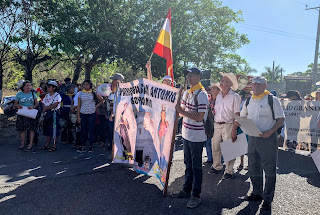 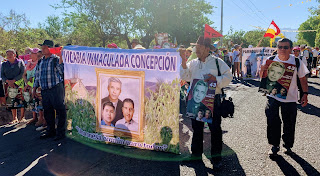 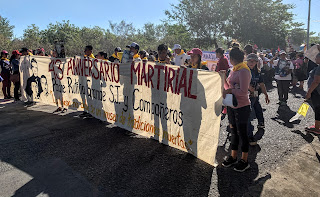 At exactly 9 AM, we began the walk from the Tres Cruces to El Paisnal.  People sang along with the recorded music.  People chatted.  Excerpts from Saint Oscar Romero's sermons were interspersed between the songs, including moments from his final sermon during which the sniper's shot could be   heard.  This is a solemn reminder of the cost of fighting for justice, of why we are marching.  The parade encountered a bit of oncoming traffic which simply had to wait until the long line of pilgrims, trailed by the buses, the micros, the pick-ups and the cars passed by.  We walked past a cane truck, and then a second cane truck.  Every year there is a cane truck, and we laughed about that. 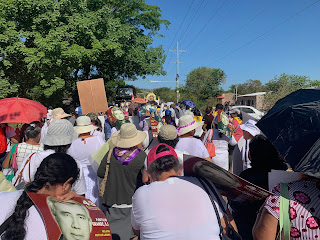 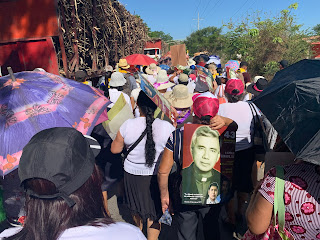 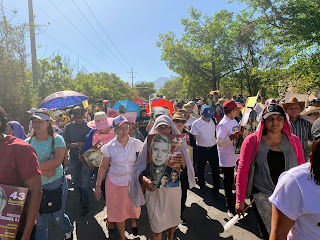 When we arrived in El Paisnal, we stopped by the mayor's office, where the mayor actually greeted us at the door.  One perk of being an international guest is easy access to the bathrooms in the mayor's office.  The balcony at the mayor's office provides a good view of the town.  The ferris wheel and other rides were set up in anticipation of the town's patron saint festival in honor of St. Joseph (March 19).  Every so often someone at the church shot off a couple of fireworks.  In El Salvador, it is not a celebration if there are not fireworks. 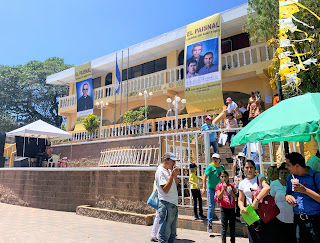 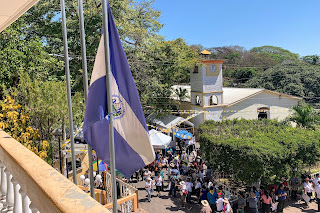 We grabbed some cold beverages, wandered around town, ate pupusas, and chatted with friends.  A woman at the door of the church squirted hand sanitizer into our hands.  The number of people allowed inside the sanctuary of St. Joseph's Catholic Church to pay honor to the 3 martyrs who are buried there was held to 150 at a time, so we actually didn't quite make it inside.  These were precautions taken in the hope of preventing the corona virus pandemic from taking hold in El Salvador.  After a little more wandering, we said our farewells.  I stopped by the stand at the corner to buy a dollar's worth of fresh hot french fries to go - a delicious way to end our morning.

March 12th is a sad remembrance, but also a remembrance filled with hope, and with the music, the food, the balloons, the prayers, the people of the community coming together, I think it is a fitting way in which to honor the memory of a pastor, a teacher, a community organizer - a Father who enjoyed kicking around a soccer ball with kids, visiting families in their homes, and sitting down at the table where all are welcomed. 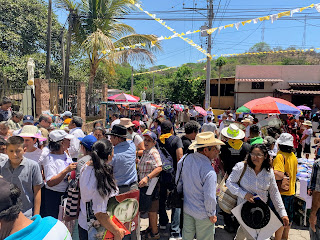 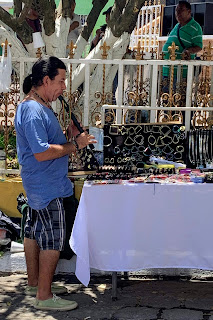 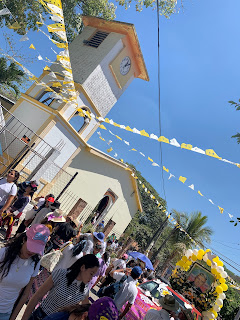 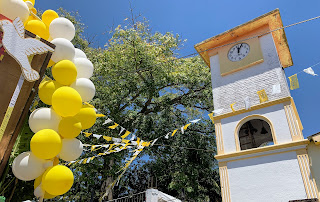 See photos from the 40th Anniversary in a previous blog post.