One day, we went on a mission to the old house. We went to find a basket - Enma's basket.

No one was currently living in the house. Enma's daughter had left some years before to keep her young son safe from gang activity.  He was only seven, but the big boys were already trying to manipulate him, to recruit him to spy. The young mom abandoned their home, taking their clothes and what they could carry. After some difficult times, the daughter and her son settled safely in the countryside.

When she left, the daughter had been unable to take the basket. She hoped she would find it in the house. Her father and her younger sister sometimes stayed there. The daughter unlocked the door. Lots of memories rushed into the daughter's heart, and my heart too, like the water that once rushed into the home when it was a simple lean-to snugged up against the dirt hillside. In those days, Enma and her husband would gather up all their belongings and pile them onto the beds, along with their two little girls, hoping the rain would not wash them to the bottom of the hill. The annual rainy season brought a cycle of shoveling mud, drying everything out and waiting for the next storm.

Enma was a small woman, maybe four and a half feet tall. She was publicly quiet and shy. She could not read or write. Yet, inside that little package, her daughter says, was a fighter - a pure luchadora. During the Salvadoran civil war, Enma fought with the guerrillas against oppression of the campesinos, carrying and using a weapon almost as big as she was. Her portrait is included in mural of heroes at a museum in the mountains.

The trauma of the war and extreme poverty left scars on both Enma and her husband. But Enma was a fighter, and her entrepreneurial skills helped her to support her family. Enma bought fruit at the central market or the north country and prepared it as "tuti fruti" - a fancy fruit salad with honey drizzled on top. She sold it in the streets and on the buses. She bought and sold other things too, but is most remembered for tuti fruti. I met Enma when she invited the first delegation of visitors from her sister church to the dirt space in front of her home, where we gathered at an impromptu table, and she served us tuti fruti. I remember the little girls giggling with us because tuti fruti is a funny name.

I am not sure how Enma got connected to the Lutheran Church, but that connection enabled her to receive that small plot in the community where she and her husband built their lean-to.  A housing project, sponsored by the sister church after the 2001 earthquakes in El Salvador, helped the family to build a concrete block house, finally eliminating the annual mudslides into the home. The girls grew up, participating in all the church activities and in the scholarship program for school.

The house was dusty. Enma's daughter found the basket, hanging on a nail on the back wall, just where she had left it. "This is the only remembrance I have of my mother," said her daughter, "other than the stories." She recalled her mother carrying that basket every day, every single day, selling to make money for a little bit of clothes or some shoes. We remembered the last time Enma made tuti fruti. She was still young, somewhat older than forty, and was dying of cancer. Her daughter cared for Enma throughout her illness, and was with her when she died. Enma never spoke about her time in the war or the hard times picking coffee while raising babies or scraping by selling in the streets. She was not shy about asking for help for her kids. She was a fighter - a pure luchadora, as is her daughter.

"The stories are your treasure," I told her and asked if I could take a photo of the daughter holding Enma's basket, to have as a memory for herself and her son.  The first picture brought tears.  We cried for a bit, and she asked me to take another photo. She smiled.

Today, in honor of el Día Internacional de la Mujer (the International Day of the Woman), we remember Enma, a pure luchadora, and all the women who use their wits, their energy, their creativity and their passion to build lives for themselves and their families. 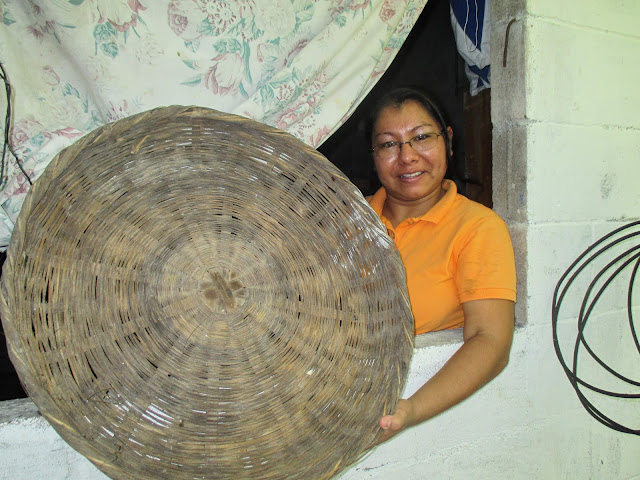 This story and the photo are shared with permission from the daughter.
Biography Civil War Relationships Women