Together Again in El Paisnal

El Salvador shut down hard in March 2020. We made it out of the country just as the airport was closing down. We returned to the US and began a quarantine that would last much longer than anyone anticipated.

On March 12, 2020, we walked in the remembrance march from Las 3 Cruces (the 3 crosses) to El Paisnal, in remembrance of the murders of Father Rutilio Grande, Nelson Rutilio Lemus and Manuel Solórzano.  At that time, the faithful gathered in anticipation of the beatification of Father Rutilio. As always, it was a day filled with sunshine, music, flags, hats, friends, hugs, banners and stories.  Whenever we walk the 2-mile route together with friends, of course there are stories. 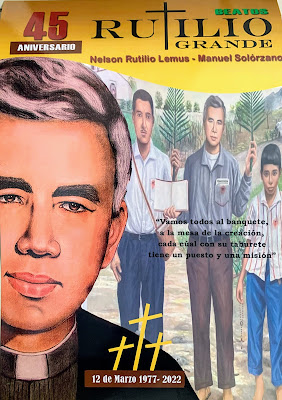 We try to keep our personal tradition of participating in this annual pilgrimage, in part because our Lutheran Synod in Milwaukee has a shared history of accompaniment with Comunidad Rutilio Grande. There are 5 Salvadoran Lutheran Church communities in the vicinity of El Paisnal, and often, folks from these churches participate in the ecumenical gathering at Las 3 Cruces.  This year, we went with Pastor Francisco from our local Salvadoran Lutheran congregation.

It was a very hot, sunny afternoon. We tramped up the hill from the parking field into the center of El Paisnal to make a few stops and meander around town. Our first stop was inside the sanctuary of Parroquia San José, El Paisnal (St. Joseph's parish) to pay our respects at the newly designed burial place of Father Rutilio, Nelson Rutilio and Manuel, who were beatified by the Roman Catholic Church on January 22, 2022. 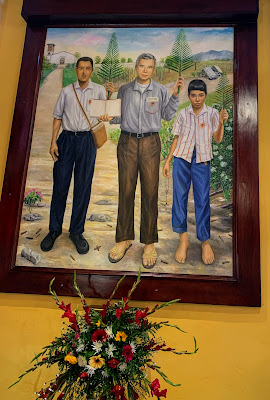 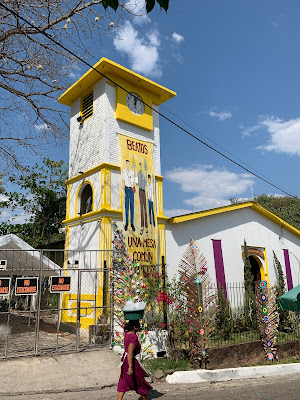 After our visit indoors, we wandered around the plaza in front of the mayor's office. All of the fences and gates were closed and locked up and some pretty seriously-faced guards were positioned on the veranda of the municipal building.  This was a noted change from the past, when the mayor's office was open to the public and personnel intentionally welcomed tourists. (Note: Control of the local government has shifted from the FMLN to Nuevas Ideas - not a commentary, just a fact.)
We stopped at the corner Neveria for ice cream cones and a rest in the shade before commencing our trek out of town to Las 3 Cruces.  Our plan was to walk out the 2 miles and then march back toward town with the crowd.  We were just past the edge of the pueblo when the police pulled up beside us and asked if we were walking to Las 3 Cruces.  I said that indeed we were. Well, guess what? They offered us a ride, and as we prepared to hop into the back of their pick-up, they clambered out of the cab and invited us inside. We did get a few funny looks as we hopped out of the police truck at the edge of the crowd. We were very grateful for the ride, because it was seriously hot.
Upon our arrival we were handed flags and posters.  We joined in singing Vamos Todos al Banquete and kept our eyes open for friends. All of a sudden, I was enveloped in a super big bear hug.  Seriously! she would not let go.  Of course, it could not have been anyone other than La Abuela Mágica. When she and the other grandma and their pastor, Gloria, were done hugging me, everyone within hearing distance was treated to a complete retelling of our adventure climbing the mountain, and how the two of us were the first to arrive at the top (a true story.) The last time The Magic Grandmas were together was on March 12, 2020. Hence, the bear hug. Pure joy of seeing beloved friends after a long separation is one of the gifts Father Rutilio brings to those who walk in his memory.  He walked among the people.
Our next reunion was a surprise.  Benedicto and his sister, from our local Lutheran church community, joined our little group. "We always come," they said.  I didn't remember seeing them in previous years, and they were pretty surprised to see us as well.  The MC for the event then announced the arrival of the Catholic parish from San José Las Flores in Toncaca. More friends!
One more song and it was time to get moving. As we began the walk back to El Paisnal, I asked Pastor Francisco if he ever participated in these anniversary walks. He said he did in the early years. He is originally from Chalatenango. He told me Padre Rutilio's team would come up to his town and do some teaching. One time, Padre Rutilio came himself. Francisco remembered getting scolded by Padre Rutilio for talking too much, so he personally remembers him as a little bit strict, at least as a teacher.
We were well into the march when two women from Comunidad Rutilio Grande finally found us.  They did not have a big banner nor a group this year, which disappointed them a little bit.  As we walked, Maura lamented that the young generation really doesn't know the story of Padre Rutilio Grande or why her community chose his name as the name for the community. It surprised me a little bit that she mentioned this, because if any community seems to do a good job of telling stories, Comunidad Rutilio Grande does.  Her dream is to be able to come to the US for a visit to share stories with the young people in the sister churches and for us to come and share stories of our times together with young people in her community.
We came to the end of our walk together. Her feet were tired. My feet were tired.  We both have some gray hair. She looked at me and said, "Like you said, history and tradition will not be carried forward unless we who are older tell the stories to the young generation" and make them relevant to the realities of today.
Maybe, dear friends, we will meet again soon.  If not, we will gather at Las 3 Cruces on March 12, 2023. Don't forget your hats, your water, your banners, and your kids.
Faith Fiestas History Relationships Salvadoran Lutheran Church