March 27, 2022
We got up at 4 AM so we could be in the community for the celebration in the madrugada (the wee hours of the morning). Most of the people who care about this tradition are grandparents now.  Well, we are too. We arrived at about 5:30. The light was on inside the church.  The streets were quiet except for the harmonies of the chicharras, the roosters and the songbirds waking in the trees. 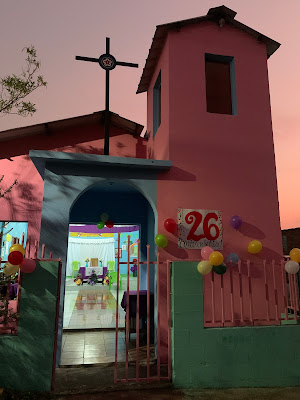 Back in the day, the first fireworks exploded over ramshackle rooftops at 1 AM and 2 AM, and by 3 AM, people would begin to gather at the church. The women would have been up all night stirring the chuco and the men would start making speeches interspersed with traditional music pushed into the community over a loudspeaker. By 5 AM, the party was alive with children squealing at the fireworks and sparklers. Families would huddle together in the cool morning air, dunking their pan francés into their cups of warm chuco. The pastor would pray and lead everyone in singing Las Mañanitas (the traditional birthday song). Someone would tell the story of how the community was founded, how they marched up the hill from the hacienda and planted the iron cross. Testimonies would go on for a while. Eventually folks had to get ready for work, though few people had scheduled employment back then.
Now, March 24th is a work day. It's a school day. It's a little more difficult to convince folks to get up in the madrugada. As the chicharras sang and the sun came up over the distant hills, the sky grew pink above the iron cross.  The dogs started woofing. Our little group of grandparents lit up the early morning sky with fireworks and clapping and cries of "¡Buenos días, Los Héroes! ¡Feliz aniversario! Happy 26th anniversary!" We sang, we prayed, we told stories.  The pastor held a candle with the image of Saint Oscar Romero, a reminder that the community's foundation was laid in the faithfulness, the legacy and the example of Monseñor Romero and other heroes and martyrs who fought against injustice and oppression. We passed the glowing candle from person to person, each one sharing a testimony of the light of God in the past and present story of the community. 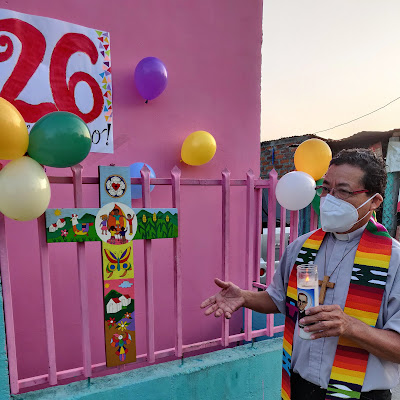 This year, the kindergarten, first and second graders from the community school were invited to come up to the church to share in the tradition of the chuco y pan francés.  A little line of little ones marched up the hill at about 7:30 AM. Of course they gathered in front of the church for a photo, which also gave time for a little story-telling about why the community celebrates this day. Maybe, someday, these little ones will light the fireworks and stir the chuco.  The grandparents hope that they will. 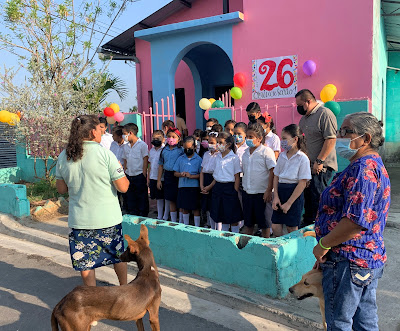 Back in the day, it was possible for a group from the community to pile into a couple of vehicles and make their way to Divina Providencia Hospital and participate in the march through the streets of San Salvador in memory of the life and testimony of Monseñor Oscar Romero, Saint Romero of America, who was assassinated on March 24, 1980. Now, the complications of life and schedules and traffic congestion make participation in the march difficult for most families. 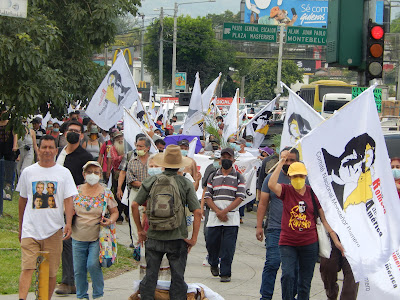 This year, an ecumenical group of churches and organizations worked with the Roman Catholic church to create reflection stations along the marching route from Divina Providencia to the Metropolitan Cathedral.  There were fewer marchers than in the past, likely for some of the same reasons that the Los Héroes anniversary celebration was small. There were also very few international participants. We participated in a segment of the march and in the reflection stations at Salvador del Mundo and Parque Cuscatlán. The Lutheran Church had a solid little group of marchers (yes, all grandparents). It's always a joy to find friendly faces in a crowd, and to walk and chat together. Our pastor was a leader at the stop at Parque Cuscatlán. 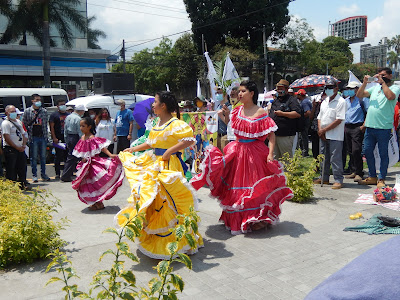 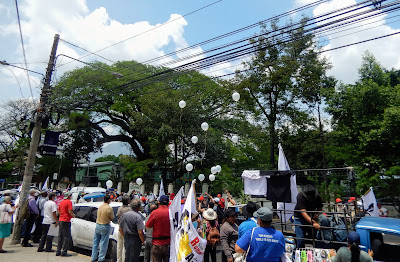 In El Salvador, traditions from generations long past, like welcoming the song of the chicharras and drinking chuco, are woven into memorials of the more recent past - into remembrances born out of conflict and violence.  Several times during the early morning celebration, one of the grandmas threw up her fist and called out "siempre adelante" (always ahead - like keep going forward).  The hope that she and others had when their community was founded and named in honor of those who fought to change unjust systems is still strong. During the Romero march, there was also a collection of phrases that marchers were encouraged to repeat, and many of them were not complimentary to the current national government. One legacy of Oscar Romero and others who died fighting against unjust systems is hope. As grandparents celebrate, honor, testify and teach, they hope the young ones will be better, will do better and will march forward, siempre adelante. And make chuco. 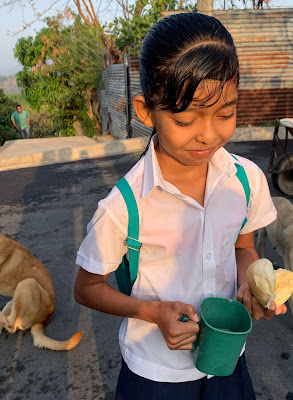