Vacation Week: A Walk in Nahuizalco

After a couple of days exploring Ataco and a bit of the surrounding hills, we drove down the Ruta de las Flores (the Route of the Flowers) to the southern edge of the Apaneca-Ilamatepec mountain range, to the town of Nahuizalco.

Nahuizalco is known in El Salvador as a center for indigenous culture and one of the few places where the Pipil language, Nahuat, is preserved. The city was founded as a settlement by Pipil families, and the name "Nahuizalco" can be understood to mean "four Izalcos." One name origin story tells of four families from nearby Izalco (located at the southwest base of the Izalco volcano) that migrated west to found a new settlement. Another theory speculates that at one time, the population of Nahuizalco was four times as large as that of Izalco. Investigations indicate that Izalco was populated by one of the Pipil groups that arrived in El Salvador between 900 and 1500 CE. The name "Izalco" contains the root words for obsidian, sand and houses.

Today, the city of Nahuizalco and surrounding area is home to about 50,000 people. It is a center for artisans who specialize in creating weavings from natural fibers and items made from tule, wicker, wood and cotton. On the main roads outside of town, artisan shops featuring these products give an example of what might be found in the city's markets. 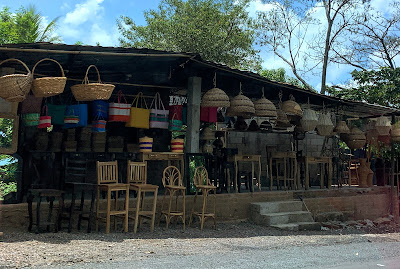 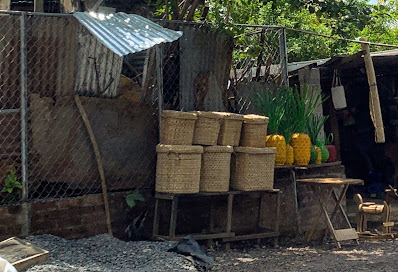 We visited Nahuizalco during the day, and the street market was filled with families shopping for fresh foods and basic things needed in the home. Nahuizalco also hosts a famous night market. The area around the central plaza is lit with candles and artisans sell their woven creations, as well as items made from wood and wicker.

We walked through the market street to the central square. Nahuizalco is hot, and with the sun shining brightly, the curious wanderer should definitely have a hat or umbrella and carry water. Nahuizalco is laid out in the traditional colonial pattern, with the mayor's offices and the parish church flanking the town's central plaza. Tucked away in the corner of the square, next to the church, we found the Casa Cultural. When in a new town, it's always a good idea to visit the Casa Cultural. A very kind docent welcomed us in, offered us coffee, and told us a little bit about the small collection of items inside.
The cultural house has a little exhibition showing the process of making petates (woven mats) and other objects from tule. The tule plant is in the rush family, and produces leaves like palm stalks, which can be ripped into uniform strips for weaving.  Petate mats, which can easily be rolled up, are used by families in their homes or when they sleep outdoors, by military personnel, fishermen, and in prisons. This weaving technique is used to make baskets, storage boxes, purses, hats and clothing.

After our visit to the Casa Cultural, we explored the sanctuary of St. John the Baptist Roman Catholic Church. The building dates back to 1660 CE and seems to have undergone some reconstruction. The current cornerstone simply states the origin date as before 1800 CE. The church suffered some damage during the 2001 earthquakes and has been repaired. 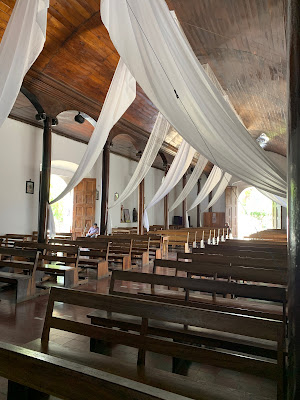