July 22, 2010
We have been walking with our sister church community for more than 12 years. We've walked together in baptism and funeral, hurricane and earthquake, wedding and birthday, teaching and learning, Bible study and worship, peace and violence. And in 12 years, children have grown up.

During his very first visit to our church in the US, our Salvadoran sister pastor spoke about the little ones. I can still picture him motioning with his hand to show the heights of two little boys, Marvin and Ernesto (name changed). These little guys were the present and the future of the community, members of one of the first families to settle in that rag-tag community of in-country war refugees back in 1996. Part of a big family, led by a little and sturdy mom.

These boys liked mischief and Sunday School and playing soccer with their friends and their pastor. Marvin liked to play bus driver. When he got to be too much for his mom to handle, a neighbor gentleman took him under his wing, and let him ride around with him as he drove in the city for his job. Marvin grew up. He stayed with his grandma and went to school. He eventually took a job as the fare-taker on a micro-bus in order to help support his family. Marvin was tragically murdered.

How does a family cope with such horrible loss and violence? How does a little brother deal with his grieving mom and sisters and brothers? with the responsibility of suddenly being the man of the family? with temptations of the streets? with lack of hope?

We have walked with Ernesto in school, out of school, in the streets, playing soccer, coaching younger soccer players, being hungry, joining a gang. It was hard to watch him - tall, too thin, avoiding us - when in our minds he was still that little one, beloved by his pastor, beloved by his sister church, prayed for by many.

Because his pastor stuck with him, so did the community. 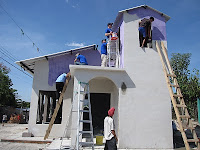 ked together to build a new church in the community. The work groups were organized by the women, who lead Bible studies in different parts of the neighborhood. The women invited Ernesto to work on building the church. After a couple of months, the project was finished. There was one worker who was there every single day - Ernesto.

Near the end of the project, we gathered together to celebrate and dedicate the new church. Ernesto was glad to be with us. He was smiling, laughing, working alongside his old friends. He said that he had learned how to do masonry, welding, painting, electrical work. He had job offers to do construction. He was hopeful.

We are hopeful not only for Ernesto, but for a community which struggles with violence and gang rivalries in it and around it. We are hopeful that the wisdom of the women, who called for the church to be a place of peace where all are welcome will spread into the homes and the streets. We are hopeful that our beloved little boys will have the chance to grow up.
Biography God at Work Kids