Off the Beaten Path: Hanging Out in the Park 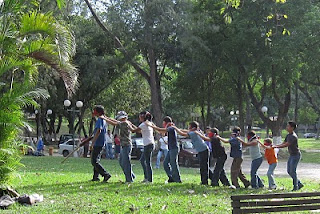 Recently, I was hanging out in Parque Cuscatlán, and saw a group of explorers doing a trust walk. It was great to see the young people working as a team, and to see the older ones running the activity for the younger ones. It was an afternoon of fun and group-building for the kids - something that stands out in contrast to the challenging afternoons of survival that lots of young people face.

Seeing these kids reminded me of one of my first experiences in El Salvador. We were marching through the streets of San Salvador with hundreds of people in a pilgrimage to honor the anniversary of Salvadoran Lutheran Church and to bring attention to the issue of violence against children. Boy Scouts and Explorers were helping out along the route. Their job was to keep the crowd contained on the street, which they skillfully did as they passed long boundary ropes from scout to scout. (Picture a giant inch-worm moving along each side of the crowd.) These kids were trustworthy, courteous, kind, helpful and friendly - qualities which scouts around the world try to incorporate into their lives.

Parque Cuscatlán was filled with families having fun and sharing picnics. One family had a pretty ingenious set-up with a hammock in the back of their pick-up. There was a drum group performing at one end of the park.

The reflective and more sobering aspect of the park is the memorial wall, "Monument to Memory and Truth" - a granite wall which lists the names of about 25,000 civilians who were killed or lost during the Civil War. On this particular day, I was more focused on the life and the laughter in the park, and not so much on the wall.

And, because often the wall is the focus of our delegation visits to the park, we have never thought to visit the Salarrué National Exhibit Hall, which is located under the big white staircase. The garden outside of the hall is a great place to sit and listen to the birds or to watch pick-up soccer and basketball games. It was a real treat to see the unique art installations inside, and, I have to confess, the air conditioning felt really good after a long hot walk.

Hanging out in the park on a hot afternoon. I recommend it. 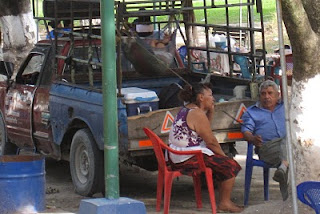 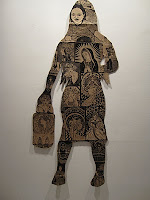 Delegations Off the Beaten Path