August 30, 2010
How do we judge the success of a scholarship program?

I think for those of us who are all about education, we might easily say that any education which young people receive will not be wasted. I believe this.

Yet, we have dreams for our children, don't we? We want our kids to do well in school, to love learning, to read well, to graduate from high school, to go to college, to be able to provide for themselves and their families, to be valuable assets to their communities.

November is graduation month in El Salvador, and last November, we were invited to two high school graduation celebrations for two of the youth in the scholarship program. The ceremonies were at different schools and on the same day. 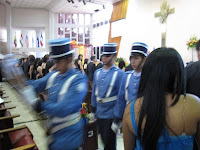 y had limited seating. My husband and I were given two precious invitations, which meant that the graduate's brother and sister could not come. The family felt that it was a great honor to have international guests at the ceremony, and we were very humbled by this generous invitation. The ceremony began with the graduates being ushered in - boys in dark suits and girls in mostly black dresses and too-high heels. There was a color guard, drums, the singing of the national anthem. And then, because the school is run by an Assembly of 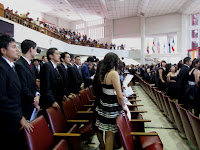 God church, there were lively praise songs, with a contemporary band and a very charismatic and talented singing pastor. It was great to see the students enjoying this time of praise, with words projected on screen and hands held high. Some of the parents and grandparents were clearly a little out of their element, but I loved it! The school showcased some of the student musical talent with a performance by their traditional folk band. Cameras were technically not allowed, so parents and international guests alike did the best they could to sneak a few clicks of the camera in when they could.

After the ceremony we gathered for photos with the family and hugs all around. The graduate has begun his studies at the university, and continues to receive support through the scholarship program as well as through work/study and scholarship efforts which he earned through hard work.

After a quick l

unch with the family we were on to the next ceremony. This one was at a Catholic high school, and included the procession, the national anthem, some words from the administration, but no praise songs. The boys were in dark suits and the girls in black graduation robes. In the school's wide open courtyard there was plenty of space for parents to run up and down with cameras and families to clap with glee when their graduates walked across 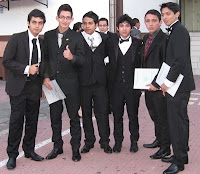 the stage. The ceremony was much shorter than the morning, but included a very touching moment when students gave honor to a beloved teacher. At the end, a big load of balloons bearing the school colors was released into the air, and friends gathered for photos and hugs.

The graduation party for the second ceremony was held at the Intercontinental hotel. This is a swanky location, and very costly for the families. Most of the families could not really afford this, but the mom that we were with said that somehow families save or borrow or get the money from other family 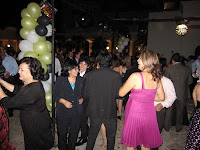 members in order to attend. She did not like it because the pressure on the kids to attend was very strong. Whether or not the location and cost were appropriate, the party was extremely fun for the graduates and their families. The dinner was great and the dance afterward was very fun. With a DJ and a fun mix of North American dance classics like YMCA and Salvadoran salsa, parents and kids danced late into the night.

The second high school graduate has begun his university studies and continues to receive support through the scholarship program. He has worked hard to earn additional scholarships in order to attend his "dream school" so that he will graduate with a business degree which will be well respected.

Graduations - in one day of grand ceremony we experienced the joy which two young men shared with their families and with us as they proudly completed their high school studies. Graduation from high school is definitely one measure of success for a scholarship program. Doors are open to these two young men, and to the 16 others in our sister church program who are attending university, which would have been closed without those high school diplomas. And just as we wish for our own children the prospect of continued joy in learning and the promise of good employment, so we wish these things for our scholarship children.

To be continued...
Education Kids Relationships