Wear it til it Breaks

If someone in El Salvador gives me a bracelet, I wear it until it breaks. Well, I actually do more than just wear it. I think about the one who gave me the bracelet whenever it catches my eye, and I try to pray for the giver at least once during each day. And when a bracelet finally breaks, I feel really sad for a bit.

, I am wearing three bracelets.

One has a pattern of 4 orange beads which alternate with 2 dull white beads which used to be pink. The beads are strung on sturdy fish line and the clasp is a little silver screw-together type. It was a gift from Maria - a little expression of thanks after she and her daughters gave me a tour of her home. It was a warm and wonderful visit, with the girls showing me their bed and their treasures. It was a difficult visit as Maria pulled aside the old bed spring gate, ducked under a neighbor's electric line, and showed me the holes in the roof where the wind-caught tin was bent. I couldn't help being reminded of an old fort that I had constructed as a kid, with an old bed spring wall and scraps of wood. I could not imagine living in Maria's home. Three years later, the family still lives in the little house, the girls are studying as part of a scholarship program that our church helps to facilitate, and the bracelet reminds me to pray for mom and daughters.

bracelet on my wrist is from Tanzania. We are so blessed by our relationships in El Salvador that our congregation has continued to reach across borders and is building a sister church relationship in Tanzania. We are all connected to one another as global brothers and sisters, and so my bracelet rule was expanded when I purchased some traditional Masai jewelry from a women's cooperative. As Lutherans, the Masai women we met have embraced Christian beliefs and also keep some tribal customs, such as multiple wives for one husband. They have been ostracized by the greater tribe for abandoning their ancient religion, and so are limited in their ability to support themselves. By selling jewelry, the women can share their artistic gifts and earn money to support their families.

The third bracelet that I am wearing is made of knotted yarn. It was made and given to me by a woman in Managua, Nicaragua. She is a member of the women's ministry group at her church, and sat next to me as we shared chicken salad on white bread sandwiches. She just wanted to be my friend, and so she gifted me with the little aqua, white and orange braided bracelet which she had in her apron pocket. I have only worn this one for a few weeks ... it replaced another which I had worn for more than 3 years and which I had to cut off.

The bracelet which was cut was made by a group of teenage boys. It was an intricate weave of red and white string. Even though it was faded and dingy, it was special because it came from the boys "over by the school" - boys who spend their free time kicking around a soccer ball or flying kites or getting into a bit of trouble. One day, wh 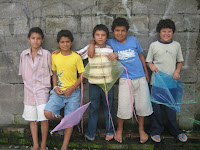 en I was walking alone near the soccer field, the boys stopped playing to see what I was up to. I asked for a photo because they were so guapo, and they posed for many. At the end of the chat and photo shoot, one of the boys pulled the bracelet off of his own wrist and tied it onto mine. He told me they had learned to make these in youth group. I rarely see these boys, and pray every day that they are in school and out of gangs. A few weeks ago, I got some poison-ivy nasty thing on my arm and had to cut the bracelet off. It surprised me a little to feel so sad about ending my time with that bracelet. I prayed extra hard for the boys and quickly grabbed another bracelet from my treasure box - the yarn from Nicaragua, which I'll wear until it breaks.