Off the Beaten Path: Puerto Parada 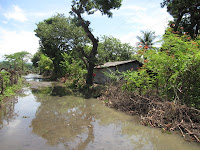 We were in Usulutan for the night and the pastor led us out to the church in Puerto Parada in the morning. The paved road became dirt and the dirt became mud and the mud became puddles and the puddles became the river. And all along the way, families were living in the water.

The river broke through the levy in June after tropical storm Agatha rained down, and the puddle lakes and streams left behind are stagnant breeding grounds for mosquitoes and disease. Released from its confines, the river now runs through three communities which remain evacuated, displacing more than 700 families. Some families refused to leave or, having no place to go, are surviving by scavenging what they can from the mud-covered corn and cane fields and by fishing with small nets.

We couldn't make it to the community on this route, so we turned around and took the other road in. We stopped at the church and heard a little bit more about the history and current life in the community, and then walked down to a shrimp-farming project which is run by the community. The shrimp harvest will begin in a week. Fortunately, the shrimp are abundant (they were not affected by the flood because "they LIKE the water"). This sign of hope brings smiles and animation to the faces of the people who live here.

As we walked our way out of the community, we greeting moms making tortillas, gr 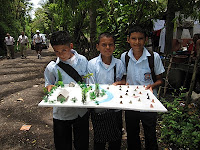 andmas picking over small bowls of beans, and lots of children. It was midday, so we were greeted by the young children who were coming home from school, and the older children who were on their way with projects and homework in hand. About 50% of the children in this community do not attend school, because their families rely on them to gather life from the sea which gives life to their families.

There were so many sad stories, and so many beautiful smiles. As we walked in the oppressive heat and humidity, it was hard to imagine living in this place with the mud, the mosquitoes, the ever-present danger of flooding, the lack of sanitation and the unsafe drinking water. How spoiled we are to hop into our air-conditioned vehicle and be able to drive out, beyond the water, to our dry and clean home where we can wash our feet and walk beyond the mud.
Current Events Off the Beaten Path