Tales of Greasy and Grubby - Afternoon with the Queen

September 21, 2010
One day, Greasy and Grubby were hosted by the queen.

We walked up to the edge of the yard. "Buenas tardes, con permiso?" "Good afternoon, can we come in?"

We were greeted by an exuberantly smiling grandmother. Moving slowly but with a bustle of excitement at having company, she pulled 3 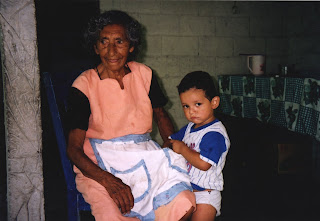 chairs together, chirping "Sit down, sit down."

A little guy soon sidled up to our hostess, "My grandson," she said, "I am taking care of him."
He was shy, and as we took turns introducing ourselves and telling a little bit about our families and our lives, he played peek with his big brown eyes, hiding every now and then behind his grandmother's arm.

After a little conversation, our hostess smiled proudly and revealed a secret, "I am the queen." She told us how she had been elected queen, with a sash and flowers and a grand parade. (At the time we didn't know anything about the tradition of the Day of the Grandma Queens.)

Soon the Queen rose and walked over to her pila (the open concrete cistern where water is stored for cooking and washing). She hastily scrubbed out two tall glasses, and then filled them with water and freshly squeezed lemon. She graciously presented Greasy and Grubby with the fresh lemonade.

We were honored to be served by the Queen. 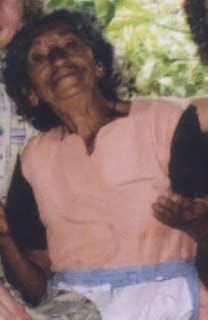 And, this was the moment of origin of the phrase, "Pray it down." When you know you will get sick from what you have been served, yet in gratitude and humility you have no choice but to eat or drink, you pray it down.

And this was not just a slogan for a toast. Greasy and Grubby literally prayed while enjoying every swallow of that delicious fresh lemonade, lovingly made with the water of a queen.

Apparently God answers the prayers of faithful lemonade drinkers -- Greasy and Grubby did not get sick, and have wonderful memories of an afternoon in the home of the Queen.
Lessons Tales of Greasy and Grubby