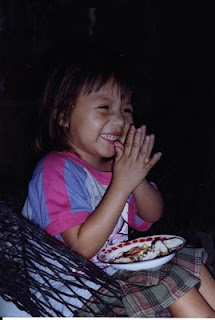 One day, quite a while back, Greasy and Grubby were invited to Vanessa's Day of Fun.

We were staying in the home of one of our friends in our sister community. At the time, four generations of mostly women and girls lived there, in just a couple of very dark small rooms. At night, the family would take a couple of taper candles, drip wax onto a surface and stick the candles to the wax to provide a bit of light for us so that we could talk well into the night. The night was sometimes a challenge with creepy crawlies, but we had a bed with a mattress, so we could avoid the walls and the floor and sleep pretty well.

One morning, we woke up and it was Vanessa's Dia de Divertido - Day of fun.

Vanessa was pretty little at the time. Her mom's only child. Her mom was young and beautiful, inside and out. She still is. We have been friends for a long time, and Vanessa's Day of Fun was something she wanted to do for us. We cleaned up and gussied up (as best as Greasy and Grubby can ever do with a bucket shower) and headed to the bus stop. We took a micro into Apopa and hopped out near a little mall. We had to cross the street, and our friend was so concerned for our safety that she waited for a really big break in traffic, grabbed our elbows while carrying Vanessa and said, "Run!" What a comical site we were!

Outside of the stores, there was a row of colorful kid-sized trucks and cars - the kind that you pop a coin into and they give you a little rock and roll ride. Vanessa climbed into each one, and we took turns squeezing in beside her. Vanessa's mom popped a couple of colones into a read and yellow coupe for a brief ride filled with giggles and hand claps.

Then we went to the ice cream shop. Vanessa's mom bought an ice cream cone for each of us. We sat at a table and chatted the afternoon away. Then it was time to go to the bus stop (that main bus stop in Apopa is still beyond my ability to figure out) and ride back home. 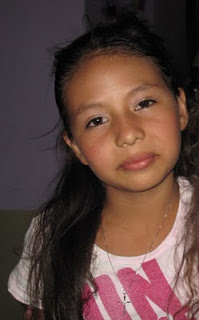 Years have passed since Vanessa's day of fun. Vanessa's dad left. Her uncle tried to get to the US. He was arrested and sought asylum, but after a few months in prison in Texas was deported. The family has struggled economically. The girls have scholarships and all go to school. The girls work during vacation - in chicken factories, slaughtering chickens before Christmas. Vanessa's grandpa makes jewelry boxes to sell at the market. Her aunt's boyfriend was dragged out of the house and murdered by gang members - not the first time a family member had been killed. Vanessa recently celebrated her first communion. She is smart as can be and does very well in school. She and her mom, her step-dad and her younger siblings recently moved into their own house. Vanessa's great-grandma passed away, after a long life.

After its own long life, Greasy's bracelet finally broke one day, with beads scattered across the floor. Mine was on the verge of breaking, so I put it away. Yesterday I brought it out again. I retied the string and pulled it on. It is very grubby and not too sturdy. It reminds me that in the midst of whatever hard things are happening in life, it is good to have a day of fun. I will wear it til it breaks.

(For those of you following my bracelet stories...mysteriously the orange and pink beaded bracelet from Maria disappeared off of my wrist during a hard day of church work. I'm sure the clasp simply came undone. I hope some little kid found it and is enjoying it as much as I did over the last 3 years.)
Relationships Tales of Greasy and Grubby