October 01, 2010
Sometimes, you start with a little idea and then it gets bigger and then you find yourself trying to get into the Presidential House in San Salvador for the President's signature and making jokes about iguanas.

First there was a book drive. For his Eagle scout project my kid decided to build a library in our sister church community - not a library of bricks and mortar (although that still is in the dream file) but a library of books. So, lots of solicitation and book fairs and drives later, the scouts packed up over 1000 Spanish books, each with it's own plastic bag (rainy season protection), organized by level and neatly stowed in labeled boxes.

Early on, the question arose: how do the books get to El Salvador?

The answer: a shipping container! Great idea. A generous donor supplied the container. But 1000 books filled only a pallet and a half. So the questions arose: what else was needed? what could we send?

The answer: micro-business support. We gathered stuff for sewing cooperatives and wood-working shops - from machines and power tools to tons (literally) of fabric and hand tools. Along the way we received desks for schools, wheel chairs, and a couple of row boats to help out with water farms.

Obviously you cannot store all this stuff in a church. We needed a warehouse. And a generous donor provided that too, along with pallets and loading equipment and shrink wrap.

It was quite an adventure in inventorying and learning about shipping and packing. A couple of funny memories stand out like one of my kids hollering out, "Palletize me, Captain!" to his brother as he drove the forklift over to a pallet. Or carefully packing up my mom's cabinet sewing machine, and my grandma's, among many other beloved, sturdy machines. Or the random monarch butterfly that landed on my friend's sleeve while we were in the warehouse, exhausted from packing, and the feeling we had that it was "a good sign." Or the wise helper who thought to bring plywood to secure at the rear of the load inside the truck doors to accommodate for load shift. In the end, we all signed that plywood and shut the truck doors. The driver asked us if we had a seal. We didn't even know what that was, so I followed the truck down the highway to a stop where he purchased the seal and we secured it together. Then I waved good-bye to a year and a half of work.

During the next couple of weeks, thoughts of that load of books and hope crept into our minds as we went about our busy lives. Now it's in Mississippi. Now it's on a boat. Now it's in Guatemala. We called it, "The Container of Hope."

We got word when it was in Customs. And there it sat. Customs is the place where patience is tested.

Ultimately, I got onto a plane with my husband, my kid and a friend and we went to San Salvador and right to customs -- Las Aduanas. We couldn't get in, but they did let our advocates from El Salvador go in to verify that the container was there and that the seal had not been broken. The four of us who were left outside of the aduanas had a lot of empty time. This is how the jokes about iguanas happened...aduanas...iguanas...you can see the kid humor in this.

Apparently we then needed the President's signature. So, we went from the iguanas to the Presidential House, and did not meet with success, even though, my kid was wearing his scout uniform and looking pitiful.

Well, a trip to El Salvador is always wonderful and we got to spend time with our friends and watch softball and soccer games in our sister community, hoping for a positive word from the officials. We returned home, very unhappy with the iguanas.

The day after we left, our advocates went to the Presidential House, proclaiming that they had turned away a Boy Scout in his uniform (indicating that this was a travesty!), and they obtained the elusive signature. The Container of Hope was released and lots of happy communities rejoiced in their gifts of hope.

Since that time, we have seen clothing and curtains made from recognizable fabric all over El Salvador. We have gone to new communities and seen a familiar table saw hard at work. We have been to our community school library and had kids tell us about the books they have read. 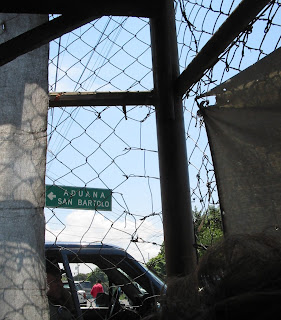 And, just this summer, I was near a shrimp farming pond and there it was - a rowboat! It still had the state license numbers on it, so there was no doubt where it came from. It was used as a rescue vehicle for families after tropical storm Agatha, and it was ready for use to gather the harvest of shrimp.

Over the years, my son has been compared to the boy who shared his lunch - the one from the story of the loaves and the fishes. He is embarrassed by this comparison. He says he just had a little idea about building a library in his sister church community. A little idea? Yes, but he and his idea were blessed with the support of other youth and adults who were willing to get on board with it and make it work.

There are different kinds of miracles, I think. Sometimes, God asks us to roll up our sleeves and get busy. He gives us the strength and the ingenuity and the patience and the humor to do whatever work needs to get done. It is a blessing to be in the work. It is a double blessing to see those loaves and fishes multiplying so long after that work was done. I think that is a miracle.

(and we take back all those bad things we said about the iguanas.)
Adventure God at Work Projects Relationships