October 14, 2010
No hay agua.
No hay agua.
The phrase echos through one house, then another. There's no water.

Our sister community was born in 1996 as a resettlement community of in-country war refugees. Back then, the water came from "the dirty river" - a stream of mostly run-off water that gathered at the bottom of the hill. Or, women could walk an hour to a spring-fed river - a lovely gushing water source during the rainy season, and a trickle through a dry ditch during the dry season. A great place to play and bathe and scrub laundry on the rocks along the stream. 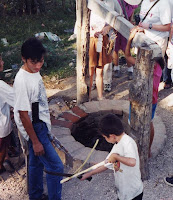 A few more years passed, the community grew, and water sources were placed in the pathways. It didn't take long for the development of a plastic hose protocol. Families hooked hoses up to the street-side spigots according to a self-made schedule, filling their big metal drums and pilas every other day or so. Hoses lined the edges of every pathway, lying in the murky, sudsy run-off water that drained from each home along the way. Leaks were fixed by tying old rags over the holes, and a 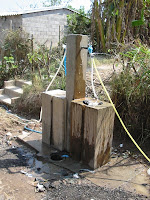 Every now and then the call would ring out, "No hay agua." This usually meant that the electricity was out or the pump was broken, and it was back to hauling water up by hand from the well at the bottom of the hill for a day or so.

Recently, the municipality ran water lines to each home in the community. The source is no longer the shallow well at the bottom of the hill near the dirty river. The source is the deep underground spring, which feeds the clean river where the women gathered water and did their laundry years ago. This source serves not only our sister community, but 2 or 3 other nearby communities as well. Each home has a small concrete access box with a cover at the street. Inside the box is the spigot for the water. The underground lines should help to keep the water cleaner than the old system of hoses in the ditches.

Not too long after the new system was in place, there was a big storm and a mudslide took out the main tank at the spring. "No hay agua." The street sources had been capped, so it was back to hauling water up the hill from the old well. The repairs took a couple of weeks.

Back when the hose-protocol was in place, there was some conversation in the community about families who wasted water or used more than their fair share. There was even a bit of talk about the installation of meters, which was generally seen as a violation of people's basic right to access water. Now that the municipal system is in place, meters will probably not be far behind. Now easier to access, the water is also easier to waste.

I cannot hear the phrase, "No hay agua," without remembering a funny no-water moment with my best friend. It has been a Greasy and Grubby adventure sleeping at the beach, and we were even more greasy and grubby than usual. We found out on short notice that we were invited to a meeting with some church and community leaders in San Salvador, so we asked for 20 minutes to freshen up. Greasy popped into the shower first, and after applying the shampoo...you guessed it...no hay agua. We pooled our meager water bottle drippings to wash out the suds, and off we went to our meeting ... Soapy and Grubby.

The water in San Salvador is often shut off on a regular basis, at least in some neighborhoods. A friend once told me that the most important feature of an apartment is its water reliability and the size of the pila or storage tank for water as a backup when no hay agua.

Usually, no hay agua is a temporary condition, and the water returns. Yet as more and more demands are placed on our water systems, and less and less care is taken to preserve and recycle water well, no hay agua, will not be the announcement of a nuisance, but the call of desperation.
Blog Action Day Current Events Tales of Greasy and Grubby