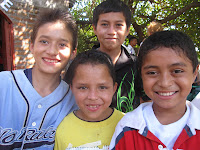 We traveled just northeast of Usulatan and took a dusty drive up to the simple red brick church. The children of the community greeted us one by one with a well-practiced "hello, hello hello..." and a handshake. There were so many children! It was an amazingly warm welcome.

The leaders of the church shared stories about what they do and the history of the community. We asked and answered questions. It was a fun and friendly exchange. Then it was time for lunch. The people of the community had worked together to provide meat, rice, tortillas, salad and Salva Cola for everyone. Often during a first visit, the guests are seated first and eat together at a table while the hosts stand aside, waiting to eat last or to eat the leftovers. Yet in this place, the church leaders announced that at this church, children come first. This was awesome! Many in this particular group work in urban churches in which this is a core value: children come first!

The adults had plenty of time to chat and get to know each other while eighty or more children lined up and received their lunch. Then the adults received their food, with all of us mixed up in line like family. We finished lunch and shared some spontaneous songs in Spanish and English, and some very cute photo moments.

It was during this casual time near the end of our visit that I got to know the woman in the yellow dress. It actually was her little girl who had been quietly carrying around a plastic bowl, sitting beside us and giving an occasional hug who opened the door for conversation. I asked if the little one was the woman's daughter, and the woman made some vocal sounds and nodded her head, yes. I asked how old the little one was and the mom held up three fingers. Using her own form of sign language, Mom communicated that she was a single mom, living with her only child. Her house is right next to the church. The little girl was a good help around the house. She could already make tortillas and help with the laundry.

I don't know Mom's name. I don't know the little one's name -- this little one who is so quiet because she lives in a quiet home, where communication happens with hands and smiles and hugs. 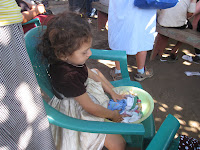 sing prayer was about to begin, I watched as the little girl dumped her two small towels out of the plastic bowl she was holding. She dipped the bowl over the side of the chair, and put the towels back in. Carefully lifting one towel up and down, up and down, then ringing the pretend water from it, she picked up the other towel and did the same. All this time, she had been carrying her laundry. She was just as Mom had described her - a good little helper.
Delegations Kids Relationships