March 22, 2011
Each Mission of Healing begins with a healing worship - a time of baptism, first communion, confirmation and thanksgiving in anticipation of the week of healing to come. In anticipation of this special week, sometimes parents have asked to have their small babies or children baptized. Sometimes older children or teens have asked to receive their first communion and to be confirmed. Each year, the pastor and the community prepare for this special day of celebration and spiritual healing.

This year babies, elementary school students, younger teens, and older teens were welcomed into a new place in their faith journeys...all boys. A couple of groups of friends; a couple of groups of brothers. Each one had managed to find a white shirt of some kind. One little guy had a decorated candle, and one had white gloves and fancy epaulets on his shirt.

The babies were baptized first. One is a miracle baby, whose mom found out that she was pregnant with him just a few days after her oldest son was murdered by carjackers. The other, a treasured blessing and son of one of the doctors who helps every year with the Mission of Healing.

The next to approach the font, one by one, were a family of three brothers. The oldest one wrote these words in a recent letter:

It was a very joyful day in our family, and now we are new people. Now I feel more committed with the church and I try to be better each day. On that Sunday, after worship, we had the opportunity to get together with the delegation that was visiting us. Now I feel happy to have had this great passage in my life and now I am happy to have my new objective to study more and participate more in the activities of the community, guided by our appreciated pastor.

And then a specia 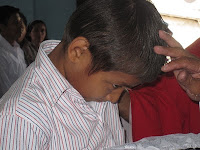 l family was invited forward. The pastor explained that he had been working with the parents and their son who has special needs. I watched as a shy boy came forward; behind him walked his little brother, all smiles. The little brother walked slowly, leading his mom and dad, both of whom are blind.

Where had they come from, this blind couple who had arrived so unexpectedly, just as they had arrived for dinner in the church eleven years ago? Their son, Walter, was baptized, gazing up wide-eyed and listening carefully to the pastor's words. His little brother looked on with a huge and happy grin. Mom and Dad stood close by, listening. 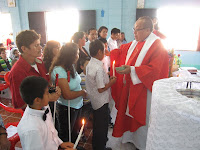 Walter and his parents stood beside the other families as each boy received light for his candle and salt on his tongue and the charge to be a light for the world and salt for the earth.