The Rains Came Down... 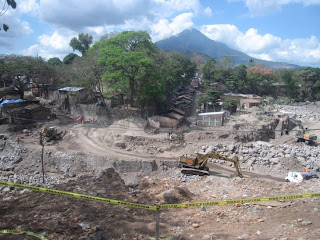 About a year ago, a little group of us visited a community named Guadalupe, which had suffered greatly in the aftermath of tropical storm Ida. I have written a couple of stories about this community which lies near the San Vicente volcano, and every now and then I hear about their continued struggle for permanent housing and recovery.

To get to Guadalupe, we pass through the town of San Vicente, which had also sustained damage during that November 2009 storm when a flood of water came t 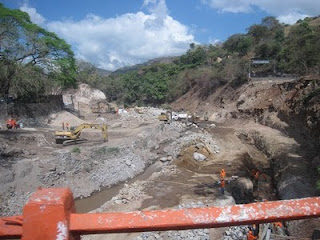 earing down the Accihuapa River, damaging homes and everything else along the banks and nearly taking out the bridge which carries traffic over the river and into town.

A couple of weeks ago we had the opportunity to drive through San Vicente on our way to Usulutan. The bridge is still under repair, and it was good to see that big earth-moving equipment was working near the water's edge. I am not sure what the restoration project will bring about, but it was good to see that some kind of plan was being implemented. The damaged homes and debris had all been removed, and the diggers appeared to be making a wider channel for the water. I snapped a couple of photos and felt hopeful that the next rainy season would not bring destruction and loss of life to the people along this part of the river.

A few days after that visit, something very unexpected occurred. It rained. In San Salvador, in February, it rained. We could smell it coming as we drove through Apopa, then came the thunder and lightning, and students were caught unprepared as the rain tumbled down and soaked them to the skin. Buses created waves which over-topped the concrete barriers between lanes of opposing traffic. Cars stopped as they were confronted by lakes too deep to cross.

The next day, everyone was talking about it. One woman in our sister community with a flair for the dramatic, acted out the situation in her home, "The rain came so fast and our little house is down low and the neighbors are high and so the water came running through the house and the chickens were creating a great noise and it was windy and I thought the roof would blow off and the children were screaming and I thought, 'O Dios mio, it's a hurricane!' But after fifteen or twenty minutes it was over and praise the Lord we were fine."

Later, I bumped into one of the youth group leaders. She had a terrible cold. "The rain," she said. She had been caught at the bus stop in her school uniform, unprepared.

After the tales of the storm were told, two words followed: climate change. "The earth is changing. The plants are changing. We have to change too," said an old farmer friend.

March is typically El Salvador's driest month. Maybe the February rains were a freak occurrence. The people say that winter has come already. It is time to prepare for the rains.

And what about the big machines in the river bed in San Vicente, or the recovery plans in the community of Guadalupe, or the repairs to the dikes near Puerto Parada? It is hard not to worry about so many for whom the words "climate change" are more than just words of concern for future generations but are words which bring fear and loss right now.
Current Events