The Right to Eat

The vegetable lady is at the door with her granddaughter. She comes each day. Today the onions are already gone, but she does have 2 nice cucumbers and a tomato. Julia gives her a couple of dimes and off she goes to pick up an older grandchild from school. Earlier in the day, Julia had acquired a bunch of pitos from a local tree. Pitos are flower buds, like little pods, and you harvest them by cutting bundles of small branches from the tree. Today's lunch will be torta de pito.

We sit down together to clean the pitos. Pull the buds off of the branches, pull the protruding stamens out of the flowers, toss the unused parts onto the dirt for the chickens. We chat and struggle to keep our eyes open in the oppressive midday heat. I wonder who first thought to eat these skinny flower pods which taste a lot like green beans.

Julia knows how to make a lot of different foods from leaves, pods, flowers and fruits which grow in the countryside. Soon it is time to make the tortas: chopped onion, chopped pitos, chopped tomato, egg, shredded meat and probably some other secrets go into the bowl and with a little hand mixing and forming, the tortas (like meatballs) are ready to go into the frying pan. Pretty soon we are sitting at the table together, enjoying the most delicious meatball tortas with tomato gravy and tortillas.

Then it is time to feed 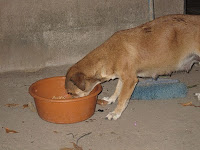 the dogs. Julia grabs the a big orange plastic bowl and reaches into the plastic food container which she keeps in the middle of the table (so the animals cannot reach it) and pushes aside an egg and half an onion to pull out the last of the chorizo.

Two days before, we had gone to the little corner store by the church before walking Julia's grandson to school. That was when we bought the chorizo. I wondered what new recipe Julia would be making with the chorizo. This was not something she had used in cooking during our many times together. On that day, after we had eaten dinner, she pulled out the big blue plastic bowl and filled it with broken up tortillas, some leftovers and some still-warm coffee water she had 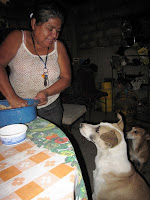 heated on the stove. She pulled out the little tube of chorizo and squeezed about a third of it into the bowl. With her hands she mushed it all up, squeezing the water and chorizo and leftovers into the tortillas.

"Some people do not take the time to feed their dogs. They say they don't have enough food. But I believe that all of God's creatures have an equal right to eat, don't they?" She waited for my answer.

Julia put the smaller share of freshly made dog food into a bowl for Pirate, her male watch dog. The big orange bowl went to Princess, the mama dog who is nursing a new litter of puppies. Julia said she will give the puppies away as presents to people who will love them.

I have been with Julia during times when 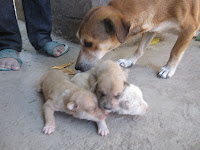 the dogs were fed the only food available: tortillas. During the times when there is more food, when she can buy a little chorizo, Julia often feeds the dogs plain tortillas so that "they don't become accustomed to only rich food and can survive as dogs who live in poverty."
Culture food Relationships